I’ve been building my Maslow over the last few days and am noticing that the stock frame design is a little wobbly. Anyone have some pictures of best practice frame reinforcement methods used by other builders?

lets have a conversation about 2x4’s and fastening systems. For my non US peeps please alter to MM in your head. I’m going to toss a premise out. If anyone wishes to argue or dispute it I will be glad to participate as long as you create a new thread where we can debate it. For the sake of argument we are going ot say a 2 x 4 is resistant to bending more on the edge of the 2 x4 rather that the 4x2 edge due to bias. One of the figures below shows this - [2by4] Further when you introduce…

Final frame. And some extra words to meet the 20 check requirements.

i was planning to make mine a torsion box, should be incredibly rigid. that combined with a horizontal beam on top should eliminate a lot of wobble, especially since mine will have to move around, or pivot to the roof, or stand up straight against the wall when not in use, and the floor of my garage isn’t exactly even.

The real critical thing is that the motors don’t move relative to each other.
Once you stop that, the rest of it doesn’t need to be especially strong, you
just need it to not be too warped (or the sled will ride on the hills and cuts
in the valleys won’t be as deep as you expect) 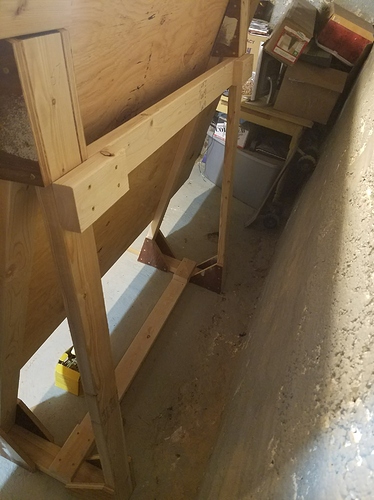