I had a problem with the bungee cords losing tension at the extra end of the sled travel. this was causing some issues with chain slack and jerking of the chain.

The new layout replaces the bungee with free hung weights which keep constant tension on the chains at all corners of the work surface.
I made two weights for each side, a 5 pound weight that stays attached all of the time and a 25 pound weight that can be removed when not in use or if I have to adjust the chain.I made then out of quick cement from Home Depot and some plastic buckets for molds 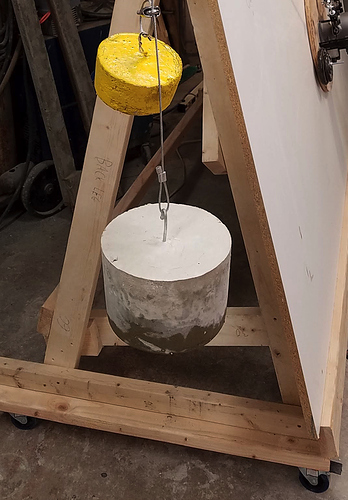 The weights were hung with wire cable. One pulley is used at each end of the top support to transfer the downward force to the idler gear that were attached to bungee cords before. 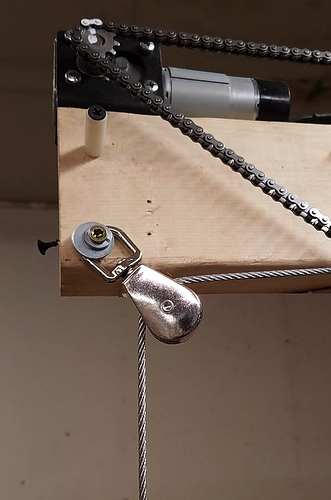 The results are excellent. Smooth movement. I may adjust the weights after more use. the lighter the weights the less wear and tear on the system.

Looks pretty slick to me. Are you still using the sprockets or is the cable attached directly to the chain?

other people have redirected the weight lines down the back at the center, this
looks easier to do.

you should be good with just the 5 pound weight, do you really need more weight
to control the chains?

Yes, still using the sprocket also using the metal ‘S’ that was used for attaching the old bungee cord to the sprocket. The only difference is the way the tensioning force is a weight instead of the bungee

How much clearance is there between where the cables and chains cross over each other? I am assuming the cable is behind the chain.

I had a design of running the cables down at the center but it was a mess. It needed two pulleys per line.
About the weight. I was guessing. For a while I had a 8x8x16 cement block that weight around 30 pounds and it worked great so I went with the same. I’ll give using less weight a try. The reason I do not use the blocks any more is because I dropped and broke one of them. Besides the rounds weights look cooler

Also, could you take a wider angle picture of your frame so we could see how it looks set up?

if you go to a auto repair shop you can get the old metal disk drums for dirt cheap maybe free and they are nice and heavy. you can get pullys from china for $1 each 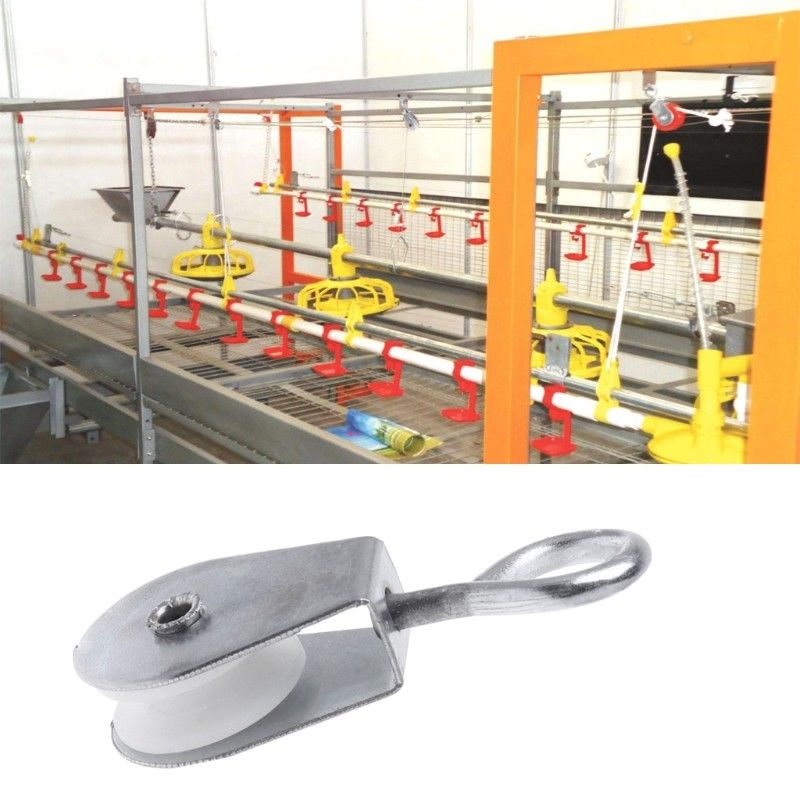 Best choice for poultry feeding。. Product Type: Wireline pulley. Size: Look at the picture. Due to the difference between different monitors, the picture may not reflect the actual color of the item. | eBay!

Gosh darn it, I just recycled mine 5 days ago when I was cleaning garage to make room for the Maslow

Thanks, I will second the request for more pictures if not to much of an imposition.

what is that silver hardware in the center where the two chains cross each other? Looks like a wood screw with a big washer and perhaps the two idler gears behind it??

Yeah, I thought about how cool it would be to incorporate those into the sled design. I used shim plates in place of bricks. 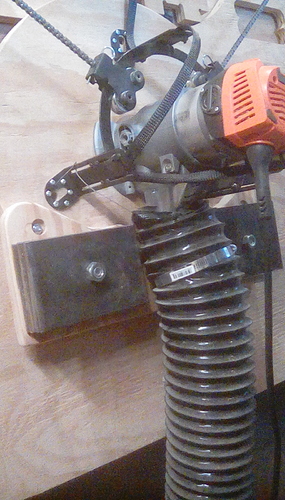 on the stock frame, the min tension is just over 3 pounds, so 5 pound weights
are about right (assuming that everything works)

I think he stated that those are the rollers that came with the Maslow which are normally used for the bungees. Looks like they are stacked on one screw and the cables ride on the rollers.

Can you post some additional pictures so that we can see the entire system?

I borrowed from @GaryInTulsa and cobbled together what you see here. 5 lb. weights, and paracord. I stacked the bearings that came with the machine on a nail with small lock washers (the size of the inner ring), and fender washers to shim it out from the board, between the bearings and on the end of the stack.

I cut out some letters for my daughter tonight and it worked flawlessly. Right now I can’t reach the upper corners without the slack chain/sprocket interfering with the bearings in the middle of the top bar. I will add extensions near the end of the motors to get the chain up out of the way and shorten the reach of the slack chain. I may add 2-3 lbs. on each side but it is working well with 5 per side. Almost forgot I put eye hooks half way between the pully and the bearings. Hope some find this useful. Thanks Gary. 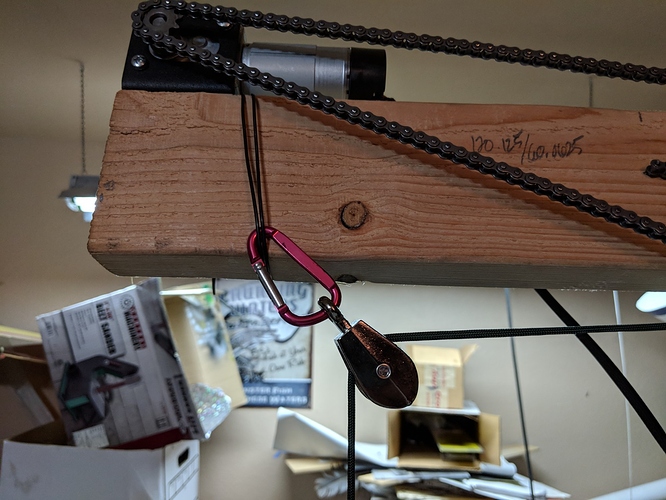 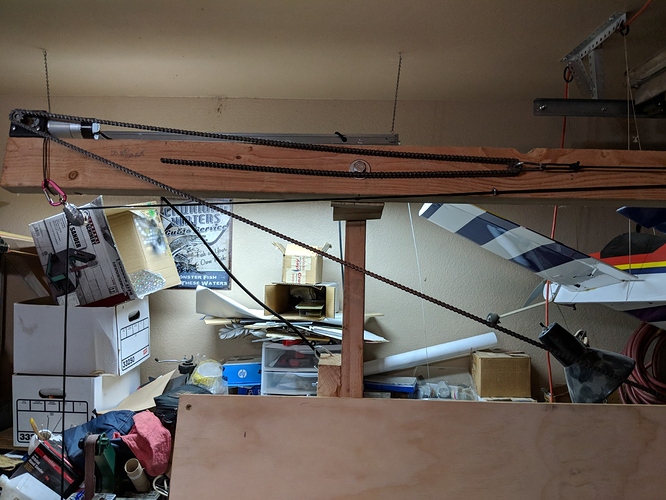 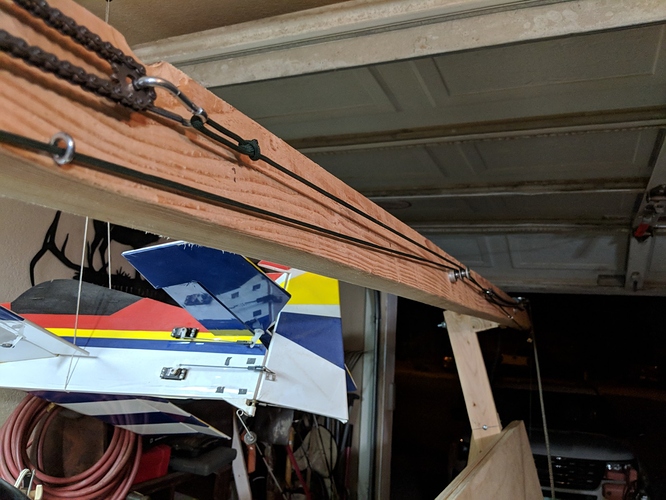 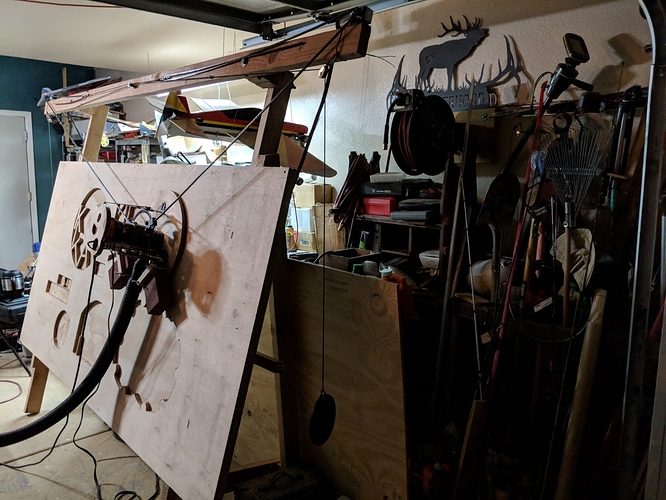 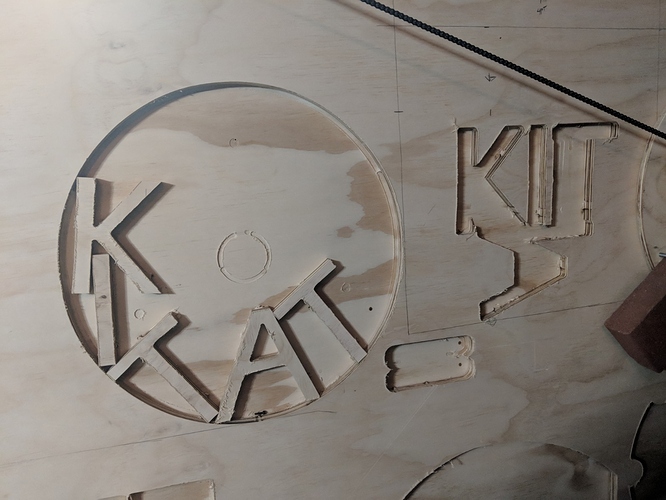 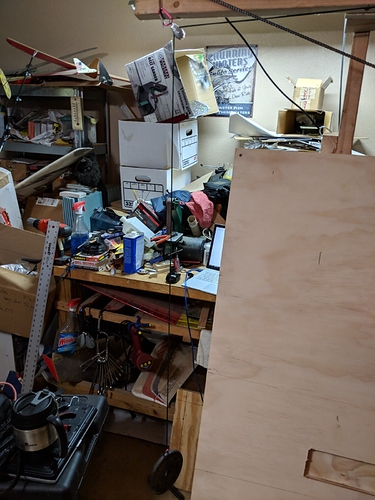 you should be able to move the slack ends of the chain out closer to the motors
to avoid them crossing the center of the machine.

The reason I finally got around to posting pic is because I had to breakdown the machine to move it to a new location. At the moment not sure when things will settle down enough to be able to set up the Maslow again

I used the bearing that the bungee would normally go on as wire cable guides to keep the cables from touching. It’s not the best picture but they can be seen right in the middle of the top board. the two bungee pulleys and a large washer all on the same nail

Looks great. Glad to hear it’s working for you.