I’m working on an option for router Z depth control that might work better for the folks who can’t find fixed-base routers. It would use a plunge base instead, with the springs and brake removed.

The design I have so far would need the motor drive to be reliably stationary during operation to prevent wandering during motion.

Have there been any issues reported with the stock z motor rotating when idle? Is the gearbox a worm type like the main motors?

The gearbxes on the z motors aren’t worm drive, but are highly geared. I’ve messed with three different brands/gear-ratios, and they all hold their position against moderate back pressure.

I’ve been looking at this thread. Are you thinking along those lines?

Sort of; I was thinking more along the lines of a traditional CNC x-axis (lead screw) that attaches to where the handles usually go, or maybe something that clamps to the handles themselves.

Depending on how strong the motor is, you may even be able to leave the springs as well.

I like that the plunge bases are meant for what we would be using them for; nice linear motion with appropriate clearances, etc. I dislike the lack of an inbuilt drive mech but given the relative rarity of fixed base routers elsewhere, I’m hoping to give a good starting point for anyone who wants to cut their own x-axis solution.

I’m sort of weighing “universal” solution against “how much should I expect to disassemble my plunge base”.

If you’re going to make a z-axis, I don’t know why you would use a modified wood router.

A decent 800w/1200w spindle is not expensive and there are a ton of standard mounts that will fit any number of off-the-shelf stepper-powered motion-control rigs.

Not that it’s of as much import, but their runout is much better than a plunge router.

If you look at the main Aussie thread I did a really quick and dirty POC on my old old ozito and didn’t see and torque issues with the motor. the thread and nut were really standard off the shelf with some silicon spray on it and the router had both springs in so seemed to be fine

A mechanism similar to this, with a 1.5kw air-cooled AC spindle with an ER11 collet will set you back about US$200 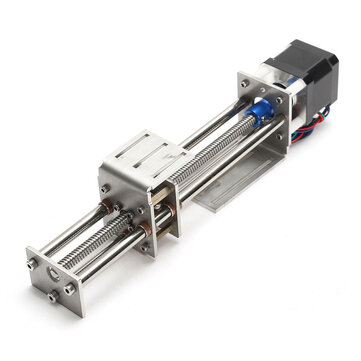 Shop around and you can get the spindle and motion-control setup as a unit.

If you have a few bucks extra, look at the C-Beam actuators from Openbuilds - which will never go out of style, as it can interface with any 20-series extrusion and the host of openbuilds rail systems. https://openbuildspartstore.com/c-beam-linear-actuator-bundle/

I’ll check that out. Thanks!

I’m thinking more along the lines of a $10 lead screw from Amazon and parts you cut out of plywood with your Maslow.

As would I, but I’m not the one having difficulty with integrating a spinning, moving motor. Done it many times before.

I prefer to work in aluminium, though, although I’ve been doing a lot with lasered acrylic, lately.

one issue is that plunge routers are designed to be held by the handles and
moved, not held by their bases and moved. As such they are significantly less
rigid.

I would go with a spindle arrangement rather than trying to adapt a plunge
router.