Has anyone modeled the ridgid router latch?

I’m having problems with the latch slipping and letting the router plunge. looking at it, the top of the latch is rounded, and the latch is sitting at quite an angle, so it’s a bad situation. I know that the orange part has been modeled, but has the entire latch been modeled by anyone? I was thinking that printing a new latch would possibly work better than the stock one as it would not angle as badly and so sit in the router better. I may even be able to do a production run and cut them in metal if the idea works.

good luck. would be awesome if the stock z axis actually worked well because so many have this issue. best to buy the chinese lead screw and make your own IMHO. $15.

unfortunately it says that it didn’t quite fit (and it goes to a lot of effort to exactly match the shape of the original, which it doesn’t actually need to do)

still looking and starting to model.

It appears that this piece may have changed over time. The version on my maslow is angled a lot, so either it has worn badly (1/8" or more) or there was a lot more play in that version than in the piece I have from another router.

I created a model (except for the acme thread), I’ll try to get it printed out soon to see how it can work.

well one can always just drop in an acme nut 3/8-8 inside the 3d model if you want really durable threads, only problem is they are pretty much mail order only. most hardware stores will not stock

McMaster-Carr is the complete source for your plant with over 580,000 products. 98% of products ordered ship from stock and deliver same or next day.

looking at it closely, I think it’s square thread, not acme

I’ve got the model including square thread, so we’ll see if it’s right when
somone can print it

I tried printing a copy and found I didn’t have the threads right, I’ve modified it so it’s now a proper 1/2-8 acme thread and will have to try printing it again.

even the botched copy I had showed that it was a good fit to the latch slot, far better than the stock latch.

It turns out that my stock metal one had worn just enough to have the edge of the hole match the thread and so it wasn’t turning and wearing on the orange button, but on the metal edge, but at quite a steep angle.

I’m hoping that the M5 screw will end up being a good enough handle to unlatch the router, otherwise I’ll need to add a grip for that purpose. 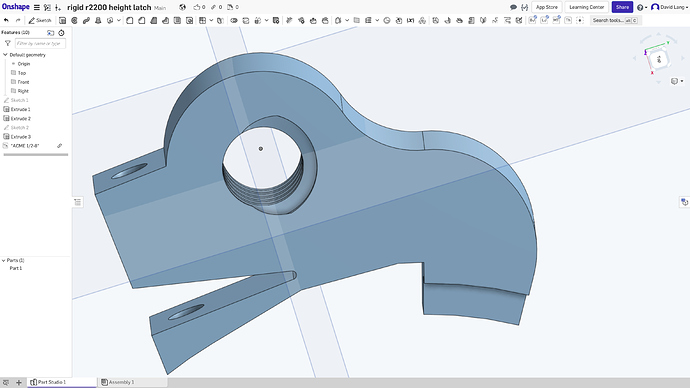