I have been able to create 2d parts.

But please help understand how I can go to 2.5d relief with as little learning curve as possible. I see Vcarve and Fusion mentioned. But I cant tell from forums if vcarve works with maslow, and fusion is not intuitive for me-

So a simple workflow with a known program that works with maslow please.

For example I like the idea of cutting out cabinet doors with a relief of a bass fish etc.

what is your process that you use today?

you can use pretty much any CAD/CAM software you want, set it to output for grbl
and the g-code should work.

Well I created a gcode in vcarve trial. And it seems to be running just fine. maslow is out there carving away. Thanks.

Maslow did not run fine. AFter about 30 minutes of perfection,V-Carve 1.gcode (196.2 KB) It ended up losing control of z-axis and drove a deep groove all the way across the carving. And it simply did not plunge at all in others.

I used the bull head sign sample file on vcarve. I do not know how to identify where it went wrong or why. Attached is the g code

Are you using a factory router base for your Z axis movements or did you upgrade to something different?

I used the base that came with the router. It’s the rigid model suggested in the forums.

If you want to get really crazy, this is the route I have been planning to take. Although my Maslow has been in a box since the second shipment of original Maslow kits shipped.

This is a companion discussion topic for the original entry at http://maslowcommunitygarden.org/The-Meticulous-Z-Axis.html

It ended up losing control of z-axis and drove a deep groove all the way
across the carving.

This probably means that it popped out of the notch, it may be that you have it
too loose in the base (you want to loosen the bolt under the latch just enough
for it to move, if it’s too loose, it can pop out)

And it simply did not plunge at all in others.

this probably is due to needing a bungee across the top of the router.

Okay I went back and checked everything, adjusted the latch, have the bungee cord. And it did still drag a very fine line in the exact same place.

So a huge improvement. But still. I think the gcod is moving the bit before it is fully retracted as it made no attempt to lift it at that operation. So far the rest looks good- half about half an hour to code.

Is there an easy way to locate the line of code when it has a thousand lines of code? I tried to click on the red dot where I think it started but it didnt highlight the associated gcode.

I am thinking of trying this design in easel versus vcarve and see if it makes a difference. Easel did perfectly cutting cabinet parts. I know this is probably 100 % user not software but I am out of my depth and trying to get it to work.

what version of firmware/GC are you using? there was a bug a year or so ago that
started XY movement before Z movement finishedl

if you hit stop/pause when it starts misbehaving, you can then look in the
logfile to see what has been sent

Okay I will check.

Attached is a photo of the two attempts at carving using vcarve gcode.

There is only one line wrong I can see- but I am not sure the router made it or if it was a defect in wood. Cutting a 4th one now. 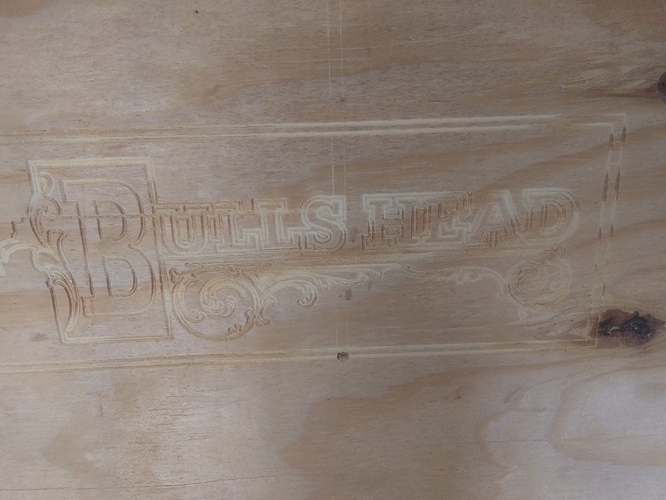 I cut this a 4th time and the Same horizontal line appeared again. You can see it in the photo above. going thru the text “BULLS”.bulls.nc (125.7 KB)

I attached this second gcode from easel

Thanks. I mean it is running much better than the first two times but I dont know why it’s not retracting.

I did have to restart the 4th try over as it kept throwing sled not keeping up error. So I moved lower on the board and redone it. And it is identical to photo above so attempts 3 and 4 are identical.

try raising your z safe height. it might be that your board is warped, and it’s not raising it quite enough to clear the warped section.

Missed this earlier. The Sainsmart 3018 Facebook group (I hate faceplant…) is reporting the exact same problem with Easel. I’ve been using the free Carbide Create with my dimensionally challenged mini router, no issues, not have the fusion 360 users complained about similar problems.

If you haven’t resolved it see if you can save your Easel design as a vector (svg or dxf) file and trying another CAM tool. You’ll have to redefine your toolpaths, a nuisance but it might get rid of the bit dragging on rapids