Anyone ever try VCARVE Pro software for 3D relief carving?

The large size of the Maslow is perfect for relief carving parts for furniture. 3’ x 3’ CNC tables are impossible to tile work on for large projects. I want to create Victorian era furniture which is very ornate. Serious artwork. I bought an old Victorian and it literally has no closets. Armoires are expensive. I love wood working so I’d rate use this if possible. That would be so cool to do the intricate carvings (vines with leaves, grapes, lion’s heads et al). before I buy a $2000 plus machine that only cuts 3’ x 3’ projects in 2D, I’d much rather pursue this and support the Maslow, limited experience that I have and all.

I have been working on enabling coordinated 3 axis movement. As you can see below, I think I am about there, I just need to test it a bit more. [IMG_20170730_190148][IMG_20170730_190137] This was cut with a flat end mill. A ball mill obviously would have produced a nicer result. Keep in mind, based on the design of the Maslow, this isn’t really something it is ever going to excel at. But there may be times when doing a 2D contour when full coordinated motion like this would be nice. It m…

the problem is if the sled sits on the relief being cut out. so if a large portion of the relief is below the original plane of wood, then the sled will tilt and you will get a messed up carving.

also as above thread states. ground control G2 G3 was never implemented so changing the Z axis while rotating is not supported.

I have never done relief work, but hopefully that helps you above.

Thanks. I know it doesn’t have a Z axis. It was a dumb question. Too bad there isn’t a Z, that would be phenomenal.

it has a z axis. But the original Z Axis isnt’ that percise and pretty slow too. . Several forum members are using much stronger z axis as well.

Thanks for answering my questions. I was thinking it was X,Y only with manually adjust for a single Z measurement. Maybe one day someone will make Z fully usable and provide the relief carving I’m looking for.

Is there a common Servo or Stepper that folks are using when they upgrade to a more robust Z motor?

you can’t use servo motors with maslow. It uses dc gear motors with encoders.
stock z axis is 12rpm and pretty slow
people have upgraded it to one on amazon that is about 122rpm. 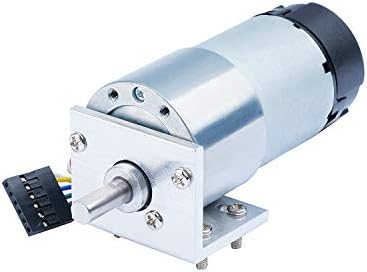 
most of the people that have upgraded are using lighter routers, not sure this 10x faster motor has enough torque for a r22002 router unless you have it very well balanced on a smooth z axis.

Ghostman a proper z axis is already done by several members. I do not know a lot about g code. but it sounds like the G2, g3 commands are usefull for things like fancy scroll work and also for practical things like helical hole cutting where the z axis is continually changed to drill a circle out.

That’s confusing to me because I use F360 and have cut helical holes for certain operations, as well as rudimentary V-Carving.

It seems to be doing coordinated movements to me. I definitely need to invest in a better V-Bit before I say the V-Carving is up to snuff though.

I’m waiting on my Maslow to ship with this next round, and I don’t have any CNC experience yet, most of my “knowledge” is from reading on the web, so take my comments and/or thoughts with that in mind.

I’ve been mulling over the 3d carving issue in my head (I have some 3d projects in mind too), and the sled support issue as mentioned above is definitely a conundrum. Would it make sense to design in “support columns” that don’t get removed until the piece is completely carved, then come back and carefully carve out the columns by hand after completion? If the columns are appropriately spaced and sized to sufficiently support the sled, perhaps a grid pattern where 3, 4 or 5 columns support the sled at any given time, that would give the Maslow the ability to do 2.5 axis carving.

Granted, it would require some hand work in the end, but so does removing tabs. The bulk would be CNC.

the thing with 3d carving is it can take hours, sometimes days. Especially if you are doing something huge.
I would imagine that with a big thin aluminum sled say 25" in diameter one could easily do a 20x20" area with the sled always having enough surface area. Now if it’s a long skinny carving say 12" by 48" that would work too.

if you want to do much bigger than that, probabaly should look at a different machine.

And there have not been any 3d carvings done on the maslow that I know of either. Other than the square pyramid. so it’s uncharted waters. Not sure the detail will be good enough to give smooth surface finish, only half a dozen people have a self made z axis that is possibly accurate enough to accomplish the job.

I’m working from JimLogic v1.0, which will be upgraded substantially once I get a Maslow, set it up and cut a few pieces. Of course, everyone’s <insert_name>Logic vX.X is at a different level of refinement as related to a particular topic.

My semi-educated logic tells me that in any given 3D cut on a hanging system like Maslow, the sled needs uncut support in at least 3 points within the diameter of the sled, preferably triangulated on different sides of the bit, planes and triangulation being what they are. Distance between uncut support columns would need to be less than the radius of the sled, or if square sled, less than the distance from the bit to the nearest side. So, if I take the given example of a 25" diameter sled working a 20" x 20" piece, you will need uncut support somewhere less than 12", or roughly in the center of your 20x20 square. Actually, to work the corners of the square, you’d need 4 supports inset a calculated distance inside that particular square, since no support could be further than 12" from the bit.

There may be flaws in my logic. Feel free to poke holes! I love the discussion.
–Jim

true but a lot of 3d carving has areas that remainn flat as boarders or just plain uncut areas. anyways not going to get too involved since no one has done it yet. once more people start upgrading to a better z axis there might be more people doing this.

A refinement would require that none of the support points lie within the center circle around the bit. A specialized carving sled might reduce the size of that circle with that in mind.

Similar to cutting a zero kerf insert on a table saw, that makes sense.
Jim

A specialized carving sled might reduce the size of that circle with that in mind.

Or, another thought, reduce the distance between support columns using a formula M = r * .75 where M is the maximum distance on center of support posts, r is the sled radius, and the multiplier may change depending on the size of the sled’s center circle.

Thanks. I’ll look into it.

Someone explained that Maslow is perfect for 2D but with the table angled like it is, the higher the Z axis is, the more likely the cut will be bad. Gravity isn’t friendly here. Plus moving the Z axis would be really difficult unless you laid the table flat and built some strong support for the Z axis rotor so it won’t flex. At that point, you have created a Large Shapeoko 3 XXXXXXXL machine. Which, honestly, I wish someone would create from this. I want to build some Victorian and Gothic beds with canopies, armoires and the like. The Maslow is great for cutting the big pieces, and then maybe I can use a Shapeoko to make the ornamental details. The drawback is the Shapeoko can’t do long pieces unless I tile them together. But it looks like that’s what I’ll be doing. Still the Maslow is a really great tool for large item cutting - like headboards, doors, et al.

this might be more the machine for you. They sell a kit, but you still have to buy the router, steel tubes and program it all. cost is about the same. $600 ot $800 range. also very slow cut speeds.