I put my linkage kit together!

I put my linkage kit together yesterday using the excellent and clear instructions here: https://github.com/MaslowCNC/Mechanics/wiki/Triangulation-linkage-kit-assembly-instructions (Thanks @pillageTHENburn)

It went together pretty quick, and after letting the glue dry overnight I was able to do some initial testing.

I got my calibration dialed in by running this file 1780mm Distance Test.nc (128 Bytes)

It should result in two vertical marks 1780mm apart when measured from the left side of one mark to the left side of the other. It took me about three times of adjusting the “Rotation Radius” variable in Ground Control’s advanced settings menu to get things dialed in well enough to give it a test run. It might be nice to have a good starting value what the rotation radius (distance from the end of the chain to the center of the router bit) would be if the kit is assembled perfectly.

The first thing I cut was a template which I’m going to use to cut a hole in the wall for putting in a window. It’s big enough that I thought it would be a good first test because any distortion would show up easily.

Somehow I forgot to put tabs on the middle part

so you can see it drop down and then I “fast forward” the gcode program until the next cut. 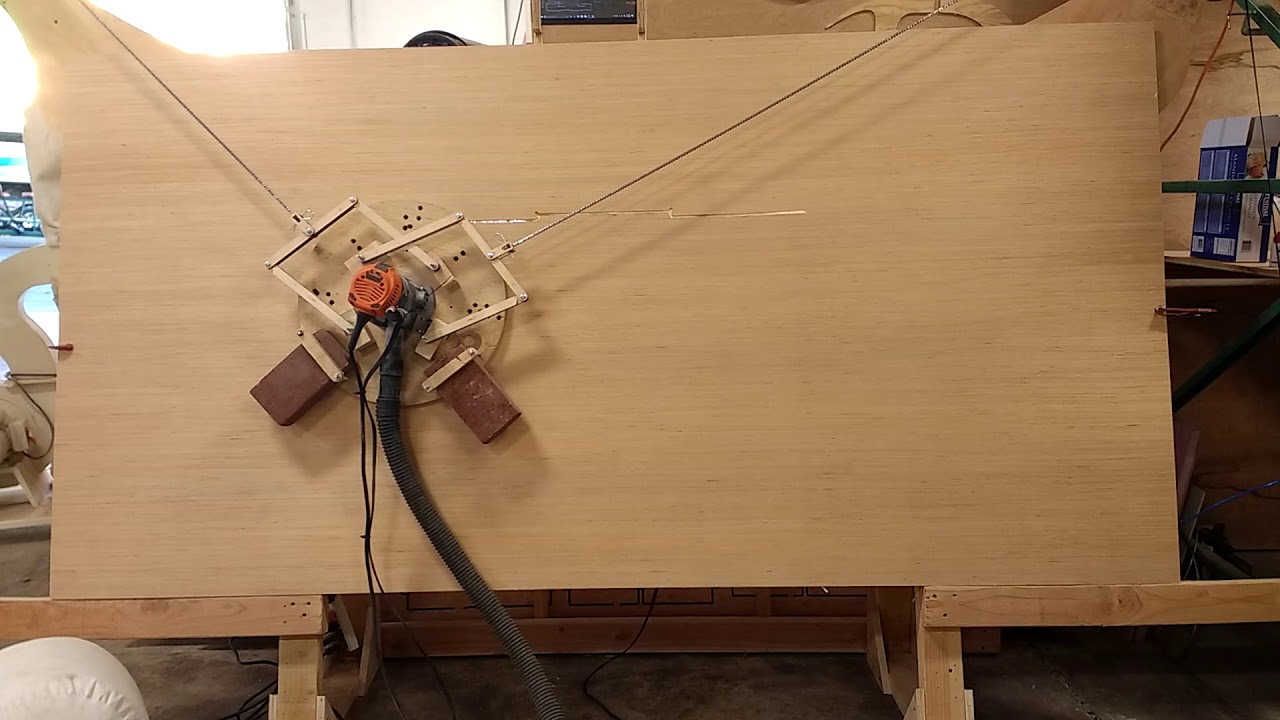 You can see in the video that my left linkage doesn’t move nearly as much as the right so I think I need to work it back and forth a little bit to get it everything broken in a little more. Even so the part came out well. It was a rectangle (no distortion towards the top or bottom) and the dimensions all matched the CAD drawing to within what I could measure with a tape measure.

I’ll need to keep dialing it in, but as a first test it seems very successful

It should be about 269.7mm from the center of the bit to the bit-side face of piece G2 (where the cotter pin in the chain rests). If we are measuring the actual chain then you’d have to subtract whatever amount of chain protrudes in past that face on G2. This amount will differ slightly (<~1mm?) depending on if you use the cotter pins like you did, through the spaces in the chain; or if you run a pin through the actual chain pin hole.

It does look like there’s a little “stickage” happening in that video. I found working the joints a little made them happier. If you find you have a problem joint you could always ream it slightly; I had a problem spot in an early test and I just used a 1/4" screwdriver shank, so I didn’t actually remove any material, I just “burnished” the spot that had a problem and that helped a ton.

This kit is fantastic!

I was seeing a little “sticking” but it was all my fault. I took a look at it again and the issue was that my arms (in particular my ‘A’ arm on the left side) were rubbing against the wood blocks I used to raise up the linkage system. Adding a washer to lift the ‘A’ linkage up a little a LOT so I think I might just need to rethink my blocks. Amazingly, even with the rubbing the part came out great.

I really truly just threw everything together and that was my very first cut.

Here’s take two (with some slight tweaks to the CAD file):

That looks way smoother! It sure is fun to watch it do its thing!!

That is truly mesmerizing to watch.

How tall did you make your riser blocks that the linkages rest on? Do you recommend that height?

I used sections of 2x4. They could be a little higher, and the rubbing I mentioned above is an issue so I’m not sure I would recommend them necessarily, but they do work and it was easy to put together. I’m sure there is a better solution out there and I’m curious to see what everyone does

with the ridgid router and two bricks, what are you finding is the best distance
from the sled to the chains? 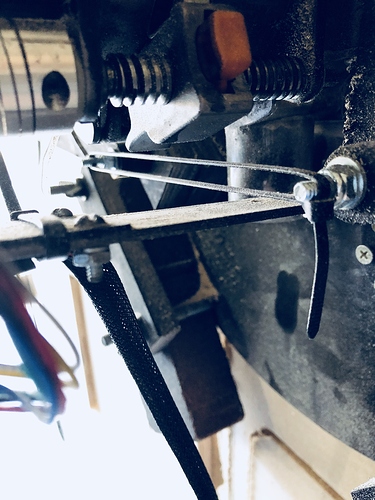 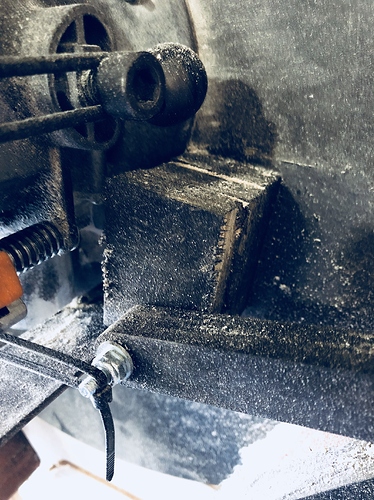 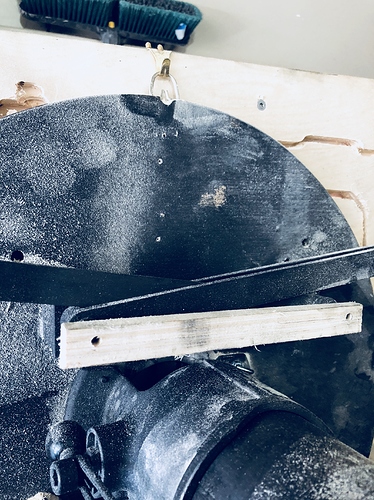 I used 3 small 3/4 inch blocks stacked for each linkage the first go round, but the cuts became skewed after awhile. Come to find out the lower left linkage block broke and the bolt was pulled away by about 1 cm. So I beefed up the blocks and supported the end of the bolts. Top bolts want to converge in horizontal plane and the lower bolts have divergent pull.

I think sliding/lock motor mount brackets or bases would be helpful to get the chains aligned in the z plane. Especially when cutting on various ply thicknesses.

I don’t think that the machine is as sensitive to the motor alignment as you are
thinking. I expect that you can get close to ±1" before running into real
problems. Going ± 1/2" should be no problem at all (that takes you from 1/4"
plywood to 1 1/4" if yo make the chains perfectly parallel for 3/4" plywood)

Think about the amount that a 10 speed chain moves across the rear sprocket and
how that doesn’t matter to the front sprocket.

We had some problems early on with the slack side jumping, but wrapping around
more of the sprocket and adding some tension solved that problem.

I feel like ultimately a block like this might be a great solution, especially if it is not only glued but also attached with screws from the bottom of the sled: 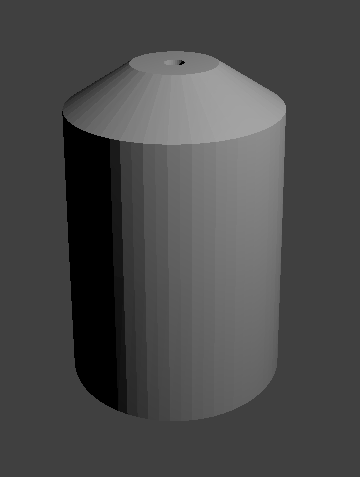 I have not had any block flexing/breaking problems (even when I was overloading my sled with 75 pounds!) however when my chains were not well aligned I did notice one arm tended to catch the edge of the block. I figured when I build a real sled I was going to “chamfer” the top edges of the mounting blocks a little to give plenty of clearance and allow for minor chain alignment differences (when cutting different thicknesses of material).

If you also use screws from the back (pre-drill of course) I bet pieces of a closet rod would work great for spacer blocks. Just grind or cut away a little of that top edge and you should be good to go! Rigid spacers between mounting posts like @clintloggins shows is also a good idea if you are running into problems. I had to do that with the top mounted version I made early on…

I made blocks by drilling circles from 3/4" plywood and gluing them together. I then counter sunk a nut and washer on the top to secure the block. On top of that there is a large washer then the link and small washer and lock nut. It seems very sturdy. I did not glue the block to the sled. I don’t have my Maslow kit yet so I cant say how it holds up. 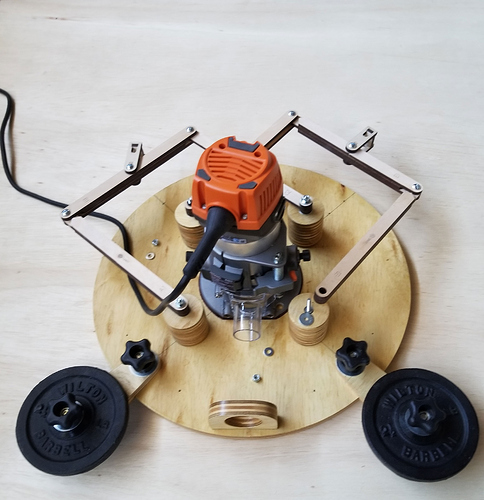 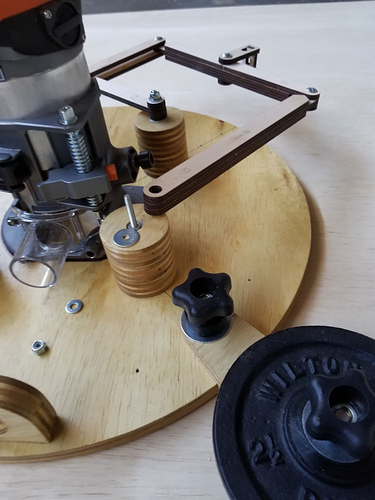 That is a great solution Rich.

Looks nice! You may have to rotate your router a bit clockwise to fit the Z axis in there next to the lower right linkage point, it looks close. But, very nice sled, I like the weights and the dust collection holder.

What a beautiful build! I’m jealous

I am wondering how best to do the Z axis. That is a good idea to rotate the router. I was thinking maybe the lower metal Z axis L brace could be counter sunk under the router. So it would be more of a C than a Z. I had those weights laying around and rusting so, painted them and put them on. Cooler than bricks.

Yes, but being the Trekkie that I am, The bricks on mine are set like Nacelles. I am going to paint it with an NCC number to fly around on the cutting surface. Lol:grin:

That looks fantastic! I really like your attention to detail!

I was thinking maybe the lower metal Z axis L brace could be counter sunk under the router.

I like that idea too, for that matter it could remain a Z and be countersunk under your cylindrical standoff if it happens to be in the way (since you didn’t glue them)…

LOL, I can actually picture that. Good one!