Since I am a new user, I do not have the ability to upload a file yet. Email me and I will send you the .NC file if you think it will help. andrew((DOT))s((DOT))sears((ya know))gmail.com. It is my first project and a shop stool.

Summary:
I am creating my files using inventor HSM. When I post process, I can save my .NC file and I see a lot of choices for post processor configuration so wondering if that is part of my problem. The problem I have is my run looks like a birds nest in ground control. 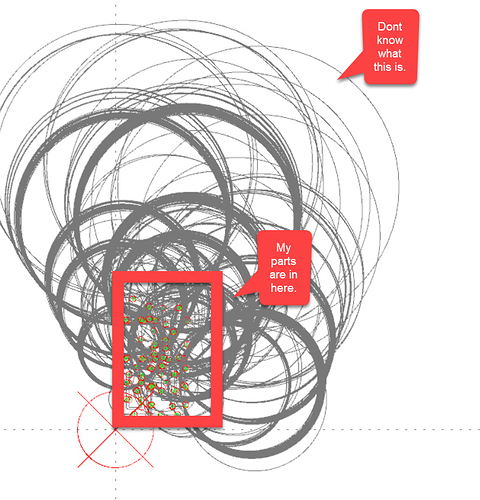 First, some questions. Which version of GroundControl are you using? Some of the older versions had problems with arcs. Are you using metric or inch units?

Some gcode processors take coordinates out to many digits beyond the decimal point, and that precision is lost if the program reading the gcodes truncates the values. Wild arcs like those can happen when coordinates are truncated.
Try looking at the .nc file using an online gcode viewer like this one - does it look right there?
Also, you can drag/drop the .nc file onto a forum post, where folks could study it, and maybe bring help. Can’t wait to see what is hiding in that haystack in your picture!

Sorry I forgot about the time limit on uploading for new users,

. I think it is relaxed after a day. I would suggest that you edit your message, though, to remove the machine-readable email address for your security. Use something like username-at-someplace-dot-suffix to confuse the simpler spam bots

Thanks for the tip! Edit made to my email. I am so new to CAM that the .nc file information just looks like the matrix did the first time I saw that movie. I am looking into it more so I can understand it but right now I can’t tell what is right. 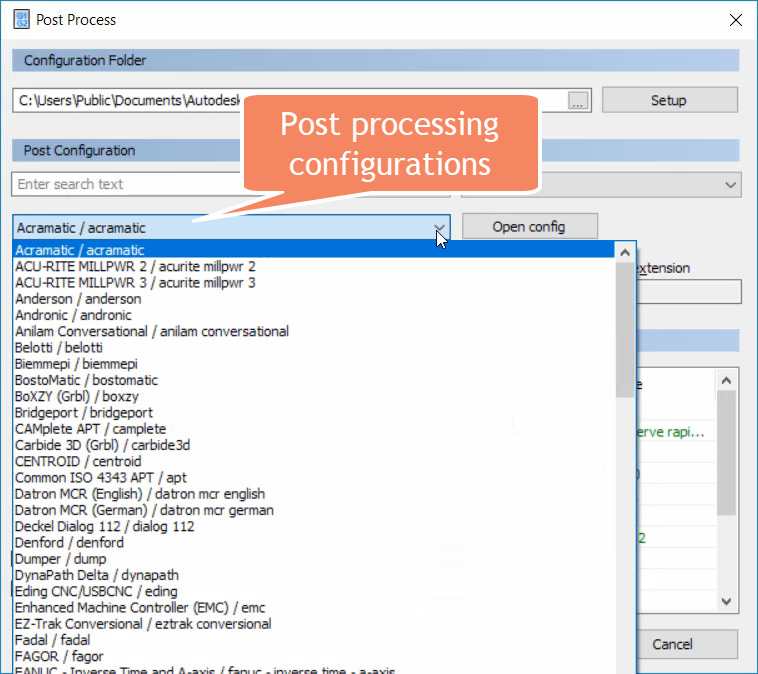 Here is a screen shot of the .nc file in my editor. Does this look like something that would get truncated? 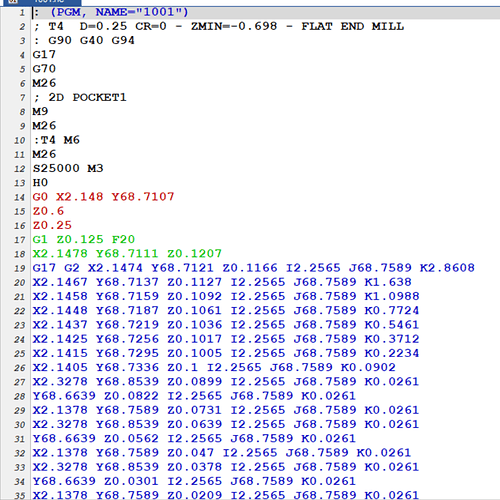 My design units were inch/deg/sec but GC started in mm. Not sure if that makes a difference but it was messed up on import to start. I do not have wild precision defined and made sure curve splines were somewhat rough for this test.

In general, the Maslow firmware tries to use the grbl format, so if there is a simple generic ‘grbl’ choice in the list, that is where I would start. Other choices labeled with grbl might do too, though they might implement special commands or sequences that make sense on the intended equipment but might not be implemented on the Maslow. Trying a different choice would be a good place to start.

Looking at the .nc file it looks like the coordinates are truncated at four digits, so that shouldn’t be what’s causing the issue.

The tool path in the first blue line is a complex clockwise circular path moving in the X Y plane (G17)and in the Z direction simultaneously around a point defined by I and J. Looking into the present firmware, I don’t thing the G2 and G3 gcodes accept a Z axis parameter. I could be wrong about that, though.
It also seems odd to me that the line would include a K parameter as that’s not in the XY plane (G17). I don’t have the knowing of the gcodes to that level, though.

Again, I think best hope is trying a different choice from the list of post processors. Maybe someone with experience with one of the various Autodesk tools will chime in with good advice.

I have a generic GRBL format and it looks a lot better in GC! I sent you both files in a private message until I get permissions to post in the forum. The orientation is 90 deg off from my setup so looking into that.

I work at Autodesk on Fusion but on the modeling and simulation stuff. We have a really great HSM CAM guy in the office. I sent this to him also.

I will look into the definitions of the parameters so I know more. Thanks for helping me get started! This is going much faster than I expected and people on the forum have been super helpful! I started 3 hours ago with a box of parts and have motors running…on my desk at least, until tomorrow.

@Andrew_Sears, here are the .nc files you wanted posted.
The first one, which does render as an impressive bird’s nest!
1001.nc (254.5 KB)
and here’s the second one, which looks much better 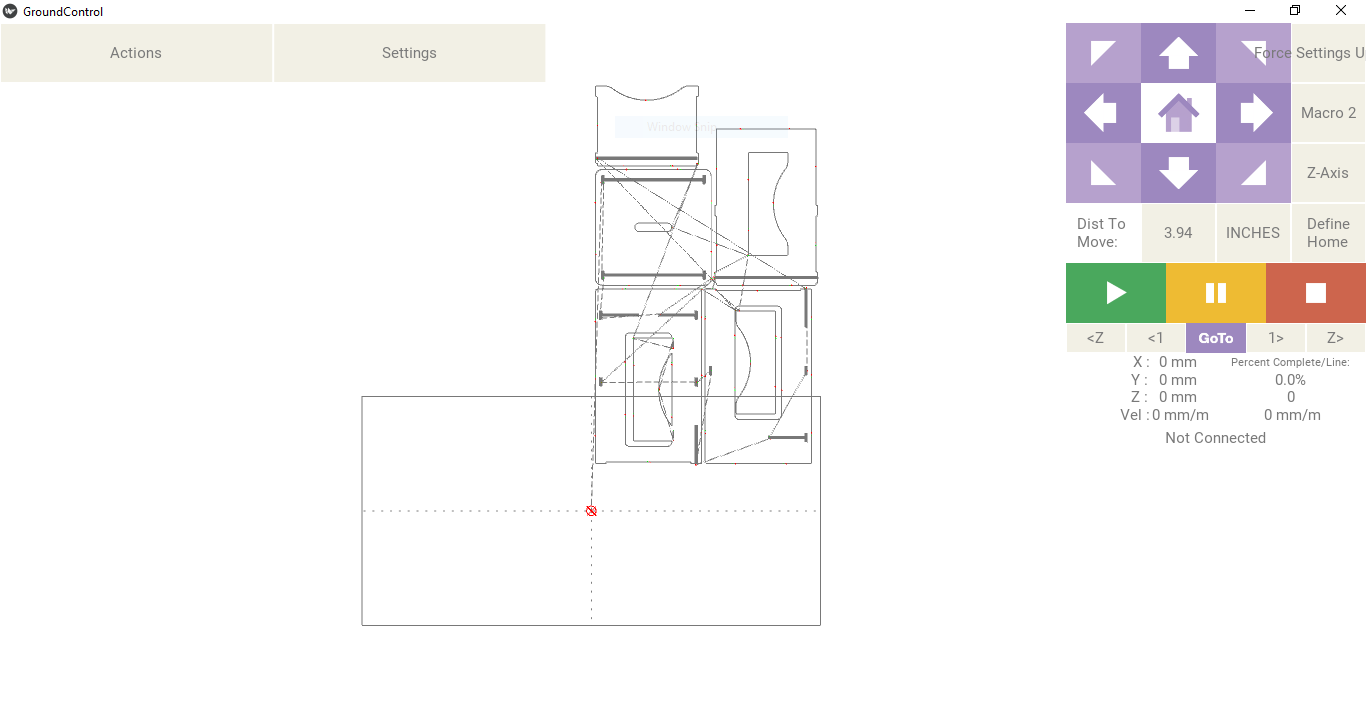 Other than the 90 degree rotation that looks great! I think you’ve found the post processor, but I would maybe do a small test cut first to make sure the file runs OK also.

Please note that there is a post processor for the Maslow:
Find it here

On this thread, there is a link to the Maslow file. I downloaded the file but have not tried processing with it yet.

you just download it and put it the post processor file folder then scroll down to it. On my machine Inventor remembers my choice, but I can’t remember if I had to tick a box for that.

Things look a lot better! It was in my pre-processing. I did not have the center set to the model center or the x and y orientation the way GC needs. 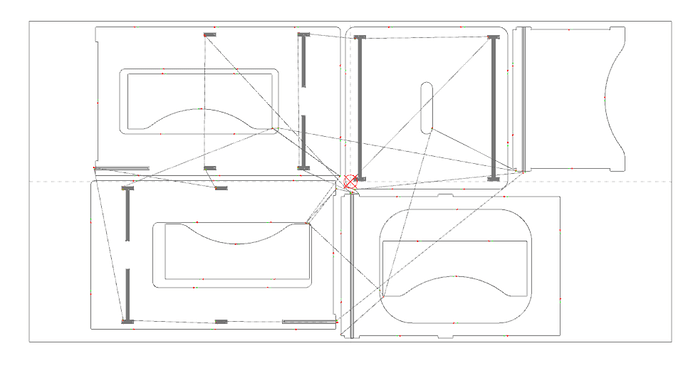 @bar, thanks for the tip on the small test cut. Hopefully today I will be cutting something. Forget to order a carbide bit so trying to find something here in Portland/Clackamas area.

@Keith, I will look into the post processor you mentioned.