I like your modifications to the stock frame. I may look at doing something like that as a temporary measure until I fully rebuild my frame. But I saw a problem in the last picture you posted that suggests you need to recalibrate… the spear you intended to cut out came out looking like a gator head… go noles!

Thanks for the extra information
Great set up
Thanks again

With the old setup the chain was binding on the outfeed side and wrapping up in a big knot. I had tried to get all the chain on the same plane as the sprocket but was still having the issue, as well as skips when at top center. With under feed set up i’v had zero issues. Also, the two liters hang behind cutting surface so I think I can slide sheets on, off, and to the side now.

That’s a great looking Malsow! Just a thought - I was under the impression that the main advantage for putting the chains on top with the bottom feed was to free the space on the side that the vertical chains were using up. With your counter weight system, you’re using the exact same space so wouldn’t it be easier to just use the before standard of putting the chains vertically on the side with the top chain configuration? With that setup, the elastics mixed with gravity were enough.

a slight difference. In the original design, the bungee cords and chains were up even with the bottom of the workpiece in the front, the weights hang straight down in the back.

the other big thing is that you don’t have the long lever of the chain trying to pull it out of the plane of the sprockets, so gear skipping should be greatly reduced.

I like the rope through the eye screws with the counter weights. I bought some 1/8 cord and if I get it tight enough for the shorter lengths it ends up being way too tight at the longer lengths.

I’ve been experimenting with replacing my bungee with the 3/16ths cord sold here: Amazon and so far it’s been working really well.

I used zip ties to loop the ends because it was too thick to tie a knot in. 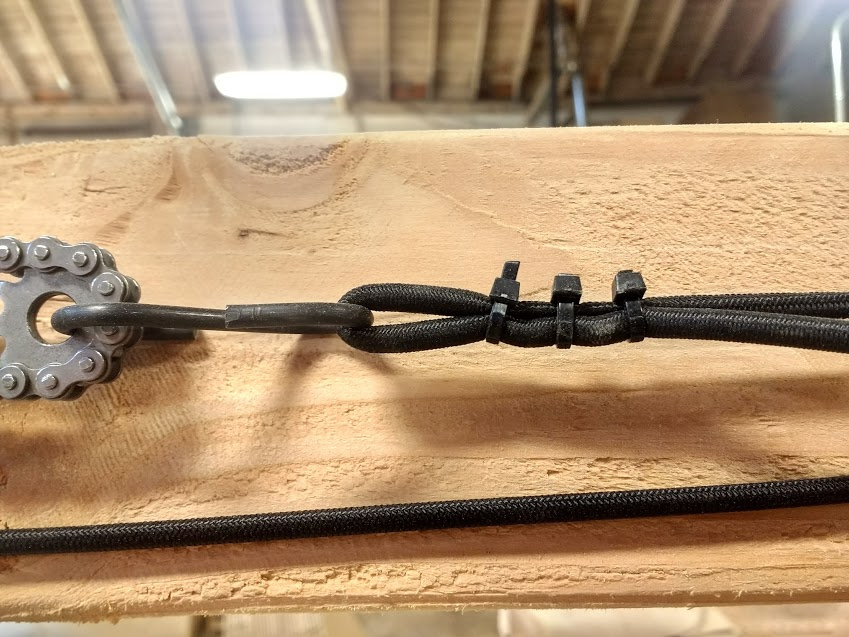 When I was experimenting with the horizontal setup I swapped the s-hooks out for quick links because the s hooks had a tendency to catch. Think I may have to order some of that thicker bungee.

Here’s a quick video which isn’t about the bungee solution, but it shows it in action over a portion of the work surface: 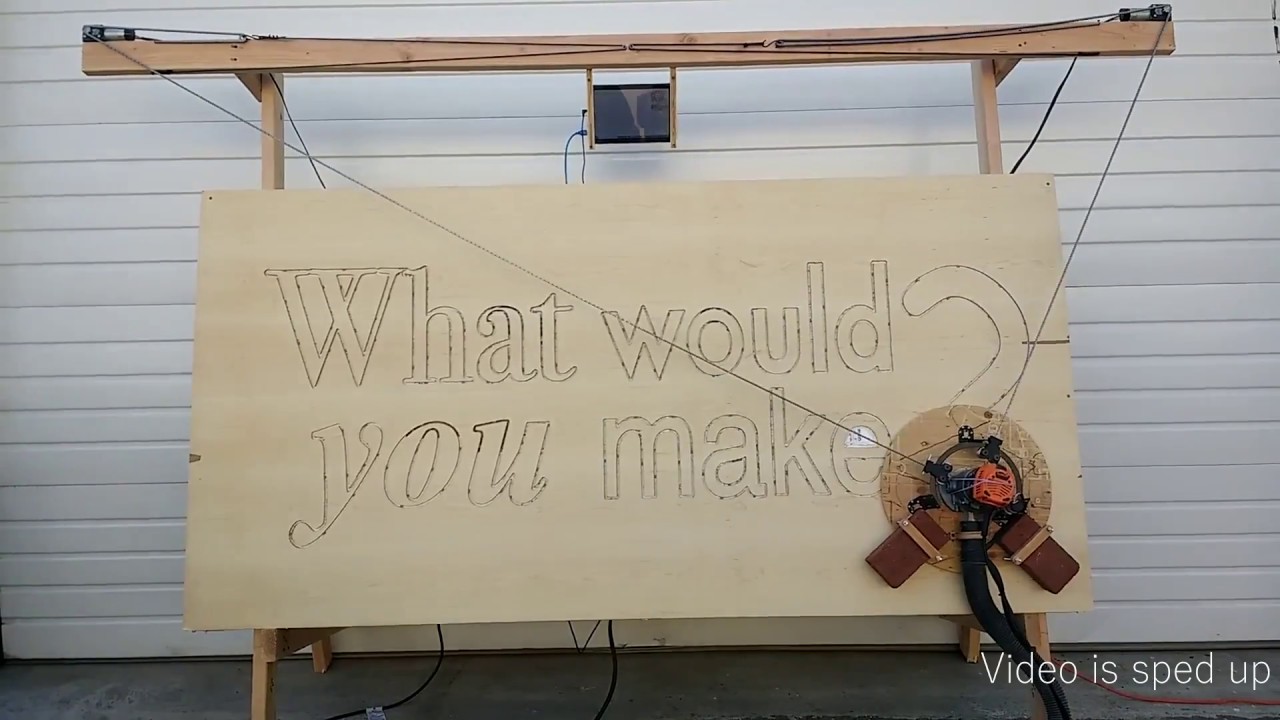 In the meantime, get a 30" long bungee that will stretch to about 80" and add it to the stock set-up… Just put it onto the existing S hooks… 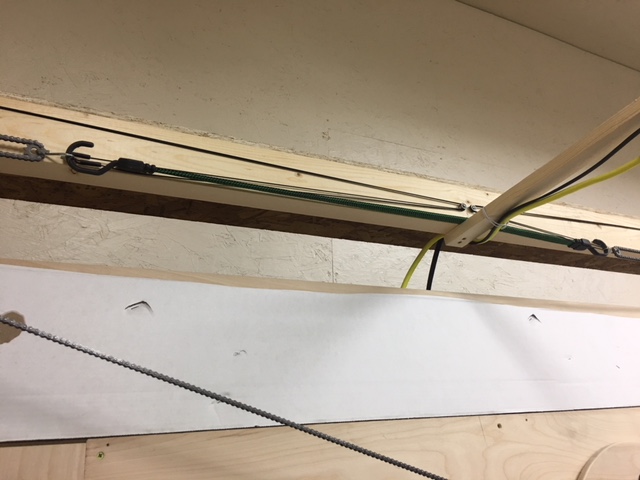 Big improvement. Also tinkered with the nail that holds the loose end of the chain, as it was in the way sometimes. Ended up adding a 6" block to the top of the beam, and moved the nail higher. All is well with slack chain now. Sorry, no photo of this.

I did that as well 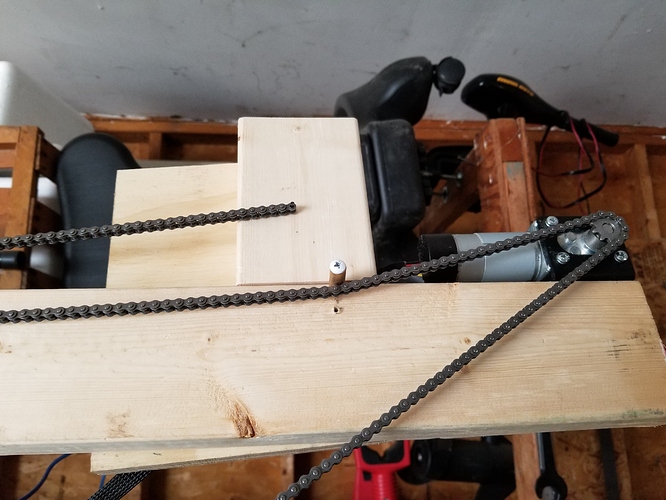 I took your advice to use a bungee to Keep the tension of the chain and it works gréât! I have also inverted the position of the nail and the loose chain so They are never in the way of the bungee and the sprockets when the sled is moving on the Workarea.
So far the test cuts and the sled managed to be perfectly cut 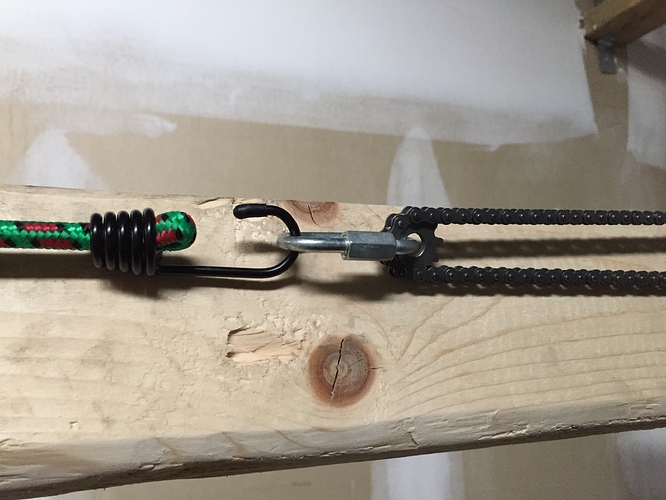 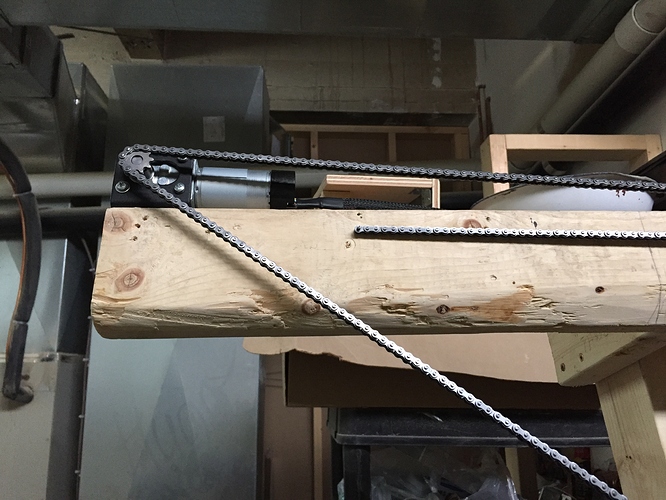 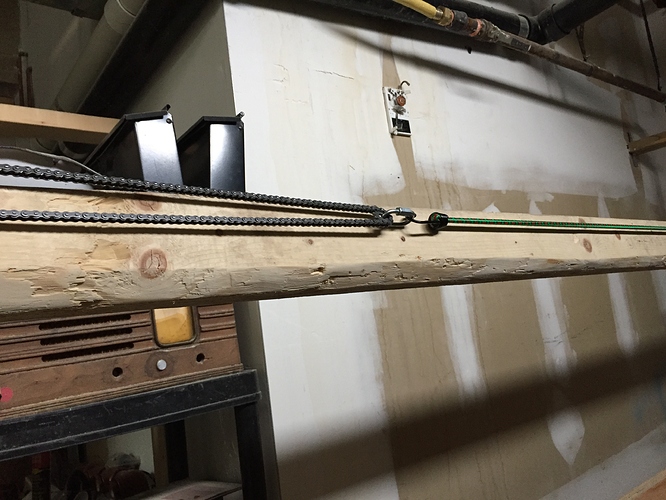 Im still in the settup of the machine, due to special surconstence but, correct me if it doesnt make sence, I would double the sprocket on motor shaft, one for the sled and the other for a another set of sprocket, and that set of sprocket would be on the same shaft into a bracket… the thing is I would put one sprocket like a fly wheel, when the motor goes down fly wheel let go the chain when motor goes up fly wheel grabs engaging tention to the other sprocket on the same shaft…pardon me my english a total of 4 sprocket, a custom made bracket with a fly wheel sprocket and two extra chains.(dont have to be super long chains.)I think it would be a more consistant upgrade.

I think I need a picture to get what you’re saying.

what would the purpose of the flywheel and the other chains be? 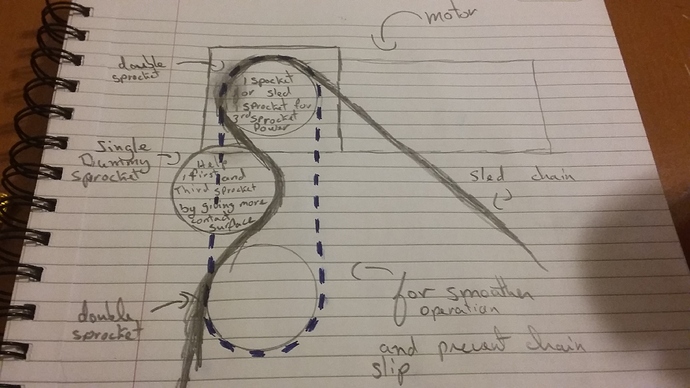 I don’t understand the value that this provides?

we want the chain to start and stop quickly so we can move accurately, the speed of the chain is variable (256 levels of power in each direction)

I found that a 36" flat bungee from Walmart has solved the problem for me. The flat bungee seems to have a little more stretch when its being maxed out, and it appears to return to original length with out any problems. 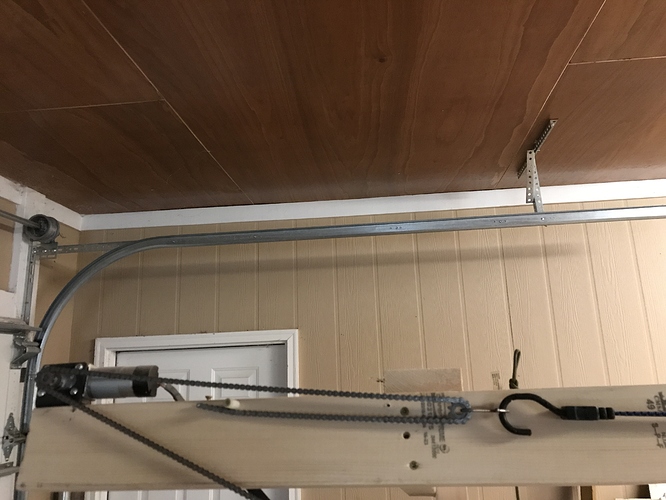 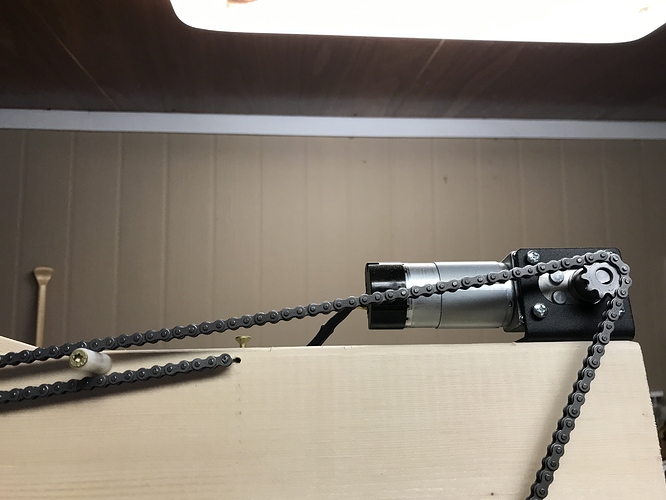 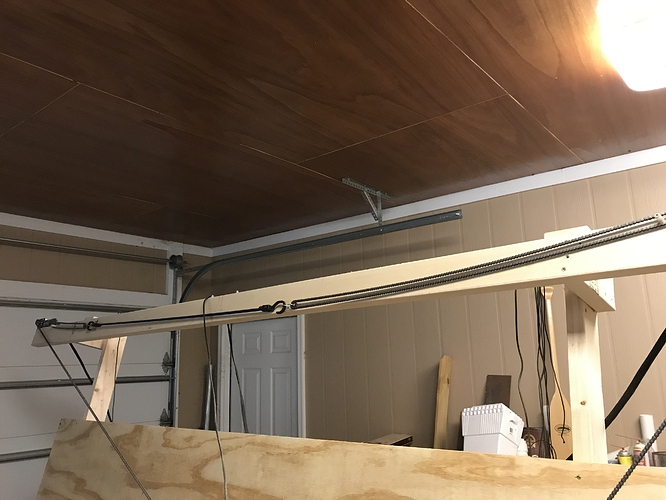 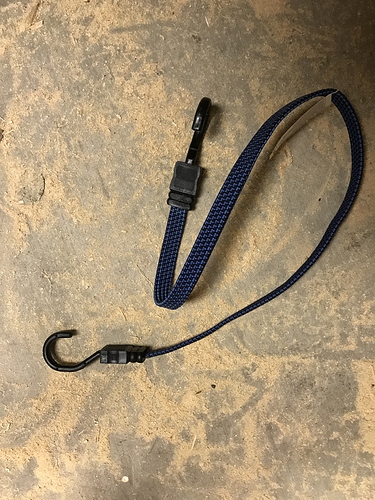 @Elmanifesto, I see now, thanks for the picture. That sort of arrangement could certainly increase the engagement and potentially reduce chain slip. Just based on intuition, I think you would need to carefully design such a system so that the secondary chain is taut. Otherwise, the backlash in that arrangement might make the lower sprockets lag the upper ones, which could make chain slip worse!

Thanks for your idea, and welcome to the forums! 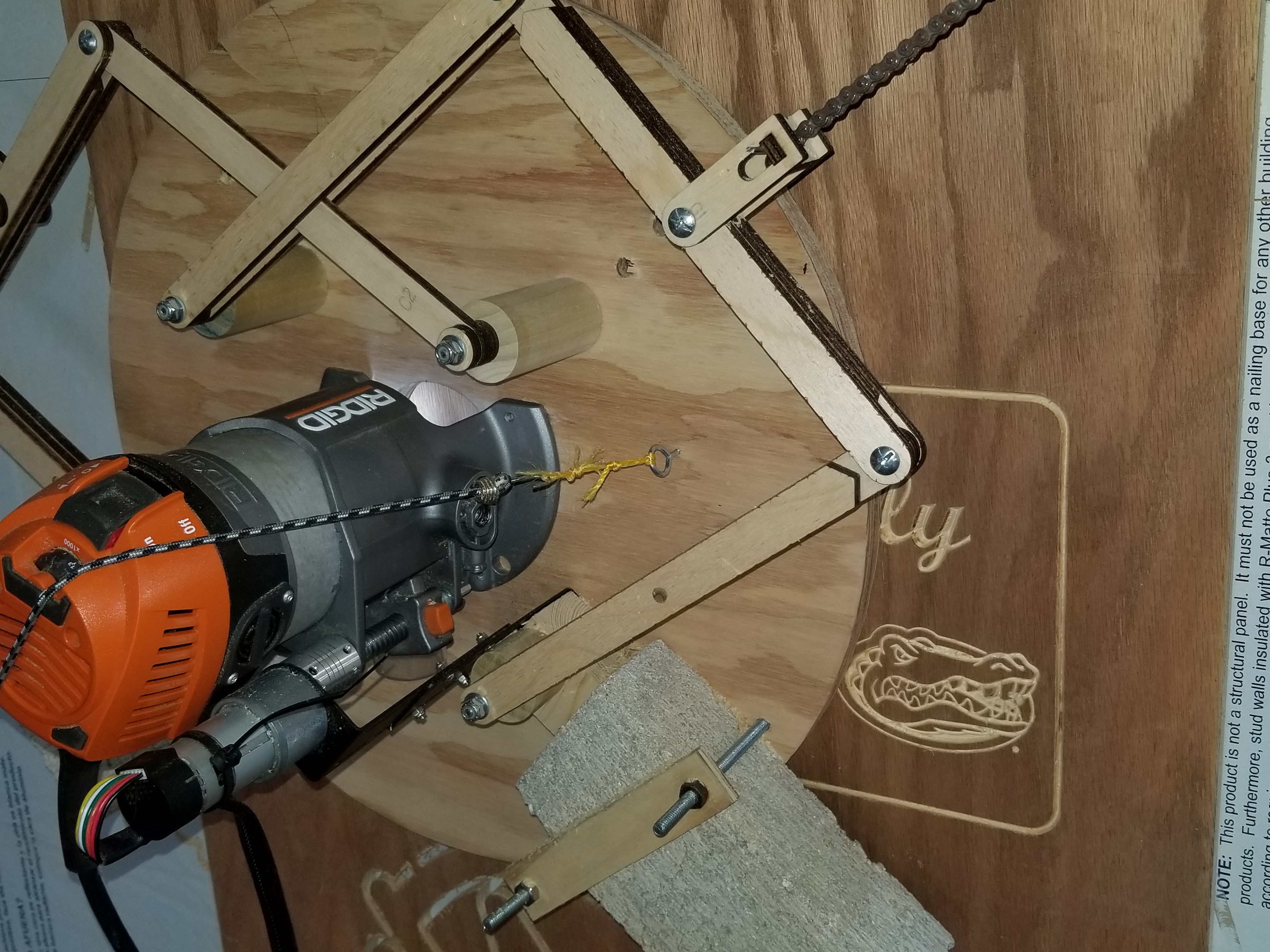 Thanks. Z axis is a no go without the bungee.