Has anyone used a 70:1 ratio motor? My original z motor encoder quit working so I ordered one that is faster but haven’t seen were anyone has attempted to install this one. If so some guidance would be awesome

I think we will need more information about the motor to be helpful, do you have a link to where you bought it? Do you know what kind of encoder it has?

Bar ,
Thanks for the quick reply. You are on top of things apparently. I have it hooked up but all its doing in the motor test is vibrating for a sec .
I have attached a screenshot of the motor I have, sorry I can’t get a link at the moment but I will send you one after work if need be 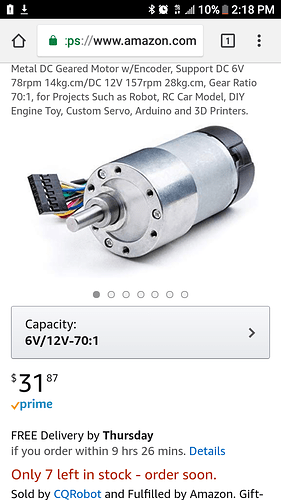 This sounds to me like there is something more wrong than just the settings. I would start by not worrying about the encoder and just try to hook up the power wires. If you get those right the motor will spin during the test but say “fail” because the encoder won’t be hooked up.

On the original motor cable the power wires are the red and the black ones. I can’t tell which two wires those go to on the motor, but when you get it right the motor will spin

Ok . I will try that this evening. I will let you know the results thank you so much for your help.

Bar,
The motor has the same red and black power wires. When they are hooked up only , still no motion . This is very similar to what it was doing with my original motor , it would make noise only I figured the encoder went bad so I ordered another I originally ordered in June . Is it possible my motor controller is bad?If so do you have any idea when the advanced controller will be available.
Thanks

Is it possible my motor controller is bad?

Yes, that is possible. If it’s bad I can send you a new one right away. Will you try plugging a different motor (one of the left or right motors) into the z-axis port and see if the z-axis passes the test then?

Ok ,
I unplugged all the motors then plugged the right motor in the z port and it passed on z.

If you could try using the cable from the z motor on the right motor that would differentiate between a bad zone motor and a bad cable.