I have idea to solve the elusive joinery problem. End grain cutting! We could cut out a slot in the frame and build a clamping table that comes out the back. Mark a line in the slot that would be an indexing point. Then you pass the boards through and line up with the indexing line and clamp to the clamping frame on the back side. This would hold the board in place. Then you load in the cutting sequence. The type of journey would be endless. The idea came from Matthias’ pantorouter that I made. See image here: 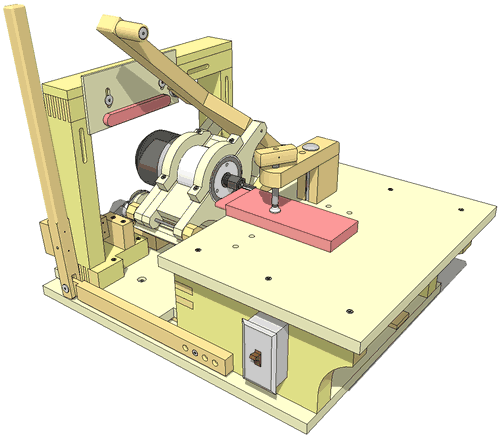 We would merely modify his board clamping setup, and the pantorouter would be replaced with the cnc router. The great thing is that we have a vertical cnc. We could cut any length board on end grain unlike horizontal cnc.

Complications to solve: Where to place slot, how to build clamping frame, how to line up cnc accurately every time.
**Note that this assumes you have the plywood backed frame.

Interesting idea. Most will have some sort of plywood.

actually, with the new frame design (if you build it with the optional verticals), it would be pretty easy to add a horizontal board in the center to clamp things to. Then you just need something for the router to ride on with a hole in it, and this could be cheap foam board.

It shouldnt be that hard of a job. The only hard part would be lining up the cut. I thought that if you mark the boards center and then draw a thin line on the cnc to line the two up. Then ensure that the board is perpendicular with a square. Ground control could have a setup for zero that would indicate the line on the frame.

Why not just CNC a template for the pantarouter to follow? Then you would have the best of both worlds…the ease of setup and quick cut time of the pantarouter and the ability to design your joinery digitally of CNC!

I could do that and probably will. But I was trying to come up with a solution for everyone that doesn’t have a pantorouter.

@bar, hold on tight. Things are going to get crazy!

I think its within my realm of capabilities, but I’ve never done anything with OpenCV, python, kivy, augmented reality, etc. before. So I’m feeling my way through.

Ooooh I want to build one of those pantorouters sooo bad… It’s going to have to wait. I’m building his 12" jointer first.