McAfee flags GroundControl.exe as a trojan

Generally there is no way to prevent virus engines from identifying something as a trojan. This identification is often made on the basis of heuristics that the AV manufacturer regards as proprietary. Checking virustotal,com
(https://www.virustotal.com/#/file/d0a73bf3194ba615f8e94723eb9dfeaab4fcf7fd8fdbb5aa0b7625999c5ec860/detection), GC is detected as a possible problem by 6 of 65 virus engines. Of the six, none of them agree on what the problem is. This will make it really hard to keep AV engines from generating false positives.

Normally there is a way to report false positives. You might try reporting it as a false positive. But, since this changes somewhat frequently, it will probably have to be re-reported on each release.

You opened an issue Macafee sequestering GCode files #748 in the GroundControl repository about a problem with the log file. Is this the same issue, or a different one?

This happened to me today 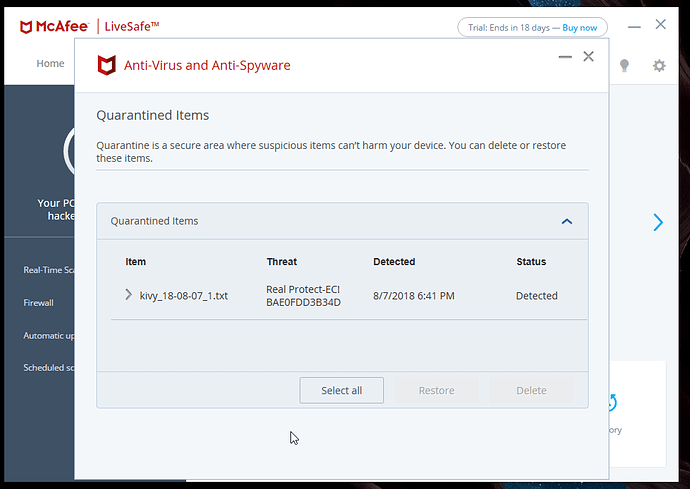 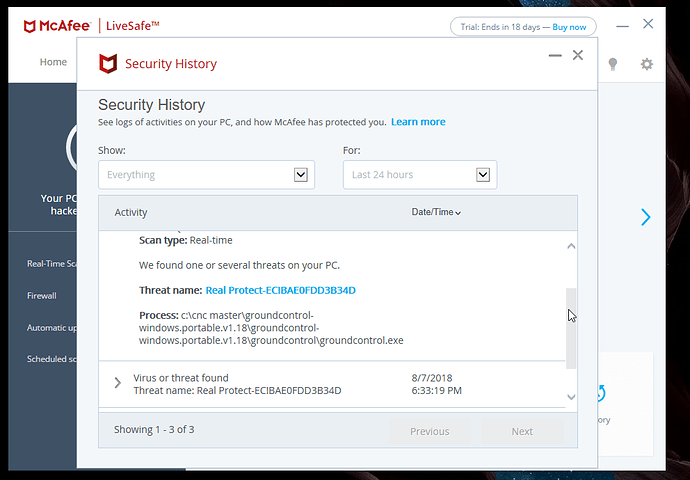 Does GCv1.17 trigger the alarm as well? Do earlier versions?

you should submit it to mcafee as a false positive. see here: https://service.mcafee.com/webcenter/portal/cp/home/articleview?articleId=TS102053

How to stop McAfee from Quarauntining something it THINKS is a virus/infected?

The file is RPG Maker MV ( Which I just bought for $80, I had been using the trial version no problem and tons of other people use the program. It is not a virus and if I can't figure this out then I'M out $80.)  It keeps being quarantined and every...

Update: White listing GC did not help. I ended up running GC on a dedicated laptop w/o antivirus, disconnected from the Internet.