So my kids are into Minecraft and before I tore the temp frame apart to build the final frame, I’d thought I’d try making something they’d like. Below is a Minecraft pickaxe. I used makercam’s follow feature to carve out the pattern on it (kinda hard to see in the photo). For some reason, the depth of the cuts where inconsistent. I’ll have to review the gcode to see if it’s a code problem or possibly a Maslow problem. 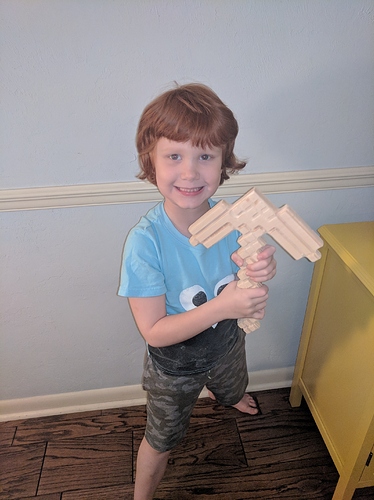 Not sure if you have put a bungee over the router connected to the handles/bolts yet, but if you havnt, you may want to give it a try. This was the solution that helped me with z axis inconsistency. Just do a “bungee” search in the forum and you will find.

I wondered what that rubber band was for in one of the pictures I saw… Now it makes sense. Thanks for the tip! His twin brother wants me to make a Minecraft sword for him so I’ll try that out tomorrow. If that solves the problem I’ll post the svgs to GitHub.

His brother didn’t want his picture taken so here’s Malone again holding the pickaxe and the sword. They are identical twins, so see one, seen the other. I made the sword too small so the diamond pattern came out too small. I still had issues with the z axis, but I think I might have gotten it worked out. I’m going to make another set with some tweaks and if they come out well, then I’ll post them. 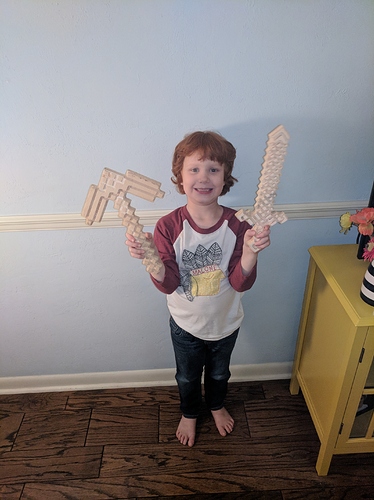 Those look great! Thanks for sharing. I see 1, no… 2 happy kids and jealous kids in the neighbourhood.

Made an axe and a second sword. The twins promptly wanted to paint them. I tried to explain the concept of painting the diamonds a different color so they stand out, but you’ve got to pick which battles to fight. 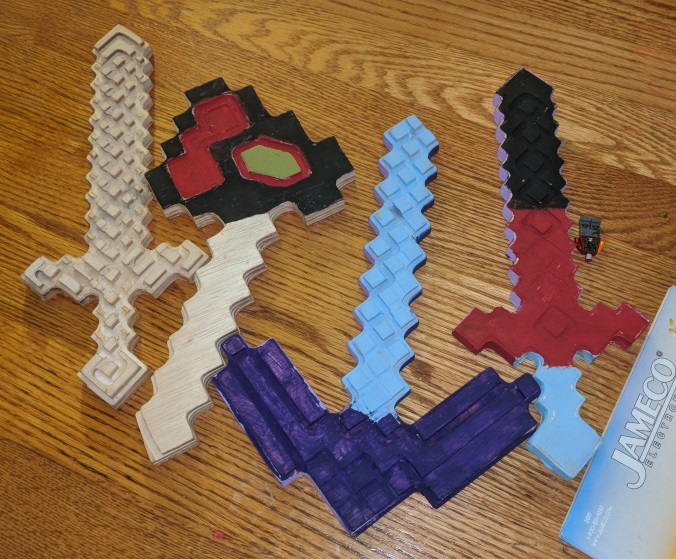 I like that the Freedom of Creativity won this battle