Recently one of the motor gear have failed 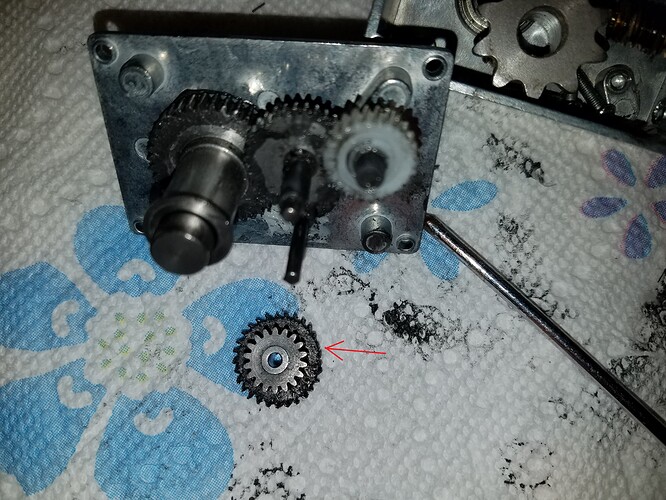 We have seen gears fail before, but only after much longer run times. I’ve worn one out which looked similar to the picture, and someone in the community had a gear which came with a broken tooth from the factory.

I don’t know of a way to buy just the gear which needs to be replaced, but I will contact the manufacturer.

Thanks bar. If they are available for purchase, I will probably grab a few set for back up.

What did you end up figuring out? My teeth were ground down in 2 months weekend use.

Bar sent me some replacement. I also purchased another set of gear box. I have been using the new gear box for probably 100 hours now. still running strong.

Do you remember if it was your left or right motor?

Do you remember if it was your left or right motor?

I’ve had a similar problem with my left motor. I’ve used it for approximately 100 hours before left motor could only turn one side. Do we have any news from the manufacturer? I’ve already ordered 2 other motor from the maslow website.
I see you @Johnny5 have bought a another set of gear where did you find those?
Is the behaviour of your motor similar to mine (working only in one way and not well) or is it a complete motor failure in both ways?

Hi guys, After using Maslow for over a month pretty much everyday, yesterday my left motor made a click sound (more like a “tack-tack-tack” type of sound) each time turning left side . As @Gero said it is important to know that I had two chain wraps in that time but on the right motor. First reflex stop everything So i’ve checked several times the motors with the groundcontrol test everythinf seems fine and then 2 things happened. first batch of tries everything went fine on the groundcont…

What is expected longevity of X and Y motors and gearboxes/chains? Hardware

I’ve experienced one motor failure so far in two years so they do fail, but it seems like hundreds of hours of runtime is reasonable to expect. The failure mode seems to always be the same gear in the gearbox and I’ve contacted the manufacturer about using different metallurgy for that gear and they say they are working on it. They sent me a bag of the gear which wears out so if anyone wants one I’ve got some