Here is what I came up with for the chain tension on my as yet uncompleted Maslow, inspired by my Concept 2 rowing machine. The chain is looped back again to shorten the overall space that it takes up. It has a five pound weight for this end. I temporarily attached a laptop to it, and advanced and retracted the chains, but had to slide Maslow out of the way to work on the tractor. Probably a good idea to put a chain guide on as well. There are three chains on this connected end to end with tie wraps, no sled here in this earlier pic, but you can see below the motor where the tie wrap is to get an idea of how much chain is taken up. 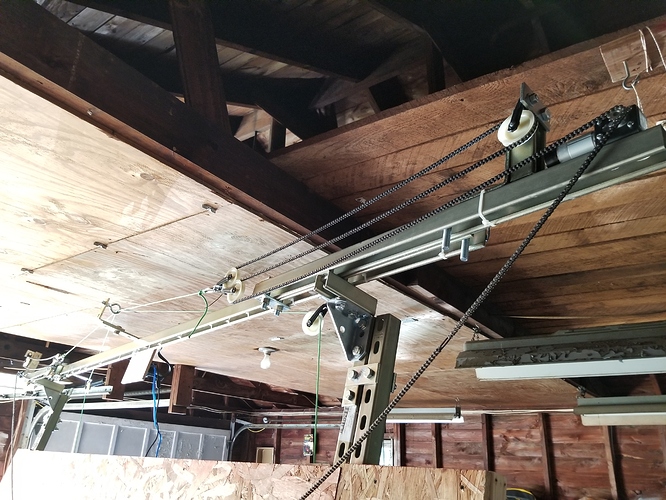 How has this frame been working out for you? I am building a metal frame now and this looks a lot like what I was planing as far as extending the top out the extra ft on each side

Haven’t actually cut anything yet, I’ve been having it run through the holey calibration cut pattern a number of times, watching for movement errors. I had a skip on the left side, as my tension mechanism pulls the assembly outwards at the middle to clear the strut (so it wouldn’t snag on anything as it moved). Added a pulley to act as a chain guide to hold the slack chain parallel to the front of the strut.

Only thing left is a sticking link, have to sand down the inner ring, and secure the backboard at the bottom. Interesting watching it move and what interacts with what. Think I got caught up more in how the machine moves than cutting anything yet. Right motor makes a high pitched noise, but I read that’s common.

My beam is set about 20mm forwards of the backboard, it is pretty easy to adjust, just evened them up yesterday. Figured I would calibrate on the backboard, then once I get waste board and material calibrate again.

I work this week, then furloughed for two, so should have time to calibrate, and try cutting out a test piece. 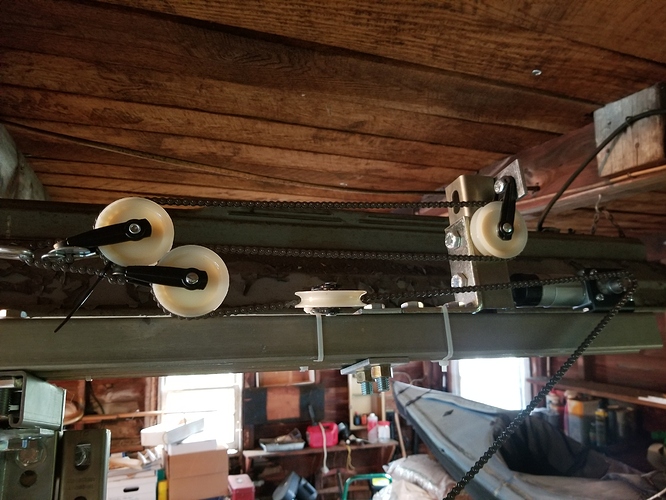 Having built this, any generic advice on the use of unistrut for the frame? Would be interested in the details.

This design is from here, dimensions are determined by counting holes.

Here is the frame I’ve designed for the Maslow. I’ll need to fine tune it when my kit arrives, but this is what I have at this point. I know, I know, the first thing that comes to mind is “this is totally overbuilt”. However motor to substrate rigidity is essential to the Maslow design. Even a millimeter of flex in the frame contributes to less accuracy in the cut. There are several issues I’ve tried to address with the construction: Rigid construction to reduce flex in motor supports under lo…

Only thing to be aware of is that there are two types of two hole plates. The ones that keep strut side by side (actual Unistrut part) like at the top where the beam is doubled, and the one that is wider to allow a bar to mount across (Home Depot kind) like where the vertical struts are doubled, notice the gap, to allow proper mounting of the horizontal struts.

Strut was obtained from home depot, price break when you buy qty of 10. Nuts, bolts, expensive, perhaps buy in bulk? Actual Unistrut parts expensive online, I used aftermarket strut hinges, but they were so sloppy the pins were starting to slide through, I had to drive out the pins and replace them with clevis pins. Afterwards I found an electrical supply store in Brooklyn (I believe) with a web page, prices were reasonable. Think I got the side by side two tab plates from them, and a hinge or two for comparison.

Edit: I originally used medium duty stem casters (think that is what the original designer used) from harbor freight, but could never get them tight enough, this design is heavy, and the wheels were wobbly. The second person in that thread used “U” bolts over the strut to use four hole heavy duty casters. I purchased heavy duty casters and filed out two of the holes and rotated the plate to use 3/8 strut bolts and a channel nut. Much better.

this is not a good thing and will result in accuracy errors, you should chase it
down.

My beam is set about 20mm forwards of the backboard, it is pretty easy to
adjust, just evened them up yesterday. Figured I would calibrate on the
backboard, then once I get waste board and material calibrate again.

you should not need to calibrate again.

This is the start of my strut frame build, I am working it out in my driveway while I debt how to complete this project. I am trying to get to a 12’ beam as seen in the photo with the sandwiched middle strut, I angled the bar which pushes the struts together and eliminates any gaps.

Caster will be a must for portability, but I am debating a wall mounted version that can collapse mostly flat.

Today however I am struggling g with 3D printing issues for the meticulous z axis upgrade. Sigh back to it. 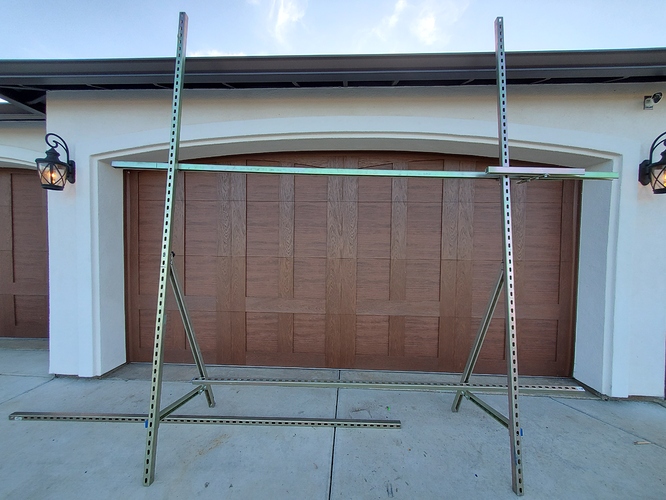 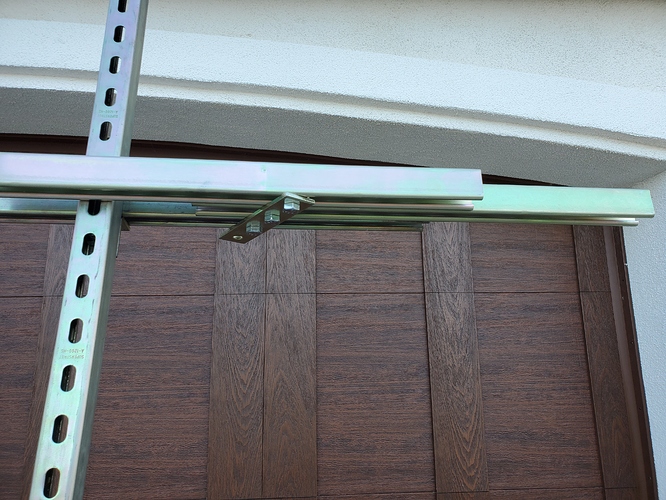 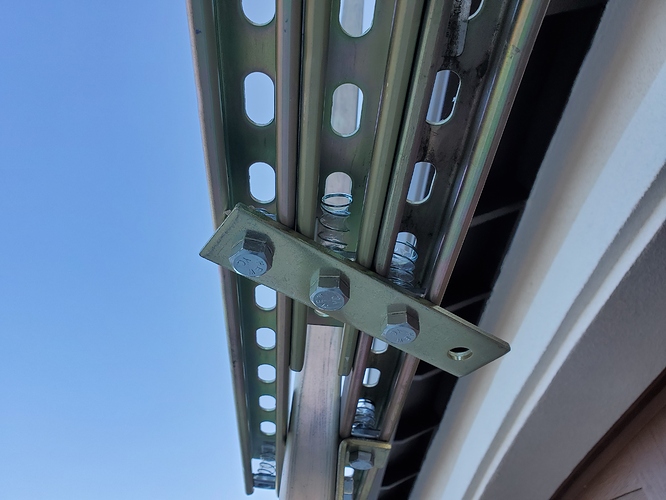 Thanks for this! I’m planning to start a Maslow build once my job scales back a bit during the summer months. Been picking up some very helpful ideas from various people on the forum.

One thought I’ve had is to use unistrut for the basic structural parts of the frame, add casters to move around my garage/workshop, and a 12 foot LVL beam for the top. Probably overbuild, like just about every other project I do.

One thing I wished I did was to extend the bottom, so a counter weight could be used like this:

Edit: you wouldn’t have to extend it down so far if you looped the chain back up as in my setup by adding two more pulleys, and bumping up the weight a hair.

I just tried using my laptop with webcontrol rather than rpi, same thing, then downloading the standard firmware with laptop same. Always runs a bit past vertical, by about 6.5 or so degrees.
Just noticed the controller messages at the bottom, it seems to know it is overextending for some reason?