Hi all! I recently bought & built my first Maslow machine hoping to build some custom furniture to sell asap. I’m not new to woodworking, but since I’m pretty short on cash now I didn’t have money to put into a Ridgid router. Also since I’m into 3D printing I’m aware of better ways to turn rotational motion into linear motion than the way it’s been done with the Ridgid routers.

I was waiting to buy a linear sled kit from a company in China, but had a chance encounter with this little object at my local Harbor Freight & decided to make a go at it. 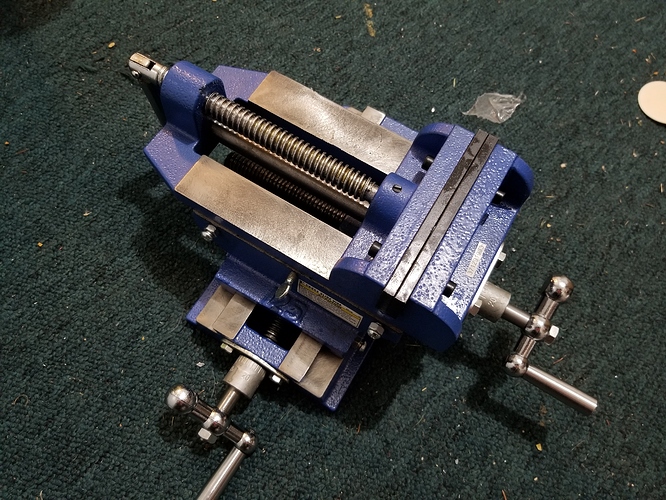 I’ve spent a few hours disassembling, and cutting things up to use only the top and middle sections to create the linear motion I need. I’ll be strapping a Porter Cable router I already had to it.

A few issues I can think of with this thing which will make it a little challenging.

Friction. I plan to sand everything as smooth as possible and get it tuned as much as possible to keep things less wobbly but still not so tight it can’t be moved. I have been able to get the motor mounted already and have it moving the sled but without any tightening yet.

Weight. I haven’t dropped this in a scale yet, but I estimate it’s about 5 pounds of steel. I know this will change the center of gravity a lot & I’ll have to move the ring out quite a bit to compensate for this. I also expect it will change chain sag & basically force me to re-calibrate completely.

Any thoughts on this? I wouldn’t be surprised to hear others have tried things like this. I really seriously contemplated taking some linear bearings off one of my 3D printers but that thing cost me about $3,000. They and a piece of aluminum would be a lot lighter, but this is what I’m working with for now.

it should work, you can probably reduce the brick weight a bit by having this on
there. the calibration process will handle the chain sag issue (as much as it
can be handled

let us know how it goes.

cbeam is what many people use. It’s pretty cheap. Actually cheaper to buy it one at a time then in bulk since 25% tarriffs kicked in on any thing over $700 in value.

Those cbeam sliders look awesome! I had found a few other options, but they were more expensive.

I also have this one in my cart https://www.aliexpress.com/item/32912381231.html?spm=a2g0o.cart.0.0.53b33c00ZJV3Sx
It’s half the price, but still not as low as what you linked! But those Cbeam sliders are using aluminum extrusions, like my first 3D printer. From experience I know the wheels tend to eventually create problems.

I think long term I’ll go with one of the more expensive ones so I can have good bearings to ride on.

For now though I’ll forge ahead with the cross slide hack. Hopefully I can get it going today or tomorrow.

It’s been a while but I figured I should let the community know how this one turned out.

I took the this thing apart, and had to do some cutting & grinding to get the router to lay nicely on it but it worked out ok. I was able to get the motor mounts for the Z Axis mounted at the top of the screw & with a little grinding on the screw head it even fit in the coupler!

It took me a while to calibrate the Z depth, but after a dozen attempts I got it pretty close!

The only problem I’ve had is the slide tightness screws moving on me. Some locktite would fix that. I just didn’t do it when I put the thing together in case I needed to adjust the screws, but now I have a good feel for how tight they should be after having to adjust them a few times.

Oh, I also reduced the counterbalance to one brick centered at the bottom. Two bricks were just too much weight with the steel of the cross slide.

Overall I kinda did a hack job & it’s not pretty but I got the thing to work. 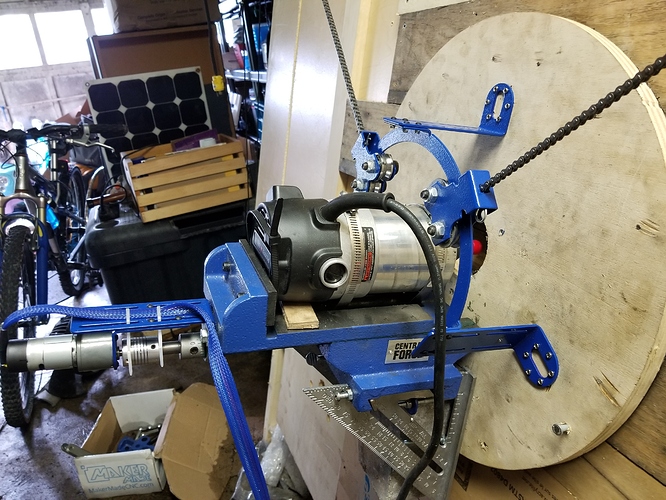