Sled with ring system and z-axis

Hello,
I made my sled with a ring system and a z-axis adjustment independent of the router used. Currently it holds a Dewalt but I think I’m Moving to a Kress 1050. The Kress can go as slow as 5000rpm which is suits the slow feed rates of the Maslow. 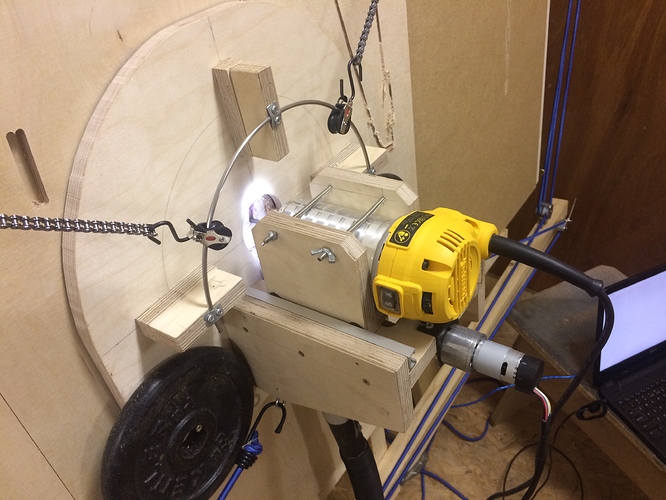 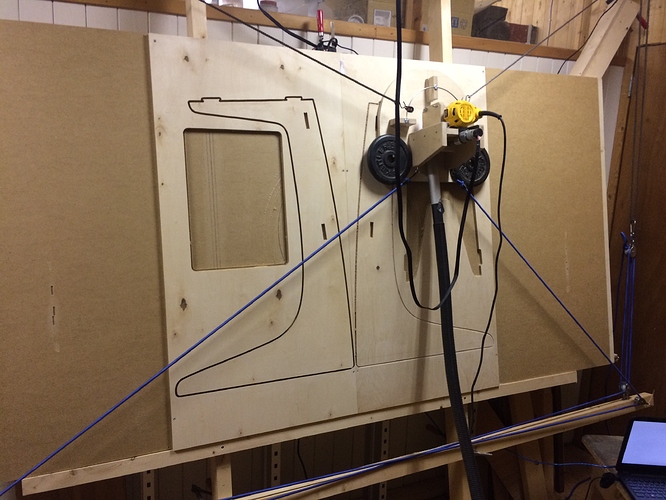 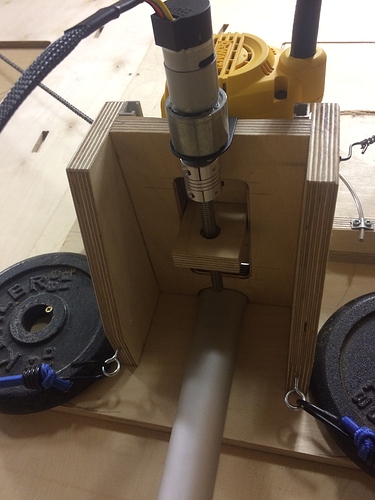 Yeah, that is fantastic!

Would it be OK if we wrote about your setup in the newsletter next week?

What is it that you are cutting parts for there?

Of course!
I’m cutting my first project,a stand for my iPad and phone for indoor cycling on zwift. I’ll post it when it’s finished in the project section

Haha, yes, it has to sit at handlebar hight.
And has to hold my phone and other stuff I need during training.

I love the pulley system, I sketched that type of thing out in early testing of Maslow but never did it. Very nice work. Love the z axis simplicity!!!

I like the counter-force bungee system. I’ve been wanting to test a similar setup (starting small scale) but since you have one made… how does it work for you? Do you find that the tension in the lower corners is helped enough (and not counter acted too much by the other bungee)?

I need some more time to calibrate and fine tune the whole set up but will report once I get it right.

I am curious as to how you formed your rod into a semicircle? I am looking to go this route but can’t come up with a good solution as to how to bend the rod in a accurate circle.

It was actually a ring to start with, I just used part of it.

Looks good. More simplistic than my Z-axis design. What size threaded rod did you use?

Thanks, 8mm with 2mm per rotation pitch

Ok, I used a 1/4 inch 20tpi. I am finding it is too slow of a rotation. (sled will start moving to a new start point while still retracting) Next iteration will go with something similar.

If the sled is moving before the retration finishes, that’s a software bug, not
a problem of the Z axis being too slow.

what firmware/GC version are you running? I thought we fixed that a month or two
ago.

It’s unlikely to be significantly better.

We still need to do a shoot-out between the three kits, but they are all going
to be very close. Close enough that prior to this week’s improvements in
calibration and chain sag, the errors would have been many times any possible
difference in the kits.

It still may be that errors of 1/2 mm in your calibration measurements are going
to be larger than the difference between the three kits. I actually expect this
to be the case.

I will have to check. But that was an issue I had 3-4 months ago. I have had too much going on with other projects that I have not had time to work with Maslow. I also think I had miscalculated my z axis feed as well. When maslow said I was at .78" my measured bit depth was over .95" deep.

Once it gets a little warmer, and I get a couple of builds done and out of my way… I will get back to Maslow and update everything and recheck my z axis feed rate.

Count me in as another person who is interested to see and hear about how the counter-force system works. I have designed a more complicated system for accomplishing the same thing, but I haven’t had the time to implement it. I would love to see any video you have of it working.

The more I look at this the more excited I am. This reminds me a lot of when @pillageTHENburn came up with the arm mounting design.

I have had a few instances where the router climbs in the direction of rotation out near the edges because most of the weight is being carried by the closer motor.

Based on the photos, I think you may have already done this, but this design could be done such that the counter-force increases as more chain is let out and decreases as chain is retracted. This would effectively change the angle of the gravity vector out near the edges because the force opposite the long chain would be very high and the force opposite the short chain would be low.

I am very excited about this. Nicely done.