Not keeping up - Motor 1 sometimes fails

First test project, the Maslow logo “M”. Sled kept showing error not keeping up. Tried some of the troubleshooting steps in other recent thread. Motor test Left Motor, Direction 1 sometimes fails, especially when not in home position. Have the most current firmware and software. I was running the g-code from the Maslow file, I also tried using MakerCam to compile the SVG and same failure. The picture below shows what happens if I set the error threshold to 60 instead of 2. Tried 20 and 40, both would stop the project. I wanted it to proceed far enough to have an image of what its doing.

Do I have a bad motor? This is the first project aside from the sled, so, I am hoping that is not it. Also, I am in the middle of cutting out pieces for a set design I am working on, so, I need it to work asap. How fast can parts be shipped?

I also tried another 12v 5a PSU I had laying around to test if I had a weak PSU, same result.

Any help is appreciated. 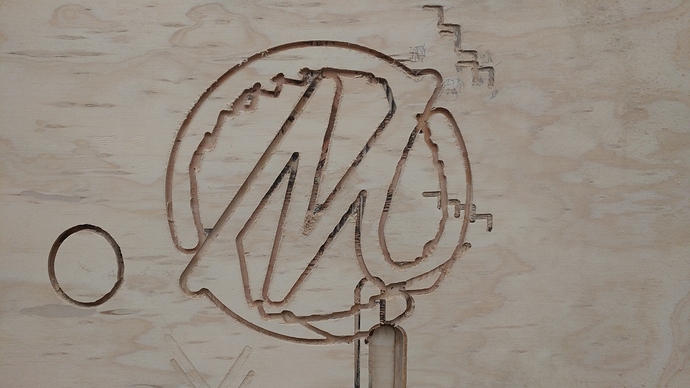 Check to make sure the cables are really secure in their connections and try to route the cables away from or perpendicular to other cables, such as power lines. You can also troubleshoot by swapping which cable connects to which motor and/or port to see if it follows a particular port, cable or motor.

If you are cutting near the middle, I wouldn’t adjust the error threshold. I might consider it if you are cutting in the top center where the forces are the highest and you just need to tweak it a little to get through what you are cutting. Focus on getting the motors to pass the motor test.

Update… Tried swapping cables, the left motor still fails testing occasionally. The motor was loose in the connection to the reduction gear, I disassembled and tightened the motor thinking maybe there was enough play to disengage from the gear.

With the failure being so repeatable, is it really the motor? It performs the left outside arc of the logo fine but cannot do the inside arc? 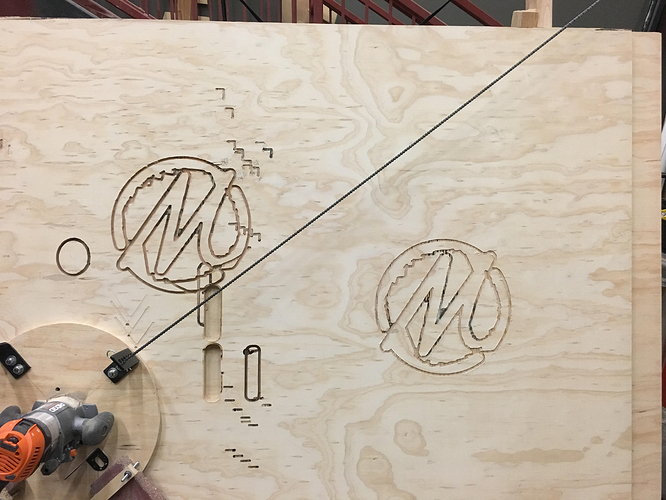 Has there been any incident of a ‘chain wrap’ that could have compromised the motor driver board?

I ended up flashing the board and going back to v1.23. Recalibrated and it did fine. I did have several more “sled not keeping up” issues, I had a thought about the shop exaust fan and shop vac. I moved the shop vac to another circuit and the issue was fixed.

So, My issue is fixed. I cut our 7 large pieces for a Nativity set I am building and it worked well. I am having accuracy issues in the corners, but, from what I read, that is somewhat normal on the quadrilateral setup. I am hoping to add a ring kit when they become available.

Also finding the movement to be very jerky in 1.24, recalibrated but didn’t help.

1.24 had a bug in it that could have been the culprit. 1.25 should fix the issue so I would recommend updating if you haven’t