So I cut the handles off this router, for a better fit in the sled, as some suggested. However, there are only two RED wires going from the switch in the handle to the router. i.e., I now have a router with two red mains wires, and it’s hard to tell which was connected to which on the handle switch.

This confuses me. How do I wire this to the mains? From my (limited) understanding of electrical circuits, they simply CAN’T both be positive wires, right, even with fancy modern double insulation etc. – right?

So I think MAYBE the positive and negative don’t matter, because it’s just a motor, so they color-coded them the same? IS one negative and one positive, or can I wire it either way?

Does anyone know what kind of switch it is, that has a positive and negative going in, and two red wires going out (I would have expected just a red wire going through the switch – maybe this is the double insulation/grounded switch)?

There is no positive or negative

only phase and neutral, and they are not very important in single phase electrical circuits.

If i remember correctly the 2 wires of the power cord were connected to the switch? If so, just cut of the switch and put a cable connector in it’s place. Just connect each of the wires going to the motor with one of the power cord cables. I use one of these to switch my router on and of. 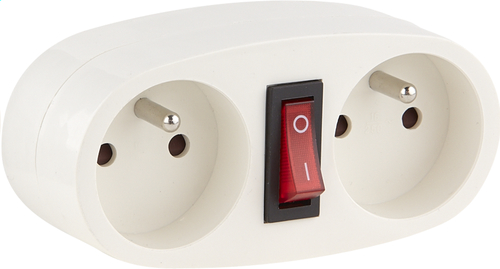 If the motor would run in the other direction if you switched them up, they would also do that if you put your plug upside down, there is no danger of that happening.

It’s probly just a single phase switch with a bridge for the other wire, so it’s easy to replace the power cord if needed.

Edit: Maybe take a picture of the switch?

you want to twist the wires together

Please don’t don’t that, use a decent cable connector, there is too much movement in the router to just twist and tape them together.
Or twist and solder them, just be sure to shrink wrap them afterwards.

You’re right, the splice should be properly mechanically connected and insulated, I should have mentioned that.