One of the problems with the Maslow is the availability of parts and kits outside the US, if key things can be 3d printed and adjusted via a parametric CAD design to accommodate various hard parts (router diameters, linkage standoff heights, etc) then the resulting designs can be put on thingiverse, etc and people outside the US can order them locally.

This youtube channel is doing very interesting things with 3d printed parts. Here is a video on making a router lift, which could be pretty trivially adapted to a maslow sled 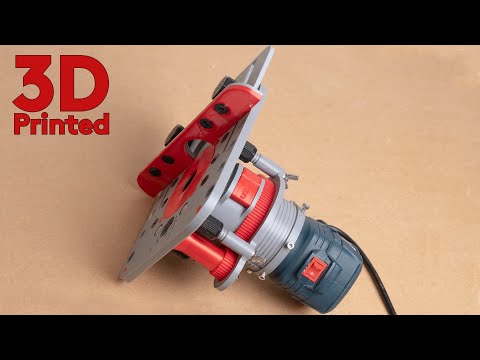 a few techniques that he is using that are interesting are the assembly from multiple parts, and the reinforcement of parts with internal bolts threaded in to the parts.

Along similar lines, it may be possible to use a 3d printed cyclodial gearbox on a common bldc or dc motor (with encoder) for the main motors. This approach provides very low wear, compact size, and high gear ratios (if you are doing a compound cyclodial gear, it’s hard to get a ratio under ~30:1 and one of the videos is of a ~900:1 gearbox)

I specifically want to call out the latest one that I added (as of the date of posting). This is an interesting variation in that the ‘output’ of the gearbox is fixed (which allows the bolts for the ‘output’ gears to be in double sheer, eliminating a significant source or flex), and the housing around the gears is what moves. With this sort of approach, you could 3d print groves in the outside of the housing and use a lighter weight steel line instead of the chain (trading off ease of finding, no slack side to manage and possibly additional stretch vs weight and sag)

Some of these gearboxes are designed specifically to be able to be backdriven, but that depends on the gear ratio involved. I’ve seen comments of them being backdrivable at 10:1 gear ratios, but with significantly higher gear ratios they do not backdrive.

It should also be fairly easy to design an encoder into the 3d printed part (being aware that many plastics do not block IR, so either a card sensor, magnetic sensors, or painting the plastic may be needed). For reference, the current maslow has ~8k steps per rotation for a 2.4" circumference gear, or a little over 3k steps inch. This could probably be cut down to 1-2k steps per inch without a noticeable impact to the machine accuracy. Adding a ‘index’ pulse would make setting it to a “12 o’clock” position completely automatic (if you use a chain that can be reset)

Unfortunately I don’t have my 3d printer up and running yet, so I can’t do much experimentation, but I wanted to post these links to give others some things to think about. (prompted by @bar commenting that he was working on a new version)

I think we’ve been watching a lot of the same YouTube videos and thinking the same things. I’m actually using that same magnetic encoder as in the video and designing for injection molded parts which will of course be open source and so they could be 3d printed also.

It’s turning out to be quite the challenge to make something reliable and also not excessively complex, but you and I are thinking exactly the same things

continuing to think about this a bit more and working through the requirements and implications. I really want someone to check my math.

tl;dr version, I think a 5-7" diameter spool driven by a common nema 17 stepper will work well and add the ability to have the machine detect where it is rather than doing a ‘reset chains’ type of thing. I’m working on putting together a CAD for this that uses common skate bearings (available <$1 each at any skate shop, cheaper online) and BBs.

We need to have bearings between the base and the outer ring. If we use BBs for the bearings and mold them into the ring, we can make this into a recirculating screw, so the outer ring moves in and out as it turns. For standard 0.177" (4.5mm) BBs, this would allow us to have a screw pitch of 5 turns per inch (~5mm/turn)

This has two benefits:
First, it means that the angle of the line compared to the workpiece can remain essentially constant.
Second, we can measure how far the outer ring has moved (either by a sensor per turn, or by a 3 bit grey code encoder) to get a fairly good idea of where the sled is. this can then be used to create a safe routine [1] to let the machine figure out where it is after an emergency stop or other hiccup.

In crafting the cycloidal gear for this, we can use 3mm pins spaced ~4mm on center, giving us ~6 teeth per inch of circumference. This gives us Pi * d * 6 teeth on the gear (noting that the diameter of the gear is going to be a little smaller than the diameter of the outside of the ring, but this gets us rough calculations)

As for the power of the motor. With the stock maslow, we get 66 pounds of tension per motor, so aiming to get the same tension. stepper motors are commonly rated in oz-in so a motor needs to have ((66 * 16 * (d/2)) / gear teeth oz-in of torque.
Since there are ~6 teeth per inch of circumference (pi * d) [2] this results in:

Grbl can get 30k steps/sec (which would be ~4k rpm with full steps driving two motors) but steppers lose power quickly as they go faster, after ~500-1000 rpm power has dropped off to the point that cheap motors won’t give the ~30 oz in of torque needed. but even 500 rpm would be 100 inches/min compared to the motor limit of ~48 ipm for the stock maslow motors.

since the gear ratio is scaling up to (almost) match the length of line in one turn on the spool, the encoder and power requirement on the motor remain fairly constant, so the diameter of spool to use is a matter of convenience (3d printer capacity and overall thickness)

[1] the big problem with trying to make a safe homing routine for the maslow is that if you are near the top, it’s not safe to retract the lines, and if you are near the bottom, it’s not safe to extend the lines. Even knowing where you are within 1/5 of each of the line lengths is enough to let you figure out if you should extend or retract each line to get to a known point in the rotation. It would not be hard to put another couple of bits of absolute encoder on the spool to get even more absolute accuracy. (a quad encoder is a 2 bit grey code system, only 1 bit changes at a time)

If we don’t have the heavy chains sagging, and limit ourselves to 1/4" bits or smaller, I wonder how light a sled we can get away with? Between BLDC spindles and trim routers, there are a lot of good options we could use if we can 3d print a Z axis that would be a lot smaller/lighter than the full-size routers we use on the stock maslow. But if we end up having to add more weight anyway, why bother.

here is a very rough cad for the concept

I like the idea overall. I don’t see any reason that it wouldn’t work. I really like the idea of the spool which threads as it unwinds to keep the cable feeding out from a constant position. That’s brilliant and I haven’t seen that done before. I think that the trick is going to be making it all work reliably, but I can’t see any reason it shouldn’t.

I think I’m going to try and print one to see if it’s as strong as I think it is
before I worry about adding sensors/encoders to it.