I’ve finally got a Maslow in the garage waiting to be tested and calibrated. I couldn’t resisit the temptation last night to spin the wheels before retiring for the day, and found that I got a little blip from the motors and then my hacked power supply tripped out. I’ve harvested a rinky-dink one from an old microATX PC. My guess is the load is a little to much for it and it cuts out. Luckily I have a box full of old ATX PSUs that I’ll be able to rifle thru for another bigger version.
Just wanted to find out if anyone else has used an ATX as the source of their Maslow’s power? And, if so, did you encounter any problems worth knowing about?
Cheers,
Miles

one thing to keep in mind about computer power supplies, they used to pump out a lot of power @12v to poer the disk drives, but over time that’s become far less of a requirement and lots of power @5v (or less) has become the requirement (to power graphics cards and CPUs)

so check your power supply ratings at the different voltages.

I think the MicroATX PSU is used to dealing with a single HDD and little else, and it was from a very old PC, possibly circa 2000! Thank you for the ~5A figure, that will help as I trawl through the power supply bin.

Okay, the microATX just can’t hack the load and repeatedly cuts out, so I swapped it out for an ATX 750W that had a dodgy 3.3v rail rendering it unusable for a PC. It’s running and seems perfectly stable. Probably a bit of an over kill at 750W, so I’ll probably grab a sealed one from the electronics store in the future so that I don’t have to concern myself with dust build up in the ATX.

To update: I now have a bigger sled, this causes more drag, and is possibly the cause of the 750 watter also tripping out. I’m gonna get me one of them fancy ones off da interned! ;¬)

Most of the PC supplies require a minimum load one one or more of the outputs. Your better off just buying power supply like this one.

Most of the PC supplies require a minimum load one one or more of the outputs. Your better off just buying power supply

I was hoping I could use this for a quick test to see if my current (12V/5A standard Maslow) is heading toward nirvana. For a purchase I wait 30-40 days. Do you rule out a chance? 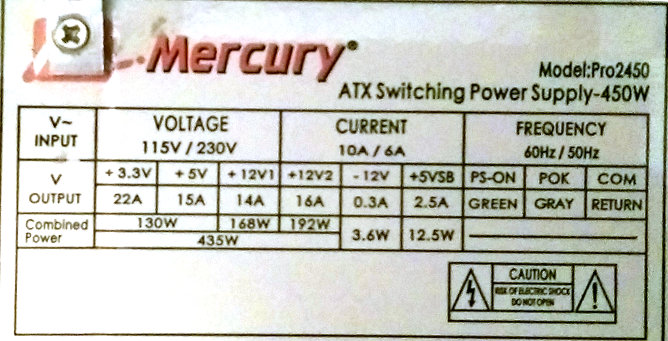 It should work but you may need to add load to the 3.3 V and 5 V supply. The 3.3V may require about a 1 amp load. I suspect the it is one that will require some kind load. There is also a wire that shuts down power supply, I forget if it need to be pulled low or high to start the supply.

Yeah, should work for testing to make sure stuff works, but I’ve not had much luck with the two ATX PSUs I’ve used, even with a ceramic load resistor across 5V. It would seems that the load drawn when both motors are working hard is enough to trip the supply. I imagine it’s quite a noisy load and as mentioned in comments above PC PSUs don’t like noise, they are designed to be super smooth for smooth operation!
You’ll need to short the green wire of the multiple 20(+4)pin connector to a black wire to get the PSU to start. I’d advise having a load on it if you value the PSU.

Thank you for the comments. I’ll give it a try and if it makes magic smoke, I’ll try not yo inhale

If noise is an issue add a largish capacitor across the power leads, and maybe an inline inductor or ferrite bead, or a few wraps around a ferrite toroid depending on what you can find in your junk box.

An awful lot, too many imho, of 3D printers use ATX supplies for power and only use +12v. If you have the option use a single rail supply, otherwise try to run what you brung

there can be some issues as the motors stop (ringing), but more likely, the
power supply just doesn’t have the power at 12v. It used to be that power
supplies had beefy 12v rails to run lots of hard drives, but over time the power
needed by hard drives has dropped, while the power needed @5v and 3.3v for the
cpu, memory, and video cards have skyrocketed.

Have a new PSU for the purpose to try later. Also accumulated all my duffer ATX PSUs and have a grand total of 5. As such I might review the use of one of the older models that has a duff 3.3v rail, but more likely has the afforementioned beefy 12v. I could then use the 5v to power a small fan to keep the H-bridge super-chill!