Is there a specific height the ring system is supposed to be adjusted at? 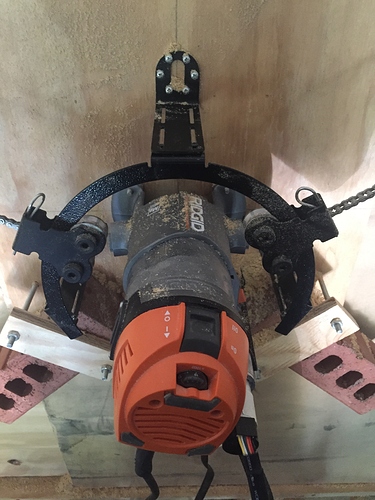 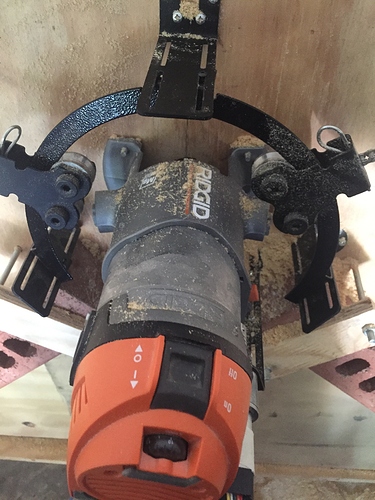 Should it be higher up like the first pictures or lower like the second? Also should I tighten the small nut and bolt to where it can’t move up and down?

Is there a specific height the ring system is supposed to be adjusted at?

Also should I tighten the small nut and bolt to where it can’t move up and down?

Are you referring to the mounting bolts for the ring? Yes, those should be nice and tight, otherwise the ring could shift during cutting.

When I built my system I did not see any instructions to tell how to set this so I just “best guessed” the height and installed the ring on the sled. After a number of really bad test cuts, while trying to figure out what I did wrong, I happened to look at the frame (from the side) and noticed that the chains were not at all parallel to the plywood I was cutting and this was allowing my sled to lean out at the top.

Once the chains “looked” level with the plywood, I lowered the sled to the bottom center edge of the plywood using GC and used a stiff metal ruler to measure the distance from chain to plywood (both near the sled and at top edge of my plywood). FYI, I have a support rim around the entire working surface of my frame to support the sled at the edges. I used the averages of those measurements to determine how much to change the vertical position of the ring.

I then moved the sled all around the plywood’s outside edges and corners using GC to check for consistent contacting between the sled and plywood. I was satisfied with the contact I saw.

I hope this makes sense. It was much easier to do then to write down.

James, you have the right idea in keeping the chains ‘level’ with the plywood,
but you are correcting things incorrectly.

Then once the ring is locked down, you should look at the chain angles and
adjust the frame (or add wasteboards below your workpiece) until the chains are
close to parallel with the workpiece.

Does it refer to the entire sled?

Yes, the entire sled.
My unconfirmed opinion is that you move the sled to the middle hor/vert and balance there by just pulling the attached chains away from the sheet. This way you can see when the top of the sled is slightly tipping towards the sheet and that’s where you are good to go (if you have your motor-sprockets ~ same distance as 2). 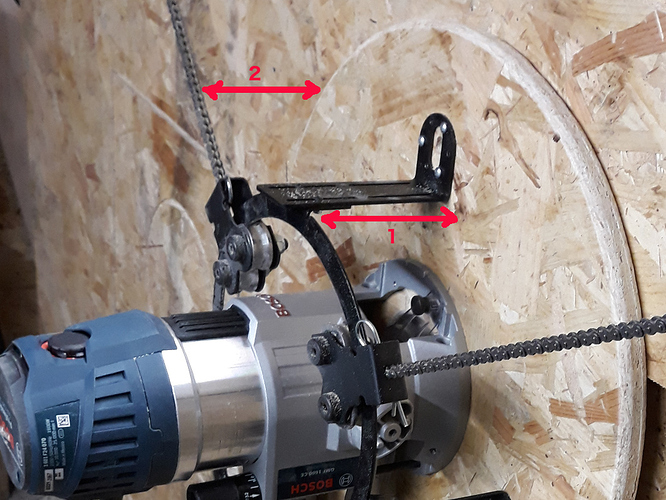 image.jpg1062×797 326 KB
My superstition is that you get a difference ‘balance point’ compared to tie a string at the middle top of the ring.

(Credit for the picture to @ruaridhmac)