I clumsily lost one of flat sprockets for my Maslow - any chance I can get the exact specs and/or recommended place to purchase a replacement?

Also, would be useful to have a list of replacement parts and distributors as a resource. The easier to access (i.e. Home Depot, etc.), the better, so projects aren’t halted while waiting for parts to arrive.

We’re working on making replacement parts for all the parts available. So far we’ve just got the main PCB and router bits listed, but we’re hoping to have more parts up soon.

The good news is that if you don’t want to wait, really any #25 sprocket will work in that position, there’s nothing special about the ones we designed.

The wiki list of DIY part sources lists it here:

McMaster is mighty proud of that sprocket, though. Ouch!

I got two of these after one of my sprockets sproinged off into the distance. Of course the swamp rats returned it into a many times previously searched location the day after the new ones arrived

Find many great new & used options and get the best deals for #25 Sprocket Idler 10 Tooth 4mm Bore for Industrial Roller Chain at the best online prices at eBay! Free shipping for many products!

A much nicer price…

Was it you who told me about them?

I don’t think so, but it is a good find.

Cheers! This is exactly what I needed.

It was I that directed you to those.

And I appreciate it, even if the swamp rats returned the original as soon as the replacements arrived. Maybe I’ll be able to use them in the plasma cutter version or help out a nearby Maslowvian neighbor

I ended up ordering 4 of them and will be using 2 for the lower chain tensioner bungee system and one placed slightly below and just inside the motor sprocket to keep the chain wrapped around the motor sprocket completely. Kind of like people are doing with bolts.
Speaking of anyone know if that will alter my motor dimensions? As in since it becomes the actual pivot point for the chains…

Please feel free to add alternate suppliers to the wiki BOM items that you might find. Just be sure to note any differences from the original part.

I’m waiting till i actually get the thing running to reveal all my secret sourcing locations. Then I plan on making my list available…
I get lost in Github. I’m figuring it out I guess, but I know a large portion of the population just will never get it. So I was also planning on making a rich text file available in a post here. I completely get how GitHub helps the development, but I think as this goes mainstream more a package/thread/zip with directly clickable and downloadable links should be available. I’ve tried to turn a couple people onto the Maslow and they just gave up all interest when they got to GitHub. I see how it’s extremely overwhelming to those not in the loop.

right on. For sure wait until you have some solid conclusions together. but I took the opportunity to make a Wiki HowTo topic…

don’t put an idler between the motor and the sled (it would cause major errors
in the math), put one on the slack side of the motor if you think the simple
nylon bushing isn’t good enough.

If you give them a link to the wiki, how is it any different than any other
wiki?

How if it’s just sitting where the green circle is and one where that bolt is. They only keep the chain wrapped around the drive sprocket. 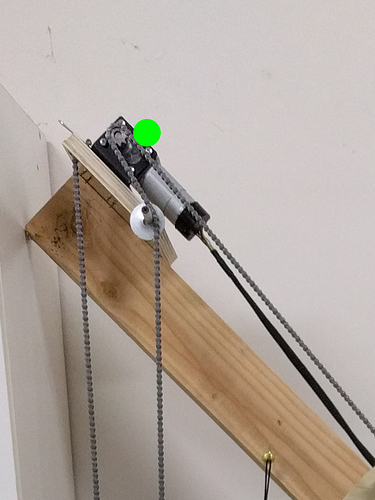 I don’t understand your question.

you eon’t want to try and restrain the chain where the green dot is, you need it to be able to swing from ~10 degrees to ~80 degrees where the sled is. The only place you could sanely put an idler is on the bottom side of this, replacing the screw/bushing that is keeping the chain wrapped around the sprocket.

An idler sprocket where the green dot is in theory should only provide tension to ensure that the chain never jumps on the drive sprocket.The chains would still retain all the movement necessary, since all of it would be below the idler sprocket. My reasoning for this is there’s constantly talk of jumping links and chain falling off. This would just about completely eliminate that.

This would not solve the chain falling off problem, because it would now be
falling off the idler and causing grief there.

adding the screw/bushing helps a lot, and having the motors the correct distance
out (so that there isn’t a lot of front-to-back angle on the chains should
address the rest of the issues.