Ring not perfectly round

I’m not trying to be nit-picky and I understand the real world outside of CAD has tolerances and thus nothing is perfect but I just measured my ring inside diameter (where the chain guides will ride) and it’s obround by a difference of 2mm. I did this by tracing the inside diameter then rotating the ring 180° to complete the circle. I then repeated the process but this time 90° turned from the original circle. The overlapping circles where off by as much as 2mm. Don’t know if this is enough to be alarmed about or if I got a slightly off ring. Just passing on my findings.

That definitely seems like enough to be a concern, let me check several and see what the standard deviation is.

This is without the ring attached to the sled, correct?

Yes, just the ring flat on it’s back all by itself. I hope I’m not calling a false fire drill. I tried to measure the best I could. I’m interested to see what you come up with.

I just did some checking on my ring, the variance is less than 2 mm, probably 1 to 1.5 at the outside. The flat spot look to be at the top edge on mine at least. Given that the variance is 0.5% to just under 1% (nominal dia I measures was 208-209mm). With the cutting variance + powdercoating (generally about 0.3-0.4 mm thick) thats not too bad. it could just be the powder coating ( I assume thats what it is) running to the lowest spot on the ring edge.

On a side note I’m not sure a painted or textured powder coated surface is the best thing for the bearings to be running on, a raw steel would probably be better. Obviously stainless would be very expensive by comparison so probably not an option.

I bent my ring from a 6mm stainless bar, and then epoxy’d the ends together - the best I managed to get was about a 1 - 1.5mm deviation, and that was after hours of fettling and very sore hands! I’ve yet to see the issues this may cause, but the cutting is very soon to commence ;¬)

After cutting my final sled I had to manipulate the ring slightly to get it to align with the drilled guide holes before screwing it down. It was a bit of a concern. Figured flex in ring would be greater than cut holes. I’ve yet to calibrate again with the final sled, but found a cut 16" d circle looked really good but was off 1/16" on one axis and close to 1/8" on the other axis.

That definitely seems like enough to be a concern, let me check several and see what the standard deviation is.

What did you find when you checked the rings for accuracy?

So I just cut my sled, and when I went to mount the ring to it I found that the alignment holes don’t quite line up with the bottom of the brackets. Here is a picture of one of the three holes with the brackets lined up with the holes the best I could get (trying to distribute the error across all three holes equally). 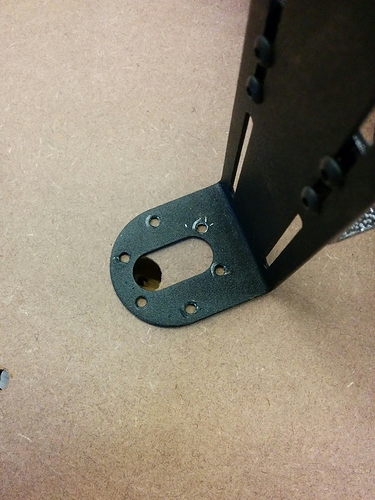 My sled appears to be dimensionally correct (almost exactly 18" diameter in both X and Y, the three alignment holes are all the same distance form the center opening). I’m wondering if this is actually an issue with the ring instead of the sled. Can somebody confirm if the alignment holes are supposed to match up with the end of the slotted hole in the mounting brackets?

You are right that the holes should align with the edges of the mounts: 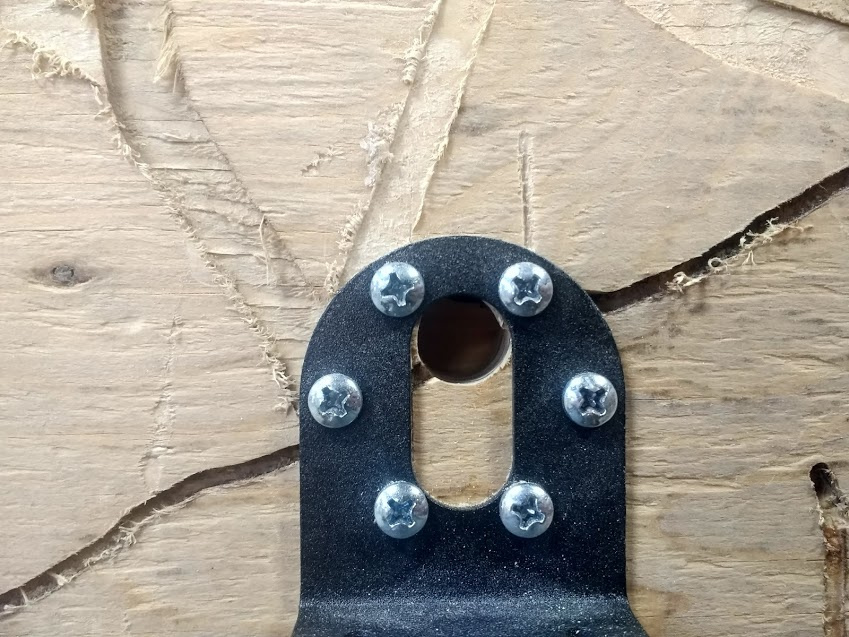 One thing to keep in mind is that the holes are not an equilateral triangle so if anything is rotated they will be a little off, but as long as you are putting on your ring in the normal direction with the bricks down that shouldn’t be an issue.

Are all three holes off by that much? I can’t imagine that the ring is 1/4 inch out of true

To give you a better picture of the misalignment, I lined up the “top” (center) hole correctly, and then lined up the two bottom holes as best as I could and took three photos, one of each hole (starting at the bottom left, then the top, then the bottom right).

(Yes, brick holes are near the “open” end of the ring, and it doesn’t line up anywhere near the holes if I rotate it…) 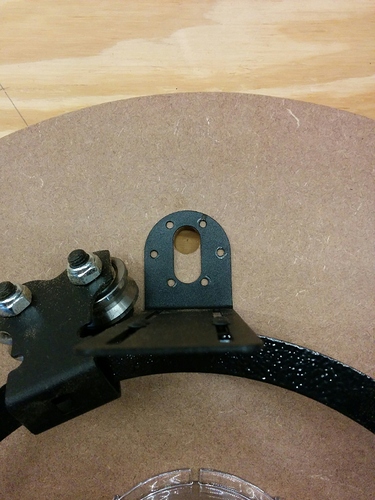 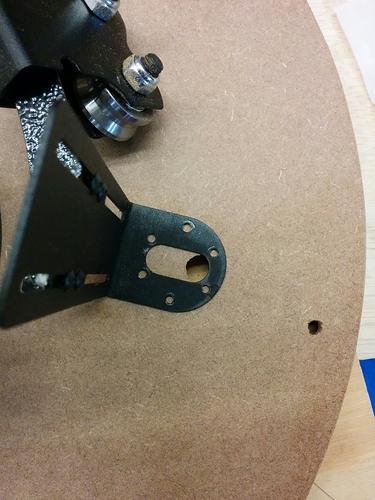 I really don’t feel like taking all of the brackets and rollers off my ring to lay it on a piece of paper to check for circularity, but I did measure the distance between the bottom two inside corners at 8 and 3/16 inches, perhaps you can check that against a known good ring.

I plan on screwing it down without putting undue torque on the ring (I tested making it conform to the holes and the ring definitely was deflecting), averaging the error across all three holes. It appeared to work just fine on my temporary sled, and I figure as long as I average the errors out the center of the ring will still be very close to the center of the bit.
Jay

I went ahead and used a laser cutter to cut out a cardboard template of where the holes are supposed to be on the sled, and held it up to the bottom of my sled. 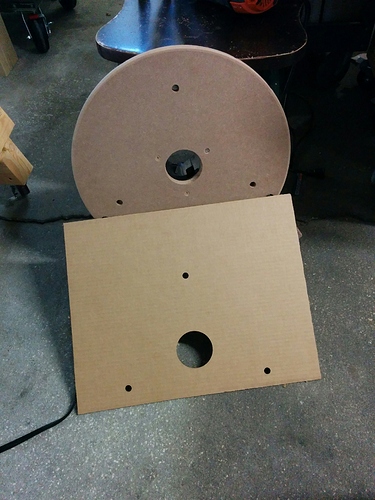 Although the holes were not a perfect match, the cardboard template matched my sled a lot better than the ring brackets did. 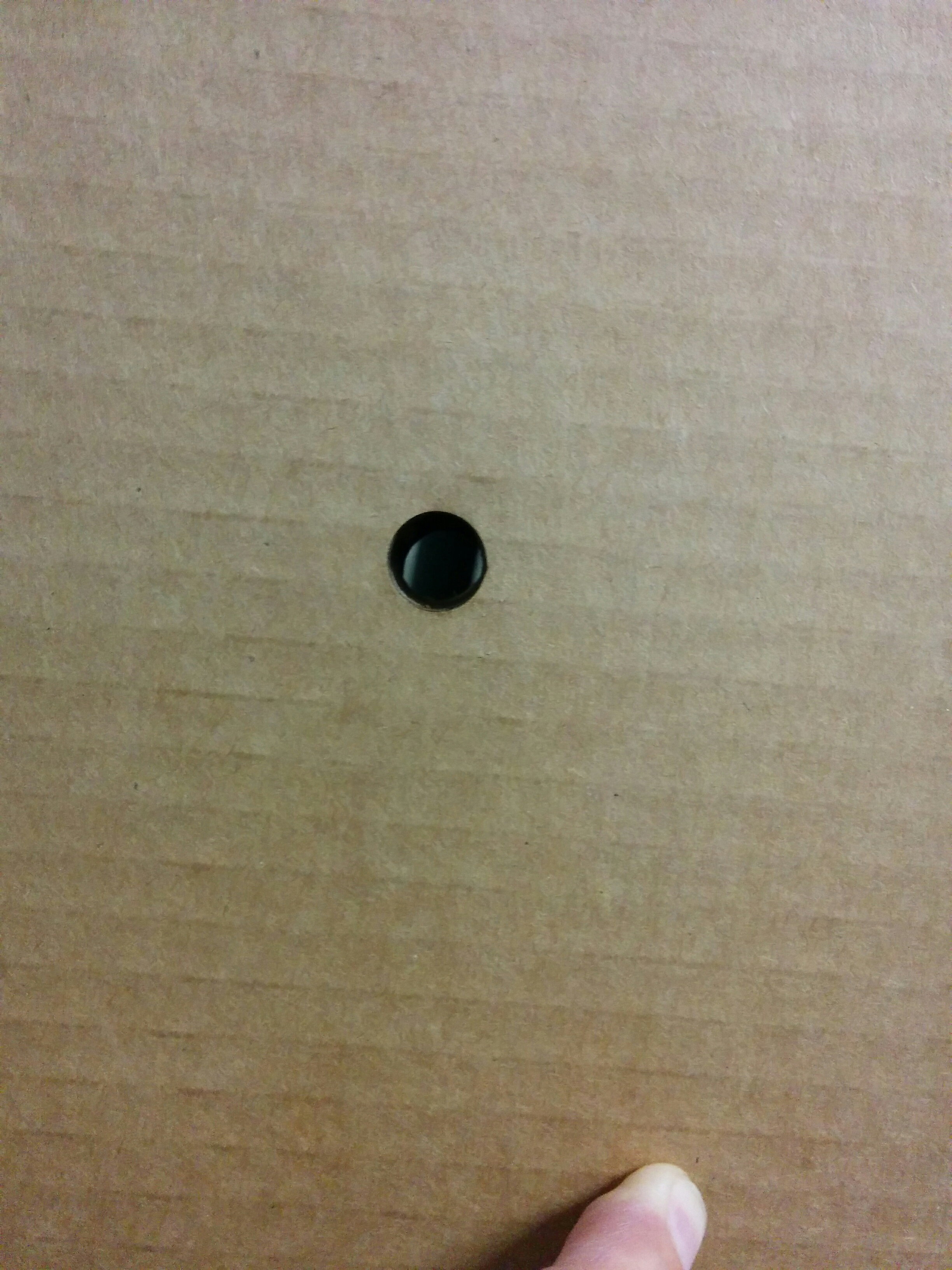 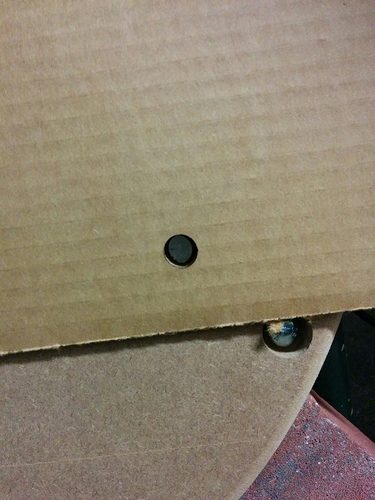 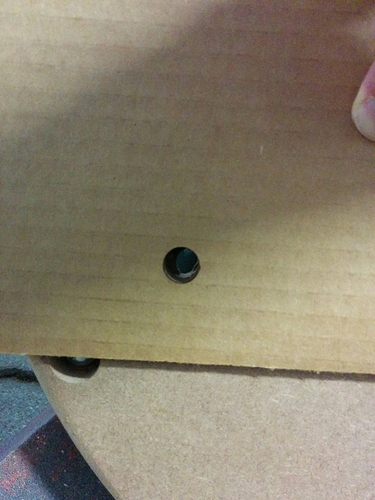 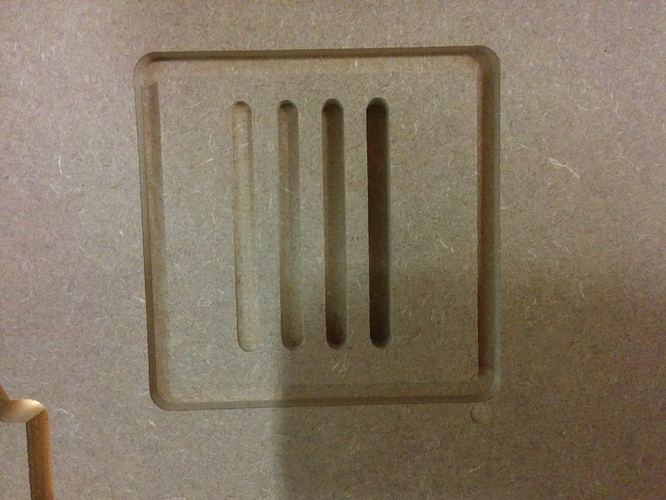 can you cut a cardboard template to show how out of round your ring is?

you aren’t the first person to report problems with the ring being out of round.

I’ve measured the radius of the one I got to be constant within 0.25mm. I haven’t mounted it yet, but mounting shouldn’t alter the shape.

@dlang - I don’t particularly want to unmount my ring (just did that moving from the temp to final sled), as the sled/machine appears to be working just fine (or at least, within what I was expecting accuracy wise) despite the mounting holes not quite matching up. Should I ever have to remove the ring I’ll be sure to measure that.

EDIT: Putting a photo of the final result up top here, read through the thread to see all of the things I tried before getting it this nice… [IMG_20180501_095030] Original first post follows: First project with the Maslow that wasn’t a test pattern or sled…Pokemon themed birthday sign/table topper thingy. [IMG_20180427_212217] Playing around with different depths on the three pockets, and didn’t quite get the design file right (line in the middle needs to be thicker, and center could be mor…

Regarding the powder coat, others have commented on smoothing the edge out… I used a fine grit sandpaper on mine, it comes off easily, and the machine runs much smoother.

I came across this topic while researching the dimension to create a new ring out of stainless steel (since I’m so new, I’ve been “hard” on my ring, having bent it already). It was mentioned that the holes are not equidistant on the ring. Why was that? I want to understand so if I have one crafted with the holes equidistant, I know if it would cause a problem. I plan to have it crafted with the 210 mm across from inside edge to inside edge, 235mm outer edge, so I can have 1 inch wide to put 3/8" equidistant holes in for screws to attach it to the sled. If, that is, it would work properly.

Thanks for any insight!

The spacing of the holes doesn’t come out to nice even numbers because it takes into account a lot of factors like the thickness of the metal of both the ring and mounts. The legs were also angled to make it easier to mount the z-axis so the lower two are not facing directly away from the center of the ring (when they were one landed right where you want to put the z-axis).

Thanks! If equidistant would interfere with the Z axis kit, I can understand the altered location.