Second real cut, was going great until one particular spot on a circle

So I was cutting the stool, and it was coming out great until the top left side of the circles and it reall freaked out. I’m still not sure why. 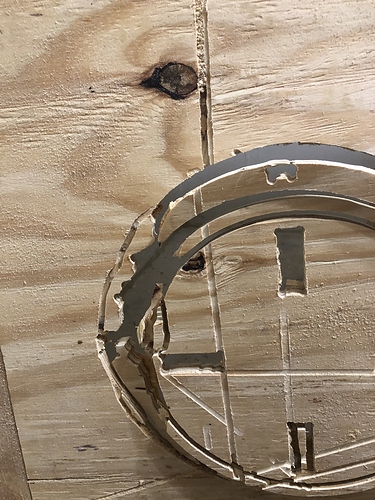 It cut a perfect circle before though 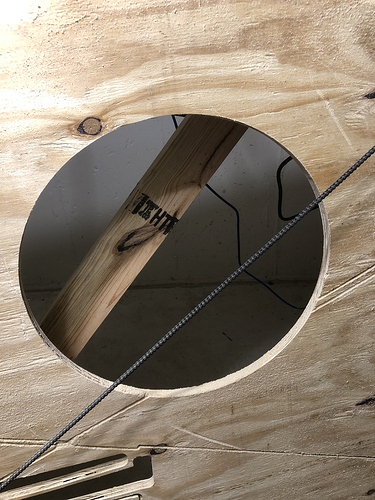 Is that one file that produced the results? Is the “outer” circle the desired diameter or is it the “inner” circle?

Most bad cuts I’ve experience have been due to a physical interference. Either the sled catching on an edge of plywood that’s been cut or the vacuum hose hitting the floor and messing with the sleds position.

It’s supposed to cut two circles with three cuts. I’m thinking that the sled must have been catching on that deep vertical cut that’s about 4 inches from the error somehow.

I generally use tabs in my projects to keep pieces secure until I’m done cutting (original frame with a spoilboard). But with your frame design, it looks like the pieces that are cut out should drop out the backside if there was no crossmember/leg preventing it from doing so. Something to consider… maybe a piece didn’t drop out the back and hung up the sled.

I am thinking about setting up a camera at the right edge and top edge of the work surface so i dont have to guess when stuff like this happens. I am voting for the sled hanging on the nice vertical line and the dropping back after gouging your work.

I was watching it cut, and it did the error from the very begining of that side of the circle. It was cutting fine and once it reached that point the sled went straight down instead of around like a circle, and then it jerked around a bunch and eventually got back on track to making the circle.

I went ahead and let it do all three cuts just so I could watch it and see if I could figure out what was happening in that one particular area.

It was also tabbed, but in the picture I already took the parts out, and am holding them a bit awkwardly in the circle just to show the area where the error was happening.

Was the circle that was cut out perfectly before done using the same file that didn’t work? If different, maybe its the file…

Yeah it’s a different file. The good one was a sled file. The bad cut was one I created from the open desk stool file

Would you be willing to post the ‘bad’ one? I’m trying to learn to spot things in a gcode file they cause problems like this.

Sure! I’m in class right now, but when I get home I’ll upload it.

Thanks for uploading the file! It certainly looks clean to me.
Trying to think of mechanical things that could be involved, did the router depth latch pop out of its socket an let the bit dive too deeply at the point in the cut where things went wrong? I’ve had that happen, and the bit couldn’t cut fast enough to follow the cut path, so the sled got jerked around. The position error checking in next week’s release would notice that and halt the cut.

Could it be that each pass is cutting 1/4-inch inch? That’s pretty aggressive.

The direction of cut matters too. I am guessing that the router was cutting counter clockwise, and thus relying on gravity to provide the force to hog through the wood. In that condition, cutting in deep passes could cause the bit to wander if the sled is not heavy enough to push through that amount of wood fast enough.

For the previous circle, was there any difference in the speed or depth of cut?

How does the Maslow know where the sled is? Does it monitor the tension? It occurs to me that if the sled is not moving down quickly enough, the Maslow still would have extended enough chain to be in the right position, but the work piece would be holding the sled up on the bit until it could cut enough to put tension back on the chains. Perhaps I am looking at this the wrong way?

It was the same speed and plunge depth.

Could angle be a factor? I’m thinking the machine may raised too high.

What angle are you using?

Bahrain forensics has no clue.
Abnormalities have been sighted, but if they are related is a different thing.
In GC there is a optical difference in the 4 cut-outs of the seat related to Z-moves. 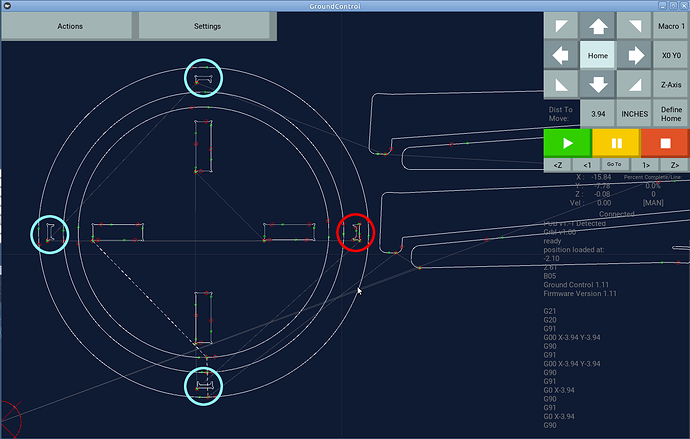 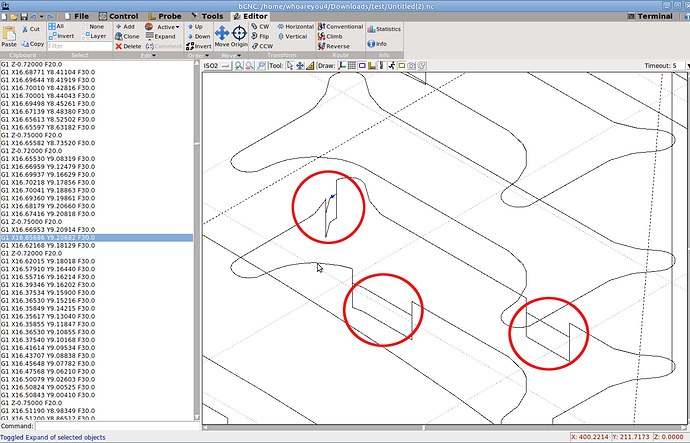 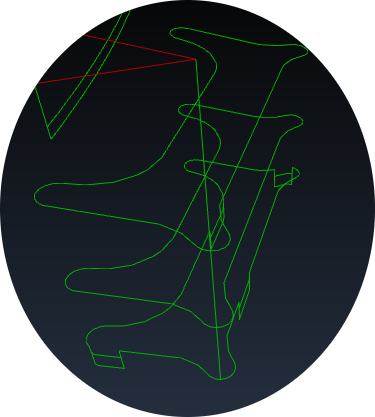 I attempted another cut, just of the stool.

I did cut in a different spot this time, and I flipped the plywood over so There wouldn’t be those vertical cuts from previous work.

The circle cut out very well, I think.

For some reason, the pockets were in the wrong spots on the second cut, despite being a copy and paste of the first one.

I do have to fix the pockets, and the pocket width on the underside of the seat. It looks like they were designed for 1” plywood and I’m using 3/4”. 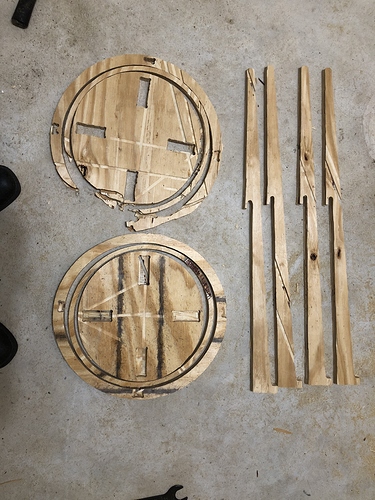