I’ve been reading the forums for a while, there sure are a lot of interesting and creative people here, i’m really enjoying the discussions. I don’t have my maslow yet, the space is allready cleared out in my garage but i’m still on the waiting list. I tought i would save me some time and get started on the sled and the frame allready. I would say i’m more a woodworker then a cncer, so my approach might be a bit different.

The triangular mathematics seem to be where everyone is going, so i tought i would try to start from there. The linkages are a good idea, but i think the ring is more error-friendly. However I don’t see why the ring couldn’t be made out of wood, provided you can get it round and rigid enough.
I allready have a makita RT0700 router and i don’t plan on buying a new one. The attachment options that come with it don’t provide a reliable place to mount a Z-axis, so i tought to go for the router lift idea. After some rough sketchupping i came to an idea that should place the router bit in the exact center of the sled and still have room for a lift. 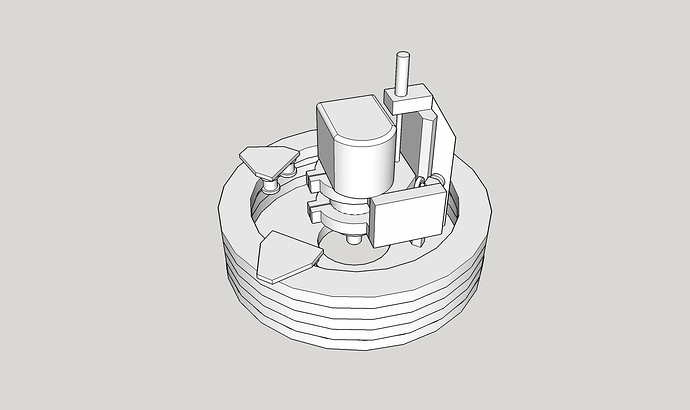 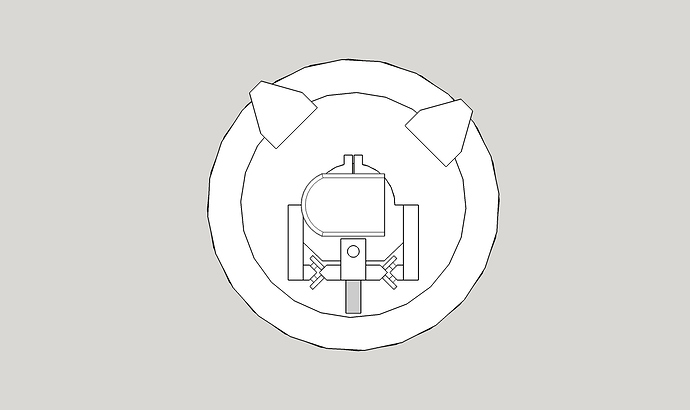 The inner diameter of the top ring is smaller then the others in the stack and i have some bearings that fit over these. i tought 2 bearings per connection would eliminate any wobble.

If anyone has any thoughts what would and wouldn’t work, that would be really apreciated, i’m making a part of a machine that i don’t know yet, i would be really surprised if i didn’t make some faulty assumptions.
I know i probably overbuilt, but i think some extra weight and rigidity won’t hurt.

it’s worth a try, just make sure that under the max amount of force (~66 pounds per chain) the wood doesn’t develop dents that will catch the rollers.

Along the same lines, I think you would have to be more diligent at hooking the sled to a hook when not in use to keep dents from developing even when not under max load as it sits idle between uses.

what do you do about dust collection (with the lift below the router, it will catch a lot of sawdust)

you may end up wanting to add weight to this (or the router lift may be heavy enough), both to reduce the rotation of the sled, and if needed to cut properly under low chin tension.

Thanks for the reply, all good toughts which don’t seem insolvable.

i was thinking to laminate the inside of the ring with those things you laminate the sides of fiber (like this) it’s realy durable. I tought to heat it up and then put an inner tire in it and inflate it to make sure it clamps perfectly on all sides.

the sled goes off the hooks when not in use, because the frame will pivot to the roof when not in use. my shop is 10m by 3m, so i need the space to assemble the things i make.

for dust collection, i allready have a half decent system in place, i tought to place a plexi roof of it, so it is almost closed off, and then just suck the air out of the allready pretty close circle.

for weight i could drill a few holes trough the sides and bolt some scrap metal on the outside.

Looks like a cool idea to me! I would be concerned about the shape of those roller brackets. The force on a flat bracket like that will tend to “twist” the rollers so they don’t put even force along the surface of the runner, and they could pivot enough to rub on the frame (the middle diagram below). If you made a bracket with a “jog” in it that brought the chain attachment point back to the center plane of the bearings I think it would be solved (the right diagram). 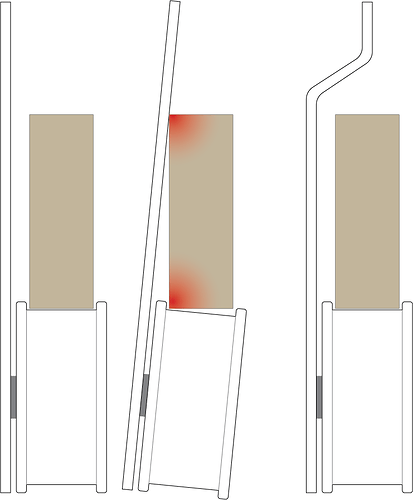 As long as the bearings can roll smoothly on the wood ring I think this is a pretty solid option.

The shape of the roller brackets wasn’t really thought out yet, but you make a good point., guess i’ll make a few spares before i make the holes in the middle.
I was wondering what diameter sled is practical? too big and you lose too much material at the sides, too small and it has a tendency to tip over i think.
I’ll try to take a lot of pictures while i make it, and try to use as few tools as possible, to keep with the ‘the maslow had to be able to be built by the maslow’ philosophy. I like a challenge

lose too much material at the sides

too big and you lose too much material at the sides…

If you’re talking about the sled tipping off the side of the material then the size shouldn’t really matter because the center of gravity doesn’t move if you widen the sled evenly. If you’re running into other physical limits like the sled hitting the floor or something then that’s a different story.
As @blurfl mentioned, temporary (or permanent) work area extensions seem like a good solution to me.

If you are using triangular kinematics, the sled can be any size. As noted, it’s
ok to hang over the edge of the workpiece a bit, if you try to take the bit all
the way to the edge (with no additional support) you will have problems no
matter what the sled size is.

with the normal kinematics, you could run into grief if the cain mounts are too
far apart (meaning that a chain gets too close to vertical), but with the
triangular kinematics, that’s not an issue, the chain will always point at the
bit no matter what the sled diameter.

the 18" diameter sled is trying to avoid point loads on things and have enough
area that it’s unlikely to fall into a pocket that you cut. It’s exact size does
not really matter.

Not sure how far you’ve gotten on this build, but you might want take a look at this. If you’ve made the rings, you’re halfway there… I haven’t built and tested yet, I’m still gathering parts and thoughts.

Continuing the discussion from Throwing my hat in the sled modification ring: I’m, splitting this idea from @awlinc out of the massive ring sled discussion, because it’s my new favorite and I think it’s very promising. A lot of the other triangular kinematics designs require custom hardware like those offered by @bar (laser cut steel ring & v-groove bearings upcoming), @dlang (steel top ‘pantograph’), and @pillageTHENburn (laser cut birch 45 degree ‘pantograph’). All of these solutions look a…

how far along, not at all.

Life has a way to get in the way of hobbies.

2 kids allready take up a lot of time, now we’re thinking about expanding the house or moving or something. The holidays are comming up, so free time will be a minimun there as well. I will be ordering the maslow in december, so i figure i still have about 2 months to clear out the garage again (amazing how quickly it floods again after you clear it out), build the sled, build the frame, prepare the raspi (a working image would be helpfull), draw a few things to start cutting something as soon as possible (and on that subject, learning to translate my drawings to cnc language).

With any luck it will get stuck at costums comming here so i get a month more to prepare, i’d hate for it to start pointing and laughing at me for my horrible time management skills in a year. I haven’t even been able to build the frame in sketchup yet.

That said, i allready hade the bearings for my design, so i’ll try that first, but this definently seems feasable.

You can use a Maslow to make cabinets to organize your garage. Free design software was mentioned here, and at least the design phase worked on my laptop. I don’t have the link handy but perhaps somebody else recalls it.

Alas, nothing yet discovered other than maybe a black hole or perpetual garage sale will solve the refill problem. Adding more buildings just makes it worse

I’m not planning to use the maslow to make many straight cuts, also the shelving is already in place, it’s just the organizing that’s lacking. Found a raspi on sale, €35 for raspi, case, supply and µsd. also bought an oscilating multitool on sale to cut the tabs (was planning to buy one of those for a while for other reasons). For now the weekend is free so i think i can finally start building (which is what i always say right before some disaster happens).

A wood burner can burn all types of stuff, it’s kinda like a black hole, just with more black smoke