Straight line curves down at top of the sheet (solved)

Any idea why a straight line at the the top would sag down, to spike up at the end?
FW & GC 1.07.
The gcode has a clear vertical XY coordinate to the left (cut counter-clockwise). .nc and log are in the .zip leftcut.zip (235.2 KB) 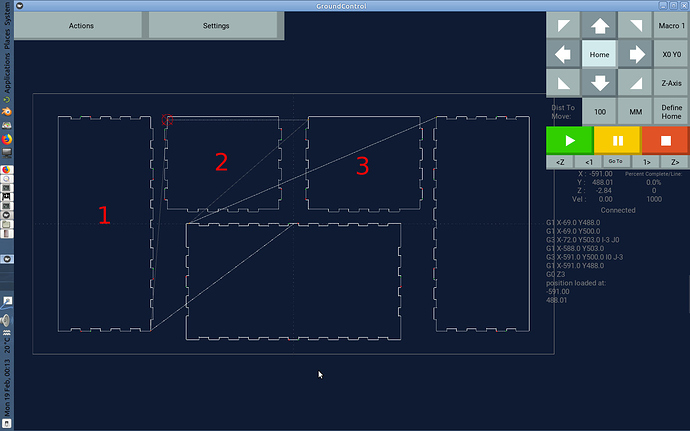 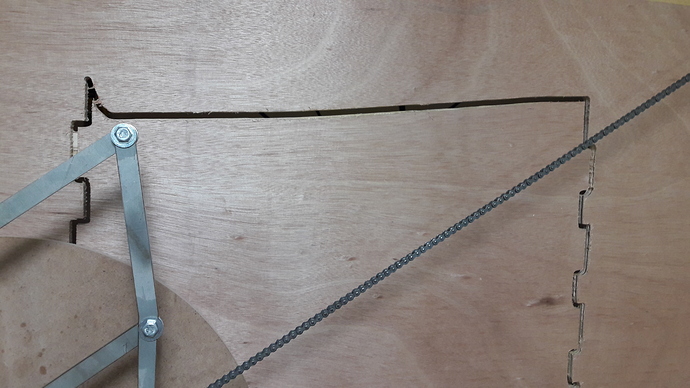 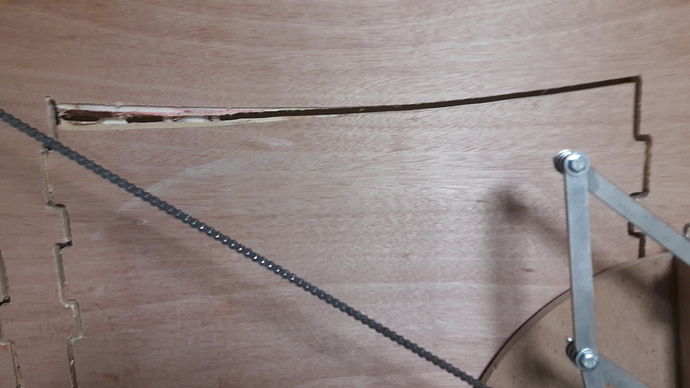 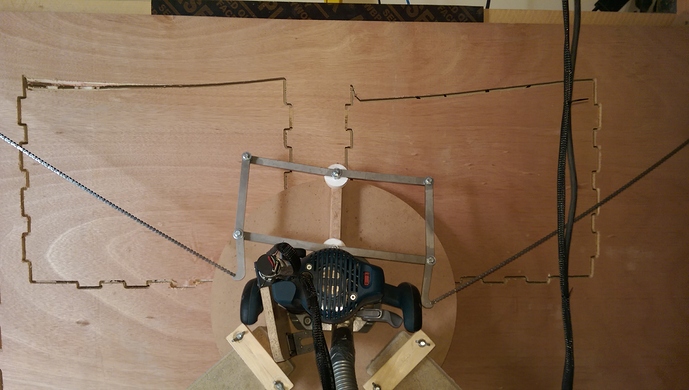 Part 2 had 3 different runs on this error for each pass (seen in second ply pic), first a higher error, then a lower error, then the final error between the 2 others. On part 3 the error was constant with all 3 passes. It seems like with the left move the motors are not coordinated.

Update:
I cut part 2 out of the gcode and made it a single piece.
Same thing happens, this time a bit flatter curve than the past.

Question: Would I find a ‘stall’ message in the log or terminal?
I’m surely stretching the limits on what the Maslow can lift and the cut is at the top, so I’m wondering.

Huston we have problem …

Thanks, can run that with 1.04, perhaps also a try without bricks. 2 tests make it worth to go back to the workshop. Thanks for the heads up.

This is very strange. Based on your chain sag correction value, your sled doesn’t look to be overly heavy. Any idea of a ballpark of your sled weight?

Based on your chain sag correction value

Where did you get that from ?

Where did you get that from ?

I pulled it from your logs. Looks like you went through the calibration process and got 27.81713676?

Interesting, nearly 16kg/35lbs is getting heavy. I don’t have enough experience to say if this is an issue or not though.

I’ve seen ‘stall’ massages in the past, but not for a long time. I was thinking that spitting them out would be a chance to narrow this thing in. Not testing any more tonight, but taking the bricks off will give some feedback tomorrow night.

chain has jumped the teeth on the sprocket

I know that sound very well. I was with the Maslow all the time, no chain jumps, plus I have 3 surrounding cuts in 3 passes that I can put ruler on. They are at 90°.

I agree, this doesn’t seem like a chain skip, otherwise we would be seeing similar issues across the entire bed. It could be a kinematics problem, but then I wouldn’t expect it to ride up to the proper level at the end of the cut. My first guess would be a motor stall/power issue, especially if it’s at the top of the board, but didn’t see any messages about it. Very strange indeed.

Since I’ll not be able to test, lets agree that before 24 hours a new test was done with less weight. That should narrow things down. Thanks for the heads up guys. Same place, same time tomorrow

Could your linkage kit be sticking, causing the sled to be at maximum rotation before breaking free again to let the router bit get back on track?

Good point! Let me dig in my GF videos, if she caught that part I would be able to see it.

Now that a thought about it more, I think, no.
Part 2 has 3 passes, first is the top cut, second the lowest and third in the middle. Sticking and releasing would be an explanation for that.
Part 3 does all 3 passes at the same cut and error. I would expect a sticking kit to be more random.

Edit: The parts are symmetrical to the middle of the sheet. So I would expect a mirroring rather then a copy.

Trying to put together a custom tripp trapp. Im having some trouble… my cuts on the perimeter starting from around the 4th pocket and above are arcing. Not sure if its 1.06 (just upgraded.) Called for chain re calibration and when completed, my sled was around 9 inches low. Wondering if I need to completely recalibrate my machine. Or maybe its my .nc although it is showing up correctly on gc. [image][image][image][image][image]

Definitely something going on in software.

To help diagnose the problem, run it again without a router bit and the router turned off (that way the bit is not in play). I’d wiggle the sled a bit as it progresses from right to left to see if that changes anything. Just a thought as it would help eliminate linkage kit as the source of the problem… and would be safer as the router is off.

I ran it twice yesterday, similar to what you wrote.
Weird thing is, the velocity is around 30 then drops to 14-15 when the arc begins.

if the feed rate is reduced, does it still arc?