my Maslow acts weir, it cut perfect nearly everywhere except the top ares, about 30-40 cm from the edge.
When cutting the file with a horizontal lines or just manually move the sled with the router working, it would always move down a bit but reach the correct end point, so when moving from A to B, it will move from A, then slowly moves down resulted at not a straight line, but then when reaching the end it would move up and reach the correct end point. See the photo for reference. This is not problem of G-code, because it cut the file correctly at lower area, it doesn’t seem like there is any problem with chain or motor, because no visual sign or sound can be observed when this happens. When it move I see the sled moves down a bit and when it reaches the end edge it feel like the motor compensate the movement and pull sled up to met the correct end ordinate. And it always has a same pattern, if I move from left to right the sled would move slowly down then get up right to the end point, if I move from right to left, the sled would immediately move down then slowly goes up. 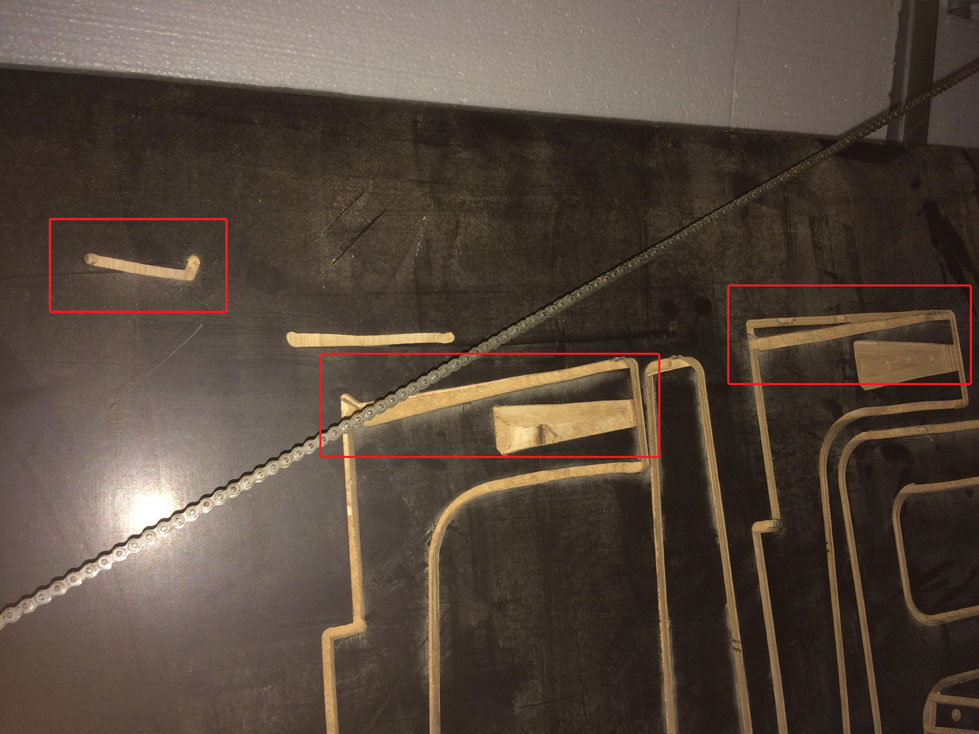 We’ve seen this issue before and found that lowering the feed rate was the solution, but I think something different might be going on here.

I’m tracking down an issue where PCB version 1.2 was not giving full power to the left motor. Are you using PCB version 1.2? If so will you try the firmware linked in the post below and let me know if it fixes the issue?

Motors wiggling but not moving 5 degrees during calibration Troubleshooting

I think I know what is going on. We just started shipping PCB version 1.2 and there are some improvements to the design but the firmware still needs to catch up to take advantage of them. Will you give this test firmware a go? (it will only work with 1.2). cnc_ctrl_v1.zip (82.0 KB) I think it might fix the behavior you are seeing

my PCB is ver. 1.1, so this firmware would not work I guess. I will try to go through full calibration process once more and see if its fix this. Which feed rate would you recommend? I usually run with 40-50.

You can adjust the maximum value for the feed rate in the settings here: 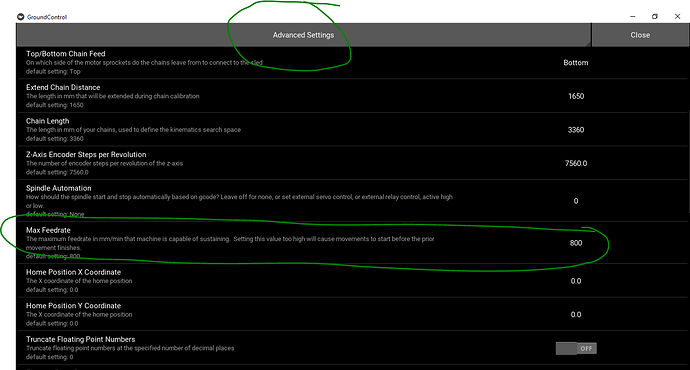 But I think that there is another solution. Is your sled particularly heavy? I think what is happening is that the weight of the sled is too much for the motors to move at full speed and I would rather figure out why than to just slow things down so that they can keep up.

Are the motors the normal distance above the top of the sheet?

We ran into this a few weeks ago, it’s caused by one of two things

if you slow down your feed rate, the motors will be able to keep up, but if you
can put a meter on your power supply, see if it’s voltage is dropping when you
are getting the hooking, if so, try getting a more powerful power supply. if
not, see about making the sled a little lighter (re-calibrate after you do so)

Can someone start a section of ‘common bad cuts’ with pictures and explinations?

we’ve got this ‘hooking’ problem on horizontal cuts at the top, and we have the
problem with downward cuts where the sled sticks and the cut wanders instead of
being straight.

there may be others, but these two have both come up a few times, and it would
be good to document this with pictures.

motors are 465mm above the sheet. The current weight of the sled is 12 kg, it used to be heavier and didn’t cause this, and didn’t show any sign that the motor can’t handle the weight. The only suspicion was the last time during calibration it was right after I update the firmware to 1.12, and during left chain adjustment, the position error limit popup, I turn it off to continue right chain calibration. Also I have cable extension on right motor, I should try to re-setup the PCB to use without cable extension to see if it cause this, but then why only the top area.

Those dimensions sound normal and the weight seems just about right also.

The position error limit popup was actually added to catch exactly this issue where the sled can’t keep up.

It’s good to know that you weren’t seeing the issue before but now you are. Removing the cable extension is a good place to start, although from the pattern in the pictures it looks to me like it is the left motor which is not keeping up

I had this same problem some time ago, I found that if I reversed the direction of travel for the cut the problem went away. That is when cutting right to left near the top the problem occurred, but when cutting left to right the cut was accurate. Was using v 1.03 of the firmware at the time. Been busy with life and have not used the Maslow much since.

Can someone start a section of ‘common bad cuts’ with pictures and explinations?

When we have seen it in the past, it is a problem as you move nearer to the
motor (in the past we saw it on both sides, when moving towards the closer
motor)

moving away from the corner requires less motor power, so it works better.

I will keep this in mind. I took my Maslow apart a few months ago as the frame i built was warped and flexing too much to be accurate. I have rebuilt my Maslow with a much larger frame out of unistrut and 2x4 wood supports for the approx 3/4" plywood backer with 16 inches of skirting all the way around the work area, but have not finished getting the chain guides installed. I also purchased more chain, but have not added it yet as my top beam is now 12 foot long. I am using the wood laser cut triangulation kit from ETSY which is very nice. I have also purchased a much higher current power supply, but not hooked it up yet. If I manage to get time soon I will finish the assembly and test it out. Wish me luck, i tend to take on too many projects at once. 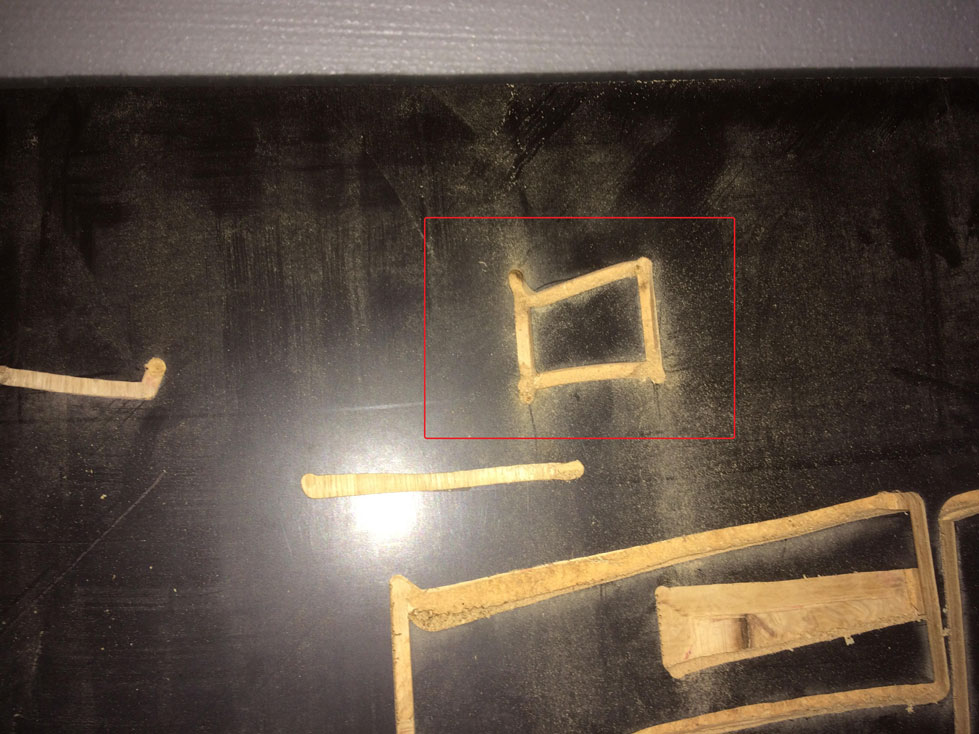 And here is the cut at lower area, which went well: 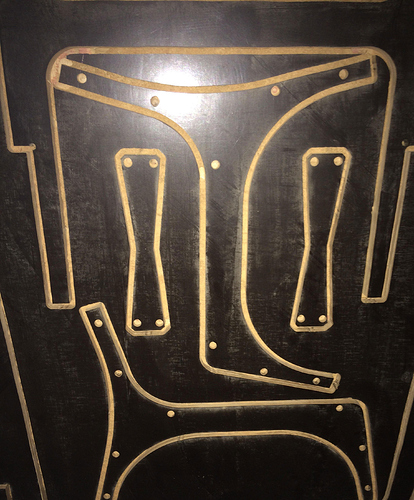 Hmmm so we’ve eliminated the extension cable as the issue.

Is the motor spacing around 3000mm? Is there anything else that could be different?

Its 2974, I feel like the problem is in the motors, if I remove the sled and just move, the chain move normal no visual delay with any chain, also the right upper corner doesn’t have this problem, I haven’t tested the left upper corner yet. It is possible that at top position the tension on motors are stronger, so one of motor doesn’t have enough power. But that means I must re-work the sled or motor mounting, because I did a bad work with them.

I agree. The issue is absolutely the motors not having enough power to move the sled at full speed.

I’m still a little stumped, but in the interest of starting to eliminate variables can I send you a new motor controller? Since it’s only the left motor it doesn’t seem like a power supply issue, and I would be shocked if the motor itself was less powerful some how. The controller board seems like the first thing to try to me.

Straight line curves down at top of the sheet (solved) Troubleshooting

it the same, because when I manually test the cut, it doesn’t matter which way I move, right or left or left to right, the left motor seem to delay then compensate it delay at the end.