I have been doing more of round curves and complex shapes than straight lines.
Now that I’ve tried to make long pieces 450x50 mm, I noticed the lines don’t come out straight. They actually look like a very stretched sinusoidal.

I checked the Gcode and there are pure “y” movements of 430 mm on this part, for instance, and my question is: does the firmware make a “point to point” trajectory for such a long line or does it interpolate dividing in small lines?
Do I have a way to control this (interpolation length), when I generate gcode in Fusion360?

450mm is not very long so surprised to hear of the line not being straight. Perhaps you are cutting near the edge of the sheet where tolderances are not as good. photo would help.

If that is in the gcode, then I would not try to change anything in the CAD.
Is this at the top of the sheet?
Did you play with the simulator to see what machine values create a curved line and did you compare the calibration measurements with hand ones?

Perhaps you are cutting near the edge of the sheet

Not really near the edge. I was cutting a piece of 400x800 mm plywood positioned vertically and centered horizontally, so always less than 200 mm from the vertical center line and bellow the horizontal center line.

It’s not really a curved line that I’m getting. It’s a kind of a sine wave of about 1 mm of amplitude. 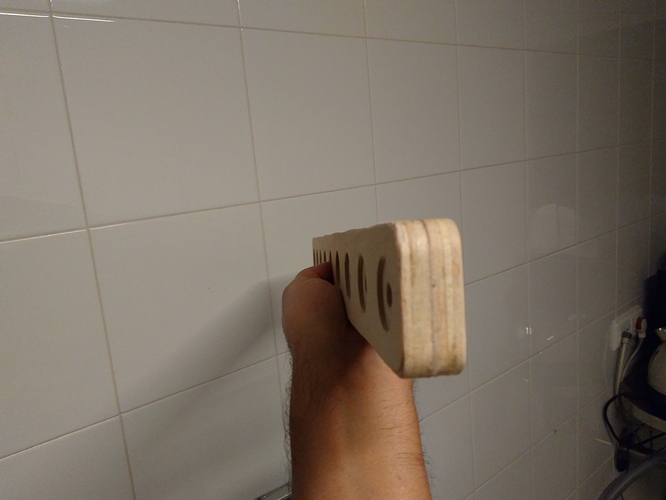 That can be friction on the sled or paint bumps on the ring kit, or so.
For that wave I would expect that its visible to the eye during the cut.
Edit: A unbalanced sled can also cause such thing if it keeps tipping.

Is the straight line made out of segments, or is it one 430mm move?

I’ve seen that with my ring kit. Can it be sanded out?

It’s a straight line. I don’t think this would happen with small segments. I’ve never seen these irregularities with curves, maybe because they are interpolated with tiny lines

so it’s making one long move, but checking if it’s in the right place
frequently.

Can you get a video of the machine cutting, that may give us a clue about what’s
happening.

That looks like exactly what I’ve seen from the carriage sticking on the ring
kit. While you are cutting, I’ll bet that you see the carriage moving in short
jerks rather than smoothly.

some people have sanded the inner surface of the ring to help with this, but
this is one of the drawbacks of ring approach compared to the linkage approach.

In that case I would say it’s something mechanical

I’m actually not using a ring but a linkage set with metal arms.
I’ll check the pivot points for excessive play and friction. The arms of the linkage do jump every now and then when they need to adjust for the angle of the chains, and don’t make a continuous movement so probably a similar effect than that of the ring.

try loosening the bolts just a smidge if the arms are moving in jerks.