What does everyone use for editing SVG files? I have an SVG file, but it needs a few curved lines added before Makercam will be able to identify the regions I want to cut.

Or software to convert a picture to an SVG. I tried Inkscape without luck.

I use inkscape. What part didn’t work for you?

I loaded an image file and tried the trace bitmap (or called something like that). Nothing even showed up in the live preview.

I took a screenshot of webcontrol and pasted it into a blank inkscape window: 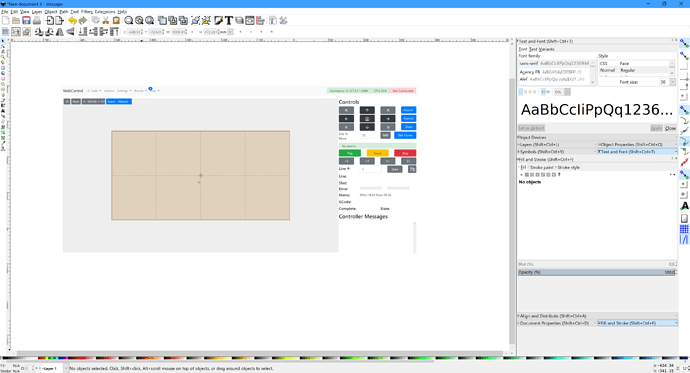 to trace part of it, I select it and use the path-> bitmap trace and just like you, I see nothing in the preview panel. I typically trace in corel draw, which is what I use for laser cutting. Inkscape should work though… 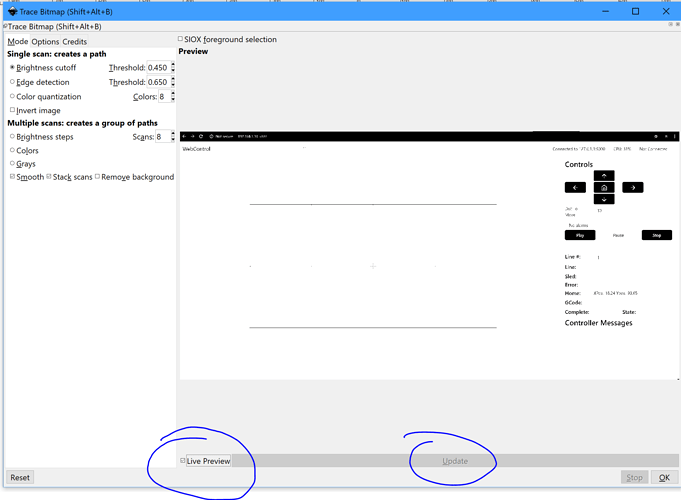 The easiest free solution I have found is Easel. http://easel.inventables.com

Easel can also generate gcode that works well with my Maslow.

that sounds like a reasonable option. I generate gcode in inkscape.

I clicked the live preview, but nothing shows.

I played around with that a while ago, but not a lot. Can that edit the SVG file?

As a side note, Easel has a decent image tracer as well that I use for making yard art that produces a SVG from a bitmap or png (probably other formats as well). And, it allows you to export a SVG if you want to save your work offline or use it with another editor.

Thanks. I’ll give both of those a try.

I use Inkscape. Lots and lots of online video tutorials for many of the things we’d want to do.

What type of image did you try to trace? (file type) Also, once you imported it, did you select it before trying to trace it? There should be the resizing icons on the corners when it is selected.

I’m not trying to insult your intelligence, but I often forget to select images when I am tracing multiple things.

It was a PNG file. I went back into Inkscape today and was able to get it to trace. Not sure what I did differently, but it worked.

I also started trying Easel. I haven’t cut anything with it, but so far really like it. Very simple to use. I tried it after makercam crashed multiple times. I guess makercam is only for simple shapes or small number of toolpaths.

I found https://vectr.com/ recently and have been impressed. I’ve been using it to create SVG icons and test SVG exports from Kiri.

Slim chance but I know what may have been the issue. If you don’t select the image before you hit trace or turn on live preview, trace bitmap has nothing to work on so it just sits there. Also, after you do get a good trace, you will need to re-select the original image to trace it again, usually after deleting the new paths you just generated. Works the same with a lot of scripts like Gcode from paths for example; you must have something selected for the script to work on. Hope that helps.

@garrett1812 you might enjoy looking at Kir:Moto( https://www.thingiverse.com/apps/kirimoto ). I found it pretty easy to use. I’m about to design something which will have inlay so I’ll be using F-Engrave for the inlay and Kiri for the overall toolpath generation.