Take This Poll! Which OS and GC/WC Do You Use?

What software do you primarily, currently use to control your Maslow CNC?

What software do you intend to use in the future to control your Maslow CNC?

What Operating System do you primarily use to control your Maslow CNC?

till tomorrow at 8 AM…

@Gero
Somehow discourse must have a preference too 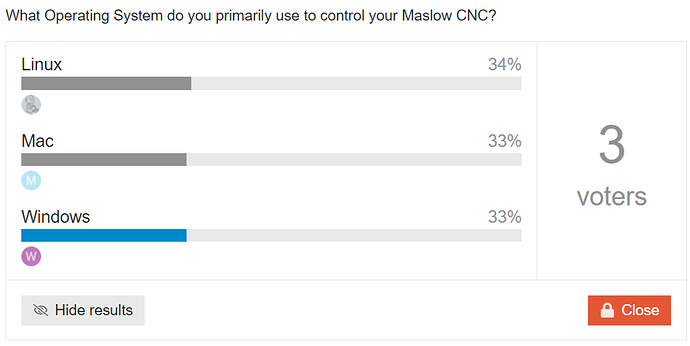 I’ve actually paused my work with the maslow until either WC gets support for holey calibration or I figure out the problem with getting it to run reliably (probably a dependency problem, I solved one such problem last week)

Somehow discourse must have a preference too

Great idea for the poll. I think it says a lot that most people are using Ground Control, but want to be using Web Ground Control. That seems like the future, but maybe it isn’t quite easy enough to set up yet.

Looks like a windows based web control would be great

There seems to be some confusion about what exactly “web based ground control” is. It is already platform independent as it turns the UI in to a web service rather than a local application. So you can access it with any modern browser.

On the backend, hosting/server side the hope was to containerize it which means rolling up all the dependencies etc in to a single slick install that you can add to your system with a few commands and update just as easily.

The host operating system that runs the relevant container will likely be linux to avoid supporting multiple OS platforms as that cross platform back end support has sapped a lot of energy that could otherwise move the GC platform forward.

That being said, the VirtualBox virtualization platform is free for non-commercial use and allows you to run a virtual instance of Linux on a windows or MacOS based PC and then within that you can run the container. If you’re not familiar with virtualization, think of it as an entire virtual PC (BIOS, hard drive, video, network, USB, everything) running as an application inside your main PC.

Alternatively, for heavier users, I believe the desire is to target the RaspberryPi as a dedicated web server/host running the WGC container. This means you don’t need to leave your full spec PC on all the time and can use a $35 Pi over ethernet or wifi and leave it next to the Maslow all the time and access it from any device.

Hosting on a Pi also opens the door for extra monitoring via a camera (the Pi has an affordable HD camera option) and other GPIO controls perhaps, open to the imagination on how to embrace and extend from there. The nice thing about targeting a Pi is it is a fixed hardware environment so it removes a lot of the variability and “my setup is unique because…” complexity of supporting things. The virtual machines help a long way in abstracting it but it’s still a bit more work.

Thanks for the detailed explanation, Jeff!
Does the containerized solution exist already? I can imagine that a VM has a few issues with peripherals like the Arduino and motor shield.
On the other hand, having a self-contained Pi based solution that is nicely tailored is good, too.

Can I unvote and try again? Accidentally hit Mac instead of windows on the phones touchscreen. These hooves aren’t made for clicking

These hooves aren’t made for clicking

I don’t think so but I can take a look.

There seems to be some confusion

I’m not so sure about that. Have you read all madgrizzle’s topic, especially recent comments?

Although the fruity boxen could use the help. Wonder if a Chromebook or android tablet would run web control, they’re getting cheap enough to just epoxy one to the top of the frame

It’s not containerized yet, at least not formally. I think someone was playing around with it. It certainly can be containerized.

I can’t comment specifically on the Arduino etc but I can say that Virtualbox successfully allows you to pass selected USB devices through (as in your pick which ones) to the virtual machine. I’ve done it with video capture devices before, and they show up as if native to the linux host.

I didn’t mean I was confused, I meant it wasn’t necessarily obvious to non-web platform folks exactly what was meant, so I tried to break it all down above.

It’s not containerized yet, at least not formally. I think someone was playing around with it. It certainly can be containerized.

It’s not a virtual machine like virtualbox but it is containerized using Docker. But only a RPi container has been developed but there’s nothing stopping a windows or macos container from being developed, other than time and energy.