after working really well for the last couple of projects, the locking tab on my router did finally cam out and popped the notch while being under load from the bungee cord:

I had planned to redesign the z-axis quite a while ago, based on The Meticulous Z-Axis, even bought the parts but for some reason I never really felt like starting the build… now the machine kinda forced me into it. Not my preferred way of motivating myself but hey, what can you do…

I was able to get my hands on a couple of fancy-dancy parts for cheap; now I’d like to see how they are going to perform. 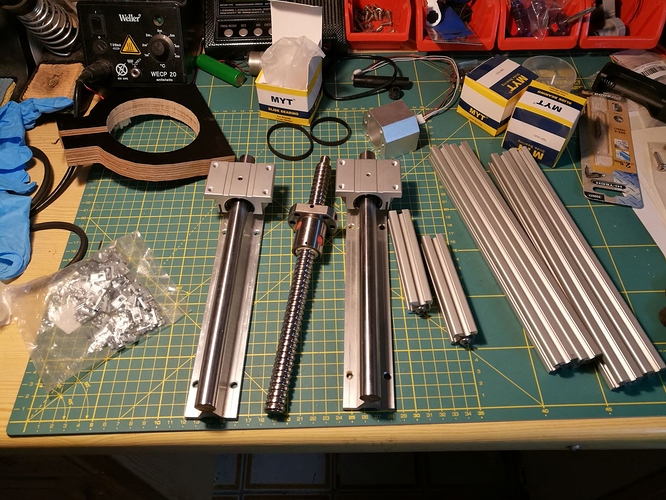 The main difference will be the linear rail - instead of having plain rods ‘flapping in the breeze’, I’ll use some sturdy 16mm supported rail with TBR16UU bearing blocks.

A 16mm ball screw plus SFU1605 ball screw nut will help to minimize backlash, so it’ll be goodbye bungee cord!

Everything will mount to 20x20mm aluminum extrusions I had left from an earlier project. They happen to be exactly the size I need for the linear rails!

I’ll keep the original motor - with a higher pitch than the thread on the router it’ll be a bit faster without having to change anything else (apart form the value in the SW, obviously).

spend $20 on some pullies and belt to speed up the original 12rpm motor. people have been running 100rpm motors fine about 8x faster

@aluminumwelder Thanks, good point!
Belts are already on the table, will have a look into pullies.

…pullies and belt to speed up the original 12rpm motor…

Any chance you could post a pic of your Z-motor mount?

The Lego part of the assembly is nearly over. Now I need to cobble together bearing holder, motor mount et cetera.

Note that I’m planning to keep the router base - worst case, it’s the perfect centering jig before adding a second, lower clamp.
Best case, I’ll run it like this and keep the cooling airflow through the motor.

As far as I’ve seen, my 8mm router bits are long enough to compensate the additional 21mm of ‘lift’ created by the upper clamp. 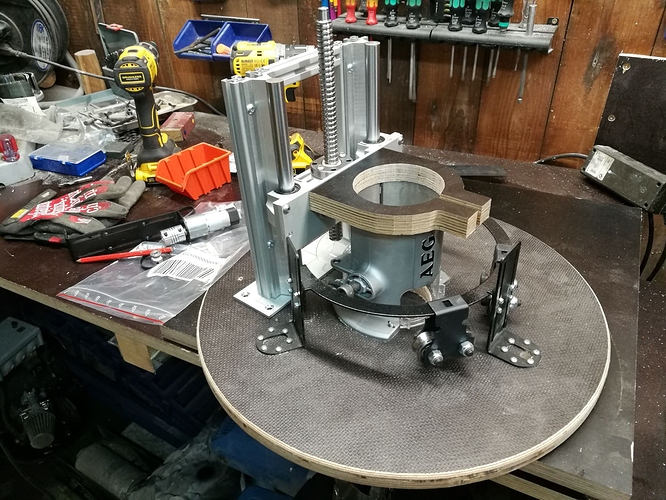 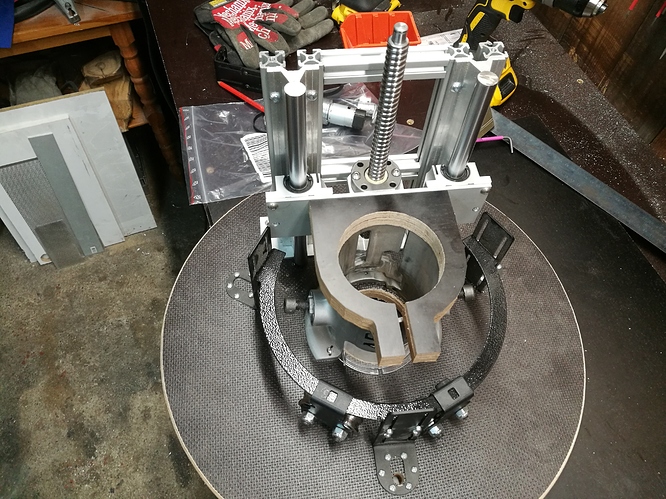 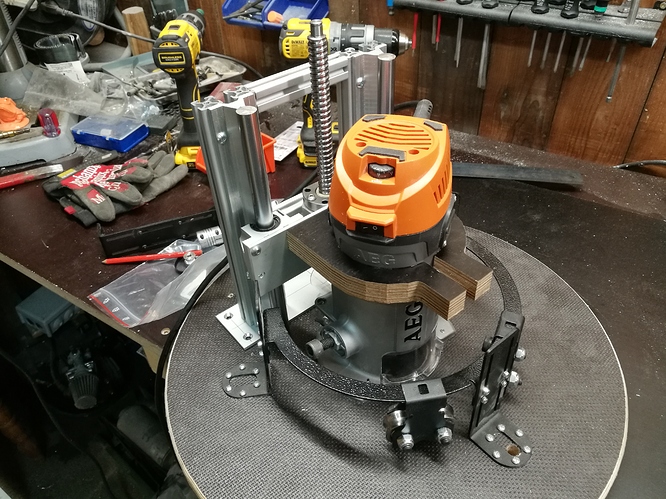 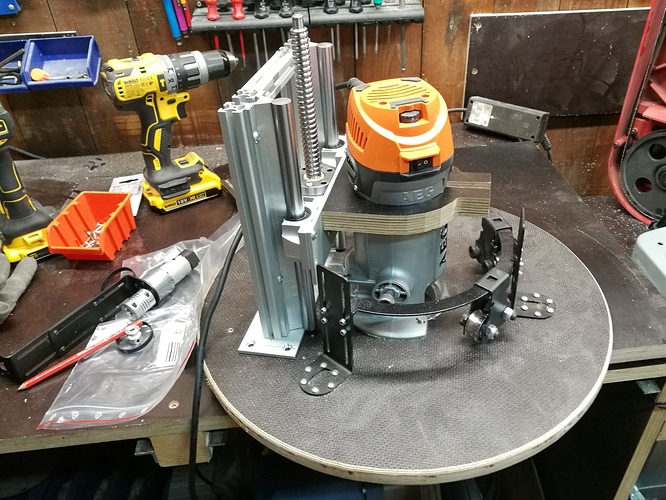 Aaand it’s done, sort of…
Admittedly, I’ve taken some shortcuts and omitted the belt for now.
The lower end of the spindle is held by a highly temporary hand-crafted plywood bearing holder and the motor mount is a bit wobbly but: The machine is no longer down!

It’ll be a lot easier to machine proper parts now and improve it step by step. 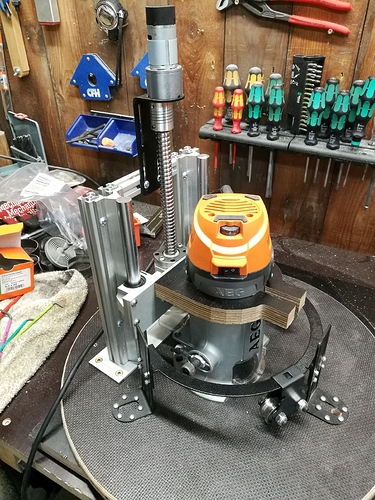 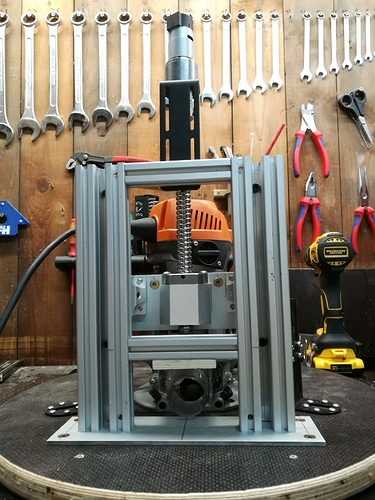 I hear you asking “Is there a build video?”
Why yes, there is:

The rails and screw are 300mm, correct?

I don’t see a new motor coupler from the Maslow kit? The machined end of the new16mm screw is the same dia. as the Rigid screw? If so is that pure luck are is there a standard. If I buy a screw on ebay what are the chances that it will work with that coupler? They don’t seem to tell you the diameter of the machined end of the screw on ebay or amazon.

@fshanno rails and screw are 250mm; 300 would give you even more range but be aware that you are moving the COG more and more away from the sled base.
The coupler is from my z-axis kit. However, I seem to have chosen an imperial size and needed to machine the inner diameter to 10mm to fit the Rigid screw in the first place. It was THEN pure luck that the machined end of the spindle was also 10mm.

But even if it doesn’t say so right away, any reasonable seller should be able to tell you the measurements of the stuff they sell - I’d just contact them before buying blindly.

After a couple of months I took the time to modify the z-axis again. Everything worked really well but the limited z-range (due to the router base) did not go well with guitar-building material thicknesses.

That’s why I removed the Ridgid base and added a bottom ring. Now the collet can go right through the sled and nearly touches the work surface 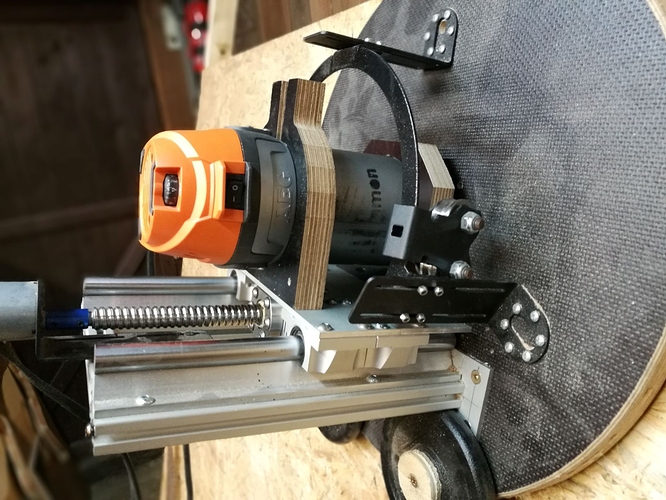 You should post a parts list and dxf /svg files for the parts love how you put that together excellent build, maslow should add it for the rigid router as a z axis upgrade kit.