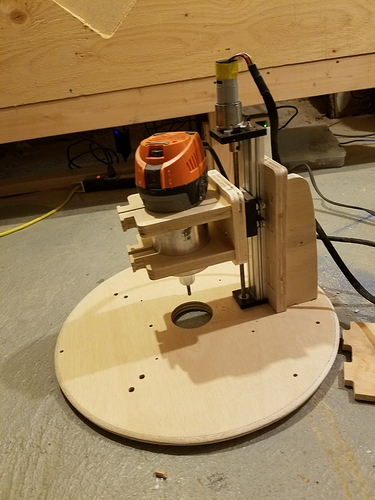 I finally received the $50 rail slider and was able to design a small footprint z-axis that fits within the footprint of the original sled design. I also added both kinematics
hole patterns to the sled for easier testing.Sled R3 upgrade.dxf (403.9 KB)

How does it feel when you wiggle it, is it stiff or is there play?

Solid as a rock (I was surprised). Here is the Z stage https://goo.gl/nPQnTJ the rating is 56kg and 15kg which is more then enough to support the load. Only mistake is that I went a little overboard with the z length. Should have gotten a 100mm instead of a 200mm, tones of extra thread.

That’s impressive. Did you have to find a thread pitch that matched the router z-axis threads or is this something that is entered during calibration?

There is a spot in ground control to set up thread pitch.

Looks like you removed the included step motor and replaced it with the standard z-axis Maslow motor? If so, was it easy to remove and install the Maslow motor?

I had to modify a nema 17 steper motor adapter from spark fun and buy a new coupler plus a few trips to the hardware store to fine tiny nuts and bolts. Basically $20 in hardware on top of the Z-axis.

Aah crap, i was thinking to buy that one, but it looked too big, and there weren’t any measurements on the aliexpress. I went with just an acme screw and 2 guides.

I use a similar actuator (sold by OpenBuilds) as the Z-axis on my little CNC router. The little wheels and narrow spread between them on the plate limit the stability, I can see mine deflect under load.

I made a larger plate and put 6 larger wheels on the outside, that has all but eliminated the deflection.

Based on my experience with some inexpensive imported 3D printer kits, I would question the quality of the Ali Express version vs the “genuine” openbuilds parts.

Yes i can see that… i need a plate for the router mount anyway. Going to use a makita rt0700 so i can put some bearings on the outside to…Thanks…

Getting this motor mount.
https://www.aliexpress.com/item/higher-quality-65mm-spindle-clamp-for-CNC-Router-spindle-motor-mount-bracket-65mm-Adjustable-clamps-one/32656571038.html

Is the advantage of this type of z axis so you have more router choices, or something else?

The more traditional Z-Axis is much more precise than using the Rigid router’s base. The router base has a fair amount of backlash in it and I’ve seen it drift as much as 3/16" from what it should be. Using a bungee to preload helps, but its still not nearly as accurate as it would be with a lead screw, or even better, a ball screw.

It also has the added bonus of giving the operator the choice of different routers/spindles.

I’ll point out that the rigid uses a lead screw, but it uses a very sloppy
plastic nut, and instead of rails/bearings it’s using the body of the router and
the base, which were not designed for this.

My ridged holder was really bad. I’d get complete moves where nothing was cut, then it would dive 1/2 inch or more and trash my bit. The Z axis is a little bit of a pain to build but, I can dive .1mm accurately. For me it was well worth the upgrade.

I’ll point out that the rigid uses a lead screw, but it uses a very sloppy
plastic nut, and instead of rails/bearings it’s using the body of the router and
the base, which were not designed for this.

You are correct, sir! It’s not in the slightest designed for this use. Thank you for the point of clarification, though. It could be confusing how one leadscrew is suitable for the job while another one is barely passable.

My ridged holder was really bad. I’d get complete moves where nothing was cut, then it would dive 1/2 inch or more and trash my bit. The Z axis is a little bit of a pain to build but, I can dive .1mm accurately. For me it was well worth the upgrade.

I remembered hearing some of your issues with the old base. Glad to see you’ve got a proper fix for that issue! I think this style of Z-Axis is going to be a great upgrade over the base. I hate my base, myself. It’s slow and very inaccurate. I have to clean up a lot of my dadoes with a chisel after cutting with the current setup. And that’s when it doesn’t bind on itself and pop out of the damn tab. I have the programs ready to go to cut my new Z-Axis, all I have to do is find the time to run them xD

I think I’ve posted all of the files I created to build this thing. But if you need anything let me know.

Something like this from openbuilds https://openbuildspartstore.com/c-beam-linear-actuator-bundle/ seems would work good for this with your wood parts. Short version has 150mm of travel. A little pricey though.

So I am starting to have thoughts that I may need to cancel my z-axis upgrade and just build something like this for the long term.

Did you swap out the stepper because you needed more torque, or just because the software already has support for it?

The maslow hardware and software has no support for a stepper.