While I’m certainly not an “intimidated” user, and have no problem being told, “You’re an idiot!”, I’m putting this in the “No Judgement” category because I have found that when you have a crazy idea you should play with the idea before you judge it. So here’s my latest crazy idea.

Mount the router like the print head of a delta-type 3D printer. This would allow the router to be moved in all sorts of directions, including ones where the bit is no longer strictly vertical. This could turn a Maslow into a 4-1/2-axis machine!

The mechanisms and support rods would need to be robust, to say the least. I think the major issue to such an arrangement would be dealing with the router being on a flexible mounting during sled movement, it would likely want to flex out of center. And you’d need to move to a smaller form factor spindle, otherwise the delta assembly would likely take up the whole sled to accommodate the mass of the router.

edit: You might be able to invert the standard delta arrangement, and mount the router pointing “up” out of the V, to minimize actual structural needs, but flex and router mass would still be issues to overcome. You’d also probably want to drive the height adjustment with screws instead of belts. I’m at work, and by no means up on the engineering, but here’s a sketch on a post it note to illustrate: 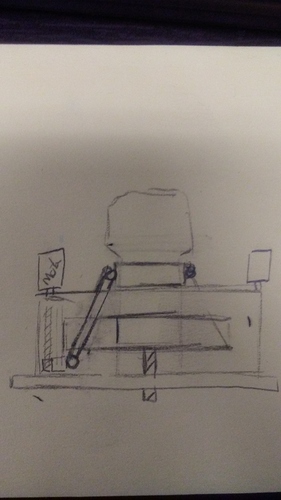 This would be a matter of torque. There is no reason mechanically it can’t be achieved. @dlang What are your thoughts on this?

On second thought, inverting the assembly would be a bad idea if the goal as to gain control over the angle of the bit. You’d want the point of tilt to be as close to the spindle end of the router as possible, to minimize the amount of X, Y and Z shift at the cutting surface as a part of the angle change. You could still do it inverted, and it would add less material to the sled for a given amount of angular pitch, but there would need to be (more) compensation in the software, and you’d run more risk of hitting the router body on the work surface at the extreme ends.

Edit # I do this a lot: My little doodle up there isn’t really right, the arm would need to mount somewhere on the middle of the adjustment screw when at 0 angle deflection, to give room for the armature mount to shift down during angle changes.

I was originally thinking of something like this, although the degrees of freedom to allow the router to tilt might be hard to accomodate. 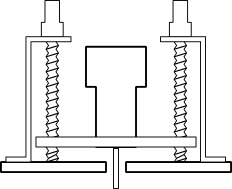 Might be easier to put the router on a linear slide, then figure out how to tilt that assembly in two axes.

It might be easier still to mount the Z axis on a bracket that lets it tilt on a limited arc, like from 75 to 90 degees relative to the work surface and mount that to a plate that rotates.

edit 12/28/18 (now with additional post-it doodles): I think actually that the Delta style adjustment might have the best shot. A Linkage kit would be required, or a larger ring kit to accommodate the larger axis needs. I’d do three adjustment screw assemblies, with the drive motor connected via belt to the base of the screw, to cut down on assembly height. From the adjustment screws I’d have the Y shaped arm with the single connection as a ball on the adjustment side, and the two connection side as captive ball joints attached to the router collar as close to the bottom of the body as possible. Running the adjustment motors alongside the adjustment assemblies would give you the most freedom in arranging the sled, and save as much height to allow for the most range of motion.

another edit: Figuring out all the relational lengths of the arms, adjustment screws, and the radius the adjustment assemblies would need to be mounted to is the part I have nowhere to start on. I’d probably start with the goal being to move the stock Ridgid router, and flex it 15 degrees or so. 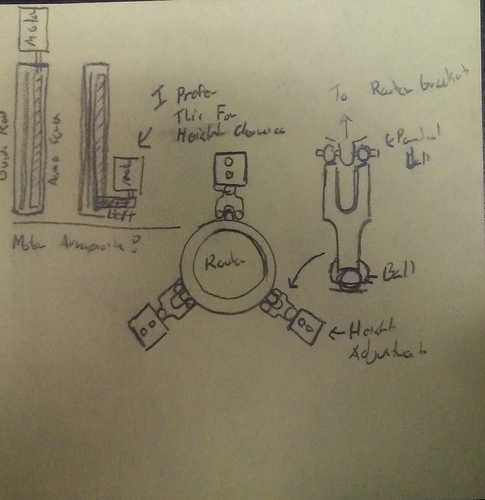 I’m not sure what the benefit is over a linear rail type approach.

If you are trying to tilt it, you are adding a lot of complexity, and I’m not
sure what CAD/CAM software you are going to find that will take advantage of it.

It would take different electronics to drive it as well as firmware to control
it.

a lot of things that would have to change, and I’m not seeing what you are
trying to gain from the change.

@dlang’s comment about finding software is particularly relevant. Adding tilt would allow more complex carving…if you can find/make the software to support it. The really fancy industrial machines have additional axes, but it’s hard to say what the hobbyist would do with the capability.