Just adding some testing to the pile.
The red chart paper behind the belt is cardiograph paper. 1mm per division.
Right end of cable was attached to floor, looped through test jig and weight hung the left side. Due to the cable path through the jig it rotated slightly during the test. Started with just the carriage weight about 3 lbs and added 10lbs of free weights at a time up to 250lbs plus carriage.
Carriage only.

according to the force spreadsheet located here https://docs.google.com/spreadsheets/d/1mv-sUyig7rTph58ell1ETJP32yo1pq4JgaVvp45PKqU/edit#gid=0

The range of force is about 3 to 33 so starting at 50 is already over the max most machine will use. can you please do the test again starting at 5 lbs with 10 lb increments?

I overlaid the 5 and 40 images and there is a 1.2mm difference between them as shown by green lines. 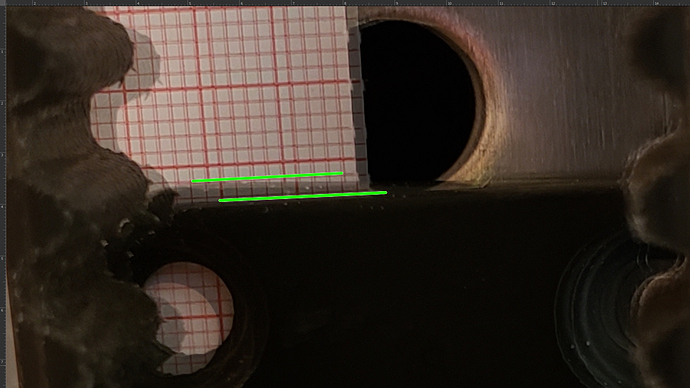 Cool. Actually the photo labeled 5lb here is the same image as Carriage only in the first post. I started the test thinking it was about 5lbs but found it to be lighter at the end of test, There is also some unaccounted for friction in the pulleys and cable bends,

Is the force being applied to one side of the belt, or both sides of the belt?

please note that these are the static forces, when you aren’t moving. Each motor
is rated to put out 66 pounds of force (30Kg)

it looks like both sides, the long shots seem to show the belt as a loop.

we would need to test a single piece, so that we don’t have the bending force of
the belt as a factor (how tightly it wraps around the pully)

If two pieces of belt share the load, each only sees half the force…

The belt is a 1600mm loop 20mm wide. There is a fixed 1" dia pin at the top and a movable 1" pin at the bottom. The force is acting on both halves of the loop at the same time but there is also mechanical advantage given the cable path. I figured this would be more accurate than clamping a single length because them there would be doubt about clamps slipping. If anyone can suggest a specific setup and sample of belt, I can give it a go.

I’m curious as to what the standard 2mm pitch belts do… do you happen to have any to test as well?

Even with a single strand, the bending around pulley is a factor. Here, there are 4 departures from a ‘pulley’. Actual setup may have 1, 2, or more depending on idlers, pinch rollers, etc. At least this way we can divide or multiply the measured stretch into portions that roughly match a given setup. When there is a specific setup to test, we can use actual hardware. Can you suggest a single strand test setup that doesn’t call into question slippage at attachment points?

I do not have any 2mm pitch belts on hand. If there is a kit with long belt, pulleys, and the specific end clamps you want to use, I can order that exact hardware. I’m sure I can always find some use for it afterward.
What exactly are you calling ‘standard’ 2mm pitch belts? What width, tooth profile, manufacturer, options, pulley type, pulley bore, pulley bore anti rotation(circumferential clamp, grub screw on flat, Woodruff key, hex shaft, shear pin). Often a given belt profile like GT2 is used with a similar, but not matching pulley profile like HTD. These are details we need to nail down in order to offer consistent performance unit to unit.
I have never met a ‘standard’ belt, but most frequently use 15mm wide, 5mm pitch Gates HTD belts with polycarbonate pulleys on aluminum 1/2" hex shafts. Such as https://www.vexrobotics.com/vexpro/motion/belts-and-pulleys Those I have on hand in short loops. I don’t think Maslow requires something that beefy,

I was referring to belts used in 3d printers. Maybe I should have said common… or commodity. Anyway… I’ve ordered 15mm gt2. Well find out how it performs in a few weeks (slow boat from China)

Sorry, I wasn’t trying to imply that size was good for Maslow. It is just what many First Robot Competition(FRC) teams standardize on so they can share parts at competitions. That is the only reason I have it. I was not aware that there is a common size used on 3D printers.
The school has a gantry CNC router, gantry CNC plasma cutter, and 2 desktop 3D printers all use different sized belts, so I assumed that It was like the wild west where everybody used something different as this tends to say https://reprap.org/wiki/Choosing_Belts_and_Pulleys.
However, new Googling seems to show 2mm pitch GT2 is common in the marketplace with 6mm width most common among those, but with various kinds of reinforcement, like fiberglass or metal. Would anyone care to recommend a specific variant? I’m wondering if there are options like 2 sided teeth that might damp oscillations or twist on long suspended spans like maslow.

I ended up getting polyurethane steel reinforced gt2 and some 36 tooth pulleys. If my understanding is correct, that should put me at 72mm/rev which is close to the maslows 63.5mm/rev . I couldn’t say if I made a good choice or not.

that’s probably a good place to start. The larger pulley’s will be affected less
by bending.

for the test, I would suggest anchoring the belt horizontally, letting it do a
90 degree wrap around the pulley to get to vertical (sort of a C shape on the
belt)

a common way to anchor the belt is to put it through a slot, doubling it back on
itself (so the teeth mesh) and then using zip ties to keep it tight.

If you are willing, try ordering some belts with different types of
reinforcement, we have no idea what the differences are going to be. It would be
really good to measure the cheap stuff as well as the expensive stuff.

you can either have the pulley’s fixed or rotating, I think the best match for
what we would probably do is one pulley fixed, 90 degree wrap, and the other end
no pulley, doubled over. measuring from <3 pounds of tension to >60 (possibly as
high as 150)

at the low end, there will probably be a lot of movement as the anchors and
pulley wrap settle out, then a period of linear stretch.

make some pen marks on the back of the belt (at least near each end) so we can
tell how they are moving.

twist should not be a concern, just stretch. longer sections of belts being
measured is probably better