Webcontrol timing out with M2

Hi
I have recently put together the new M2 from makermade.
This is my first Maslow but I am familiar with hobby CNC via my Shapeoko3.

I can get my M2 to operate via CNCj, however, I was hoping to use Webcontrol as it seems better for calibration (which I am having issues with).

When I try to connect to the M2 (Aruduino Due) it shows initial connected but then times out? 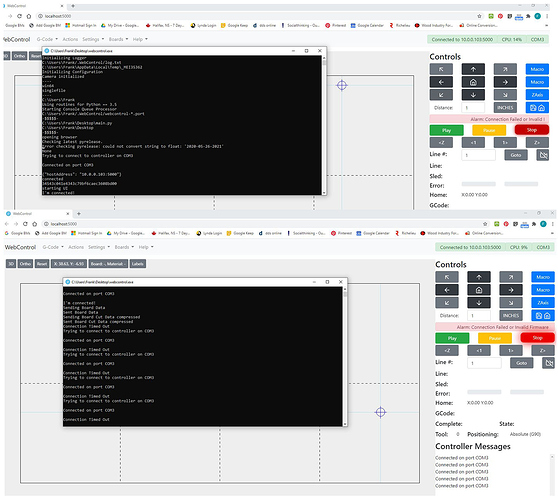 Can anyone tell me, does the M2/Arduino Due work with Webcontrol or does it have to be CNCjs only?

Hi @Frank_Soloman, Webcontrol is not yet ready for the Arduino Due as far as I know.
If there was a roadmap, my guess would be that it will get GRBL ready for the Mega first as there are far more users already.

We are building a Pi image this week that will let you use Makerverse over a web browser similar to the ground control Webcontrol.

Ok thanks for the info.
If I was set on using Webcontrol as is, would it be as simple as buying new electronics?
Wouldn’t the motors, etc all still work the same with the Arduino Mega instead?
I guess I’d have to somehow confirm that the motor wiring harnesses match the Mega pins.
I’d rather just switch out the Makermade electronics for what is more commonly used if that ultimately saves me calibration headaches. I need an accurate machine at as large a size as I can get and there just doesn’t seem to be any documentation on how to calibrate the M2 yet.

Wouldn’t the motors, etc all still work the same with the Arduino Mega instead?

My guess is yes, but I don’t know for sure if MM has twisted some wires. They should be coloured and run from one plug to the other without change in order. If you can confirm that, you are good to go with a Mega, but the motor-shield will not match (as for my little knowledge) , aim for a TLE 5206 (yes, end of life, but if you can use it for 20 years, who cares).

Thanks Gero
What do you mean “end of life”?

The ‘chip’ on the motor shield that drives the motors. It is not continued in production, so this shield is not going to be available for long. The TLE shied has a separate ‘chip’ for each motor, as compared to the original shied where the left motor and the z-axis have been on a ‘dual-chip’.

The origin of the Due approach has given all detail to calibrate, but not being someone to mess will PID, it’s up to MM to provide a user friendly dialling in to accuracy and before claiming ‘more accuracy?’.

Maslow CNC, second generation based on GRBL and Arduino Due - ldocull/MaslowDue

Yep the TLE5206 chips are hard to find. I’m ordering our last batch, then it’s time to move onto something new.

A very good hearted Friend has sent me a TLE9201 shield, did not try it yet, not even said thank you, different story. I did not check the EOL for this chip, might be worth looking into.

In my opinion, the best solution would be to integrate the Maslow’s kinematics model into the M2 firmware. It doesn’t really seem complicated and I think it would take less than a hour for someone to do. Holey calibration could be broken out of webcontrol as a separate script/application fairly easily as well (probably more than an hour of work though, unless you’re a real programmer that knows what you are doing) so that it could be run to generate the calibrated values to enter into the M2’s settings. More advanced work would involve a holey calibration plug-in for CNC.js… it’s certainly doable.

I do not have the design of the TLE9201 board. Looking at the ‘Commits on Aug 10, 2019’ in https://github.com/MaslowCNC/Firmware/compare/v1.26...master it is recognised by the Maslow Firmware v.1.26.
Can someone confirm that this change made it to the ‘Holey Firmware’ used by Webcontrol?
The advantage of the board seems to be ‘over current detection’ that is however not implement yet.
Quote:

Can someone confirm that this change made it to the ‘Holey Firmware’ used by Webcontrol?

I have answered this question by testing: 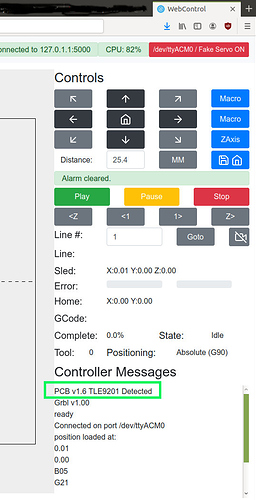 I’m currently working on the TLE9201 and waiting on a few boards to test on - just something to solder the ic’s on. I will post the design once finished.

I didn’t know the webcontrol firmware was supporting the 9201 already, I ordered the pcbs encoded as v1.6 but unfortunately I was working on the official firmware which returns -1 so I encoded them as 000111 also my pin out are complete different. Not a big issue since it’s just a prototype, on the final version I can match the webcontrol pinout.

I’m also testing a v1.5 which is a thru hole based on the TB6643, I like the thru hole because are easier for users to make their own. Other big advantage of the TB6643 is that can be properly cooled in contrast to the 9201 that I’m having hard time finding a heatsink. 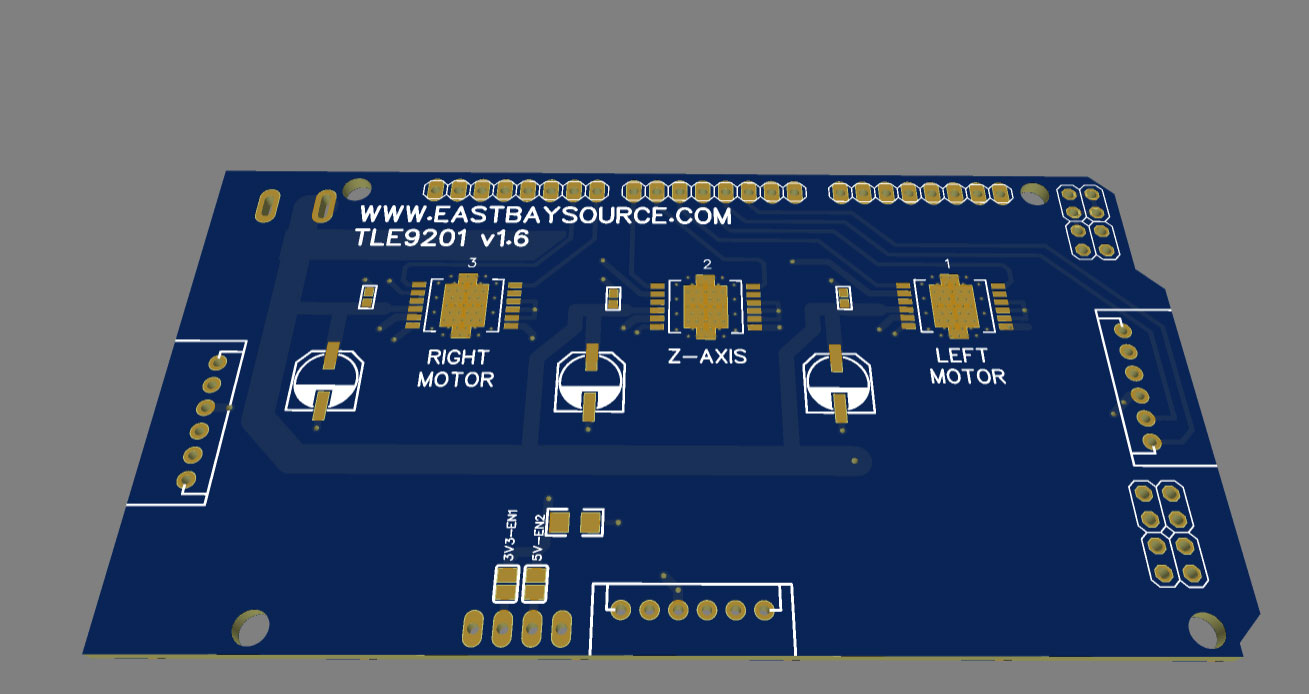 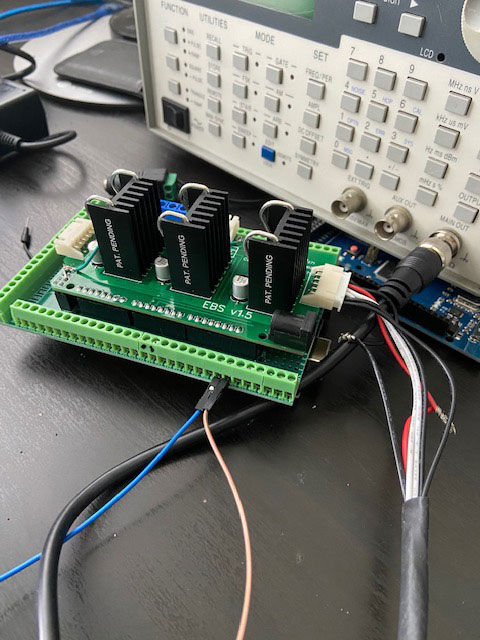 A regular piece of square aluminum tube could be used or traditional finned aluminum heat sink is an option.

9201 that I’m having hard time finding a heatsink.

I just happened to have a couple of this heatsinks collecting dust. They are slightly bigger then the chip, but I guess that’s fine. 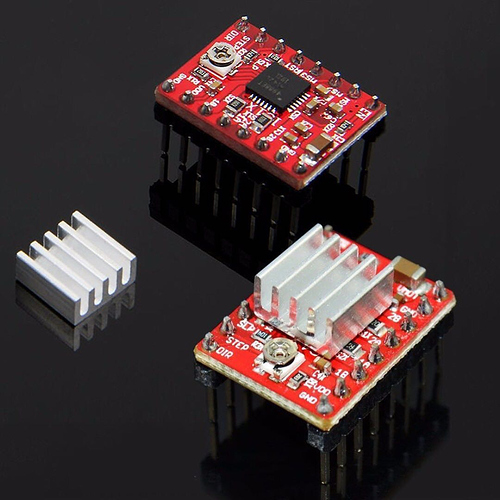 I didn’t know the webcontrol firmware was supporting the 9201 already,

I don’t think it matters to “webcontrol” (i.e., the web server part) the type of board connected, as long as the string returned is something parse-able. What matters, however, is that the firmware that included in webcontrol supports the 9201, and looking at that firmware it appears it does (not sure when/who added it… but cheers!)

Thanks for the idea, I have a few of those as well, but don’t like the glued on type, they tend to fall off, the chips can get very hot under the “right” circumstances

What matters, however, is that the firmware that included in webcontrol supports the 9201,

Sorry. That’s what i meant, i thought that firmware was from your repo and being downloaded by webcontrol users already (I’m new to github)