What can we do to encourage more people to post projects?

I know this forum is only a few days old, but even in the old forums there hadn’t been a ton of activity in the projects channel of late. We saw a bunch of awesome projects right after the beta testers put their machines together, but then things quieted down.

It seems like a lot of the Batch #1 and Batch #2 kits are probably coming together right now and people are looking at starting their first projects.

How can we encourage more people to post them? Can we create guide lines for conduct in the Projects channel to make it a more welcoming place to post projects?

Should we have a monthly contest or something similar where everyone designs something in a theme to win some sort of silly prize and bragging rights?

It’s a lot of fun to see what everyone is working on and I think we can all learn a lot from seeing each others success and failures.

Using myself as an expample, I think a number people are perhaps more in to building the Maslow itself, then putting together the “base model” (i.e., the way you meant it to be made) and cutting stuff. We are perhaps overly excited about neat sled ideas and different frames, we’ll get to cutting soon.

Also, many of us are probably weekend warriors, so there may be little shop time updates during the week. Heck, all I do is run a wood shop and I still am making slow progress. I really think your POD cut tease will spur some movement, seeing something really getting created.

That sounds fun, I understand C Swartzell’s comments, but I think that there is no expectation or pressure, it’s all for fun. I just as you Bar, want to see and share. My Vote is yes.

Oh, completely! I didn’t mean we should be focused on cool mods and such, just pointing out that maybe more than a few of us have gotten distracted early on, rather than testing what we’ve got.

I think something as simple as a “Posted Project of the Week” would help. A small prize wouldn’t hurt, but probably isn’t necessary.

I agree with @jwolter. I was mentioned in the weekly update once and that already felt like a great reward. I got rewarded twice, as my girlfriend was proud of me and that resulted in more allowance for Maslow

I know that I still have my MaslowCnc sitting in the box that came last week. I really really really want to put it together but life’s other priorities seem to have taken control. This summer I seem to be super busy and it looks like it will stay that way thru August. I got a ton of project ideas but I am afraid that they will have to wait more toward the fall/winter when there is more idle time. Of course part of me thinks that as I get the MaslowCNC together at a later date that other users that have more time during the summer will make improvements in hardware and software that will help me.

I’m in the same boat as Tom. We’re remodeling a 1930’s farmhouse and I expected to be moved in at the beginning of July but we’re just now putting flooring down… it may be September before I crack my box open. It’s maddening!

I think a “project of the week” (or perhaps month, considering the frequency of recent posts

) is a great idea. I also really like the idea of a prize; maybe combine the two so we have a 30 day window for people to submit projects, the community can judge them and the winner gets a coffee cup or something?

I got my Maslow box last Friday, and with making the temp sled/frame, and then working on the final sled/frame. As well as the learning curve of my first CNC, it has taken some time.

I think the recognition is a good idea, contests maybe once people are really up and running. Does the forum do “badge” type things, that a person could be rewarded? Fake internet points for all! (sorry I spend too much time on imgur).

At this point I’m the most thankful for the quick responses to questions and software issues that the forums and Github repositories/wiki have offered.

Once users get up and going, myself included, I think it would be neat to be able to list your projects on your user profile page as well. I would imagine this as having a cover picture for the project and a status such as idea, in progress, and completed.

Also, I like the idea of featured projects, but don’t feel that you need to stick to 1 a week.

Maybe a weekly contest. Best project posted gets sent some cutting bits. If we need proof you made it on a maslow have them have the maslow in the background of the picture.

I feel if you are going to submit projects all files required should have to be uploaded. I mean the point is to expand the open source project library right? Plus it helps to verify that it was made with the Maslow.

I kind of like JDogHerman’s idea of bits as prizes, though I feel maybe like a Maslow themed teeshirt would be a great way to expand user base. Since peopel would ask what it was about…

Yes, I think submissions should have a file of some sort associated with them. Or if they choose not to, we can decide as a community that they aren’t eligible for the prize.

…And we now have a “Project of the week” badge. I’ve temporarily granted myself the badge so you can see what it looks like.

Where’d you make that 8 bit sled? You had to make that. I don’t see the host having that in a stock package…
That would be dope on a teeshirt. Cutting out the M in a circle logo.

Nope, it was totally already there! Discourse is AWESOME!!!

Only joking. I ripped it off the Kickstarter campaign page. It’s the graphic under “Backer Rewards”. 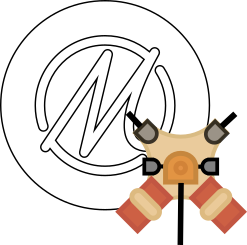 Exactly!!! The only thing I would change is to make the logo the light Purple and White. That way it’s good to print on any color shirt.

Good point. The OCD part of me couldn’t stand the chains ending in the frame, so I extended them and moved the sled a bit. 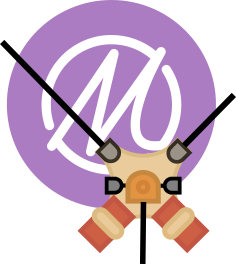 Can I have the High Resolution Image please? Can’t wait for my reward T-Shirt, so will have my own made

Initially, the question was how to get more projects posted. The best thing I have seen is to get people to post projects, big AND small. Made for the shop, or furniture or useful or just plain fun. Post just about everything and if you can offer dimensions and optionally plans (free is best, paid is OK for great plans!)

The 3D printing community started with a good thing like Thingiverse and others have cropped up.

If you have ever looked into the http://www.talkshopbot.com/forum/forum.php you will find a great and supportive community. They will welcome you, but be warned, some are avid SHOPBOT ONLY types, so keep your mouth shut
as some don’t take well to ‘intruders’. Support them and view their stuff as a great and historical resource base. The MaslowCNC won’t do some things as well as the ShopBot, but it has other strengths.

Keep most of your questions here, especially related to CNC and MaslowCNC specific.

Be noted that most Shopbot owners do not use G-code, they use a proprietary code developed over time by and for Shopbot. So don’t expect to use their projects directly here. They are still great inspiration!

Shopbot software can use and generate g-code, but from my understanding it is still primitive compared to the code the shopbot software does natively.