The problem is, i need a large pocket 36cm x36cm 6mm depth to clear.
I made some nice cuts with the maslow presision and accuracy is ok.
The wood starts curling up when parallel cuts ar perpendicular to the grain of the wood, the curl gets bigger and bigger. what makes that the boards start flying of the top and the depth is not correct anymore.

I’m going to trie a pocket operation with a toolpath parallel to the grain in a zig zag motion.

Added one picture of a good cut. to illustrate everything works. It’s the first cut thats not ok, not due to user error

Any hints are welcome 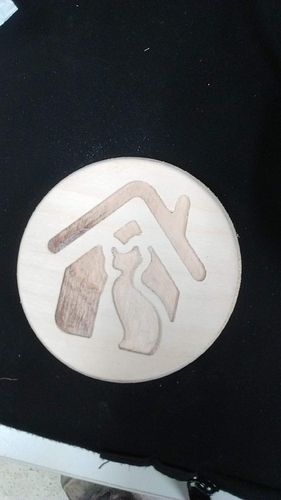 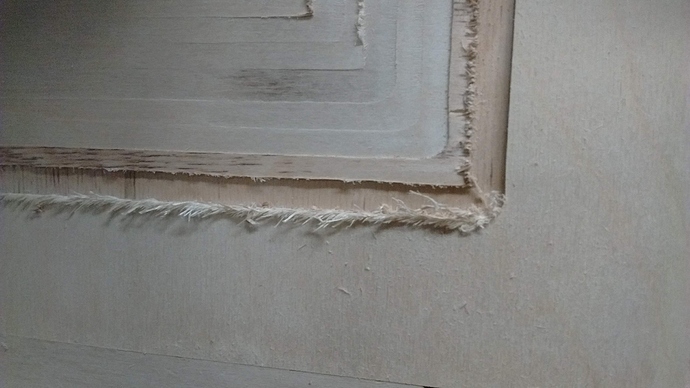 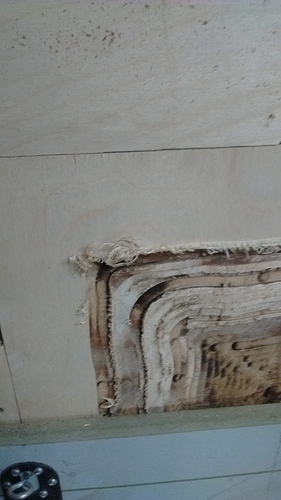 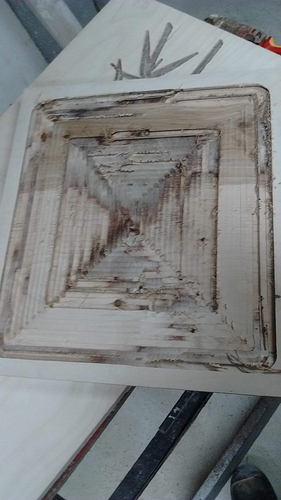 you can try a downcut bit or you can try putting plastic trim around the edge of your sled so that when it is cutting over the work piece it will not be lifted up in the center from the wood splinters sticking up.

I have noticed the duller the bit is the more strings I get when cutting. Also does it do the same when you change the direction of the router? climb milling vs conventional milling (set in Fusion 360)

@ OtandAT The bit was new. What do you use for feed speed?
I have to test the climb milling , but i read climb milling is no good for nto to rigid machines, the maslow is far from rigid.
But ill try.

I set the X/Y to 500 mm/ min and the Z to 600. I usually only cut 4 mm a pass. Most of burning I used to get was from too slow of a Z axis movement. I have tried both directions and both have worked for me but then most of my cuts have been in the middle. Jon

Ok, thx for the info.

My ‘fix’
I used a 20mm bit 2 straigth cutting edges for the large pocket, that makes that the beard is cut every time and the beard is max 1 pass high witch is not really an issue.

Followed by a finishing pass.
Due to the size i added an island in the middle of 6mm diameter to give continues support to the sled.

This looks like bad z-axis movement rather then sled tilting to me as the bottom of all cuts look parallel to surface and each other.

Do you have the automatic z-axis kit installed? If so have you done the Cheap z-axis fix with the bushing and washer? I have found that this made a HUGE difference in evenness of pocket cuts. Also adding bungee to z-axis to add a bit of down force helps.

Just for clarification, if you are talking about a 20 mm bit width at 750 mm/min that would be a factor of about X4 times the material removed that I’m used to. Have you tried a slower rate?

you may want to try some single-flute bits, they are more suited to the high spindle speed and low feedrate combination of the Maslow.

the horrible tear-out at the edge is a typical sign of a dull bit, it’s tearing at the wood instead of cutting the fibers. Bits dull quickly when they get hot.

@OtandAT, I’ve been saying for a long time that Bar has been very timid in his cuts, and everyone else has followed his lead. We’ve done some test cuts showing the machine cutting 3/4" deep x 1/2" wide (or slightly wider) in a single pass, and the cut quality was pretty good, but nobody has really dug into this to test different options.

Well I have to say I’m impressed. I’ve been using various routers bits and jigs for decades and I have to say cutting a full 3/4 inch by 1/2 wide in a single pass usually results in; broken bits, lots of smoke, interesting bit chatter and tear out, or very limited router bearing life or a combo of the former points. What were these bits and what was the feed rate?

remember, the max feed rate of the maslow is still very slow.

I’m not saying it’s a good practice to try and cut that deep, and at makerfaire
when he put in a 5/8" single flute bit, it produced real chips that the dust
collector didn’t pull out.

I’m justsayinhthat cutting 0.2" per pass with a 1/4" bit is not anywhere close
to the capacityof these machines.

@tinker I have the bungy and the washer. I have cuts that the Z is perfect, but not always feed rate was 750 most of the times.

@OtandAT The cut came out ok, only the bottom Z is not perfect, it needs a cleaning run at constant depth.
This will be my default speed and settings for this kind operation, the pocket is filed later on so the not so smooth finish is not an issue.

Glad it’s working. There is a compression bit as well that may limit the thread production. I have a couple but have not used them as I cut very shallow (however I think I will now try it with a deeper cut test). I also tried the bungee method but gave up and rebuilt my Z axis. Now it has a lot more precision and a faster plunge rate. I posted a link to a video about it in the Z-Axis upgrade consolidation section. Jon

That video is impressive, although testing the envelope has risks as he stated. I started off just with a slower feed rate working on precision as my main goal and have been happy with the outcomes. That being said I have some compression bits I’ve never used due to my shallow cutting depth so I’ll take you counsel and try some deeper cuts and see. I do believe precision and production have an inverse relationship, but there must be a happy overlap somewhere. Jon

looking at the burning and stringing etc I would say you have the feed speed and spindle speed set wrong. slow down both and ensure the bit is good. going too fast will overheat the bit and dull it extremely fast