Sooooooooooo… My Maslow is feeling great after a rough first week and we got our first project done! (and we’re finally able to post here

) As a first project I decided to cut my workshop’s logo and in the process decided to test the pocket feature while I was at it. It was cut in a 24" x 24" x 5/8" plywood, with a 1/4" upspiral bit. Feed rate was MakerCAM’s default (60), pocket .200" deep and every pass was also .200" (final one .075" for a targeted depth of .675"). Router speed around 16k and overall time was around 2 hours or so. Overall the process was really encouraging and now that I got my first project done I can slow down and improve the machine. I’ll add details as I post the pictures.

Fresh out of the machine: 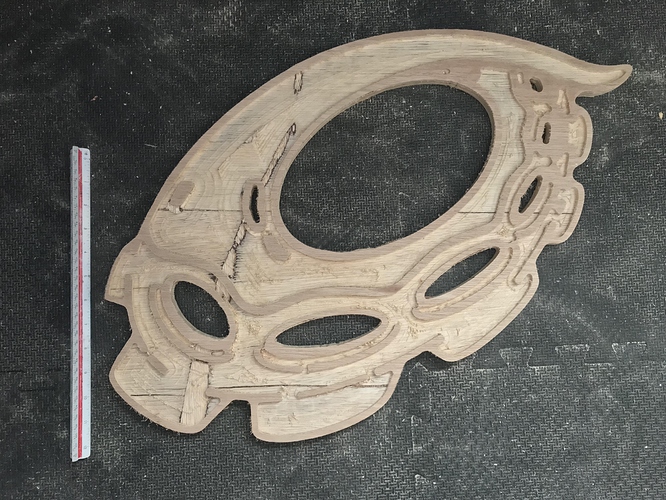 The machines accuracy was spot on but had trouble with the sled (currently riding the temp one) as it wobbled around and wasn’t able to stay still while cutting. Feed rate felt really fast so that should help, maybe a smaller step down helps too but the biggest thing will be getting the sled running how it should be. Right now the acrylic ring from the ridgid router is the only thing touching the panel/cutting surface, so increasing that surface area with the new sled should stabilize it a lot (probs the whole point of the final sled I haven’t done).

Here’s the piece after sanding and hand routing the parts the 1/4" bit couldnt cut: 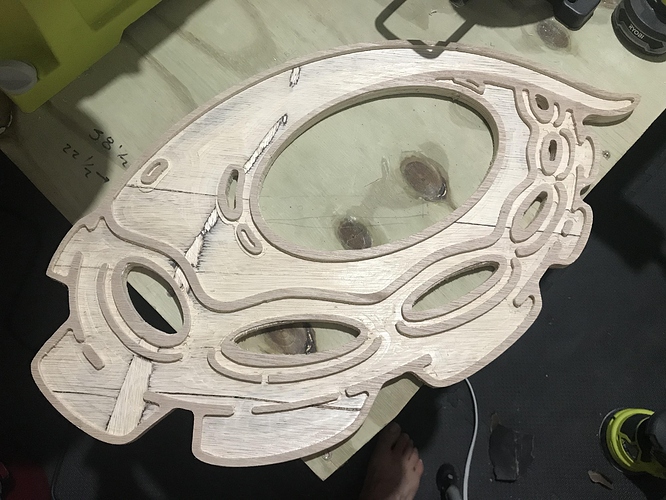 After that I decided to paint it and fill the pockets with resin just to test it out, really liked the outcome: 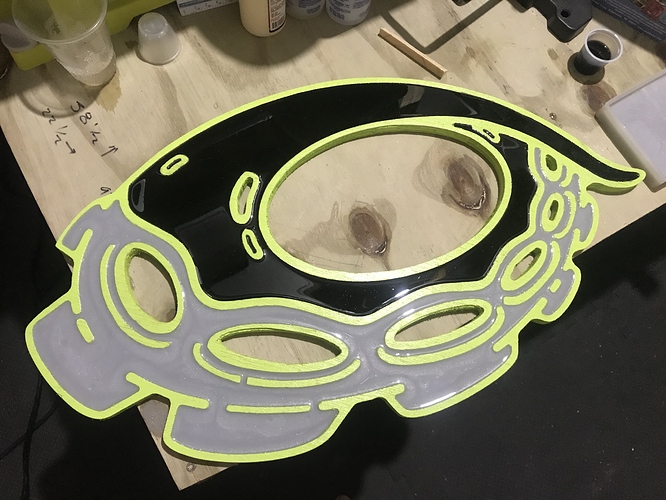 Final size is 15" x 25 1/4" (was cut diagonally). 8oz of black (9 drops) resin and 8oz of metallic grey (2 drops of white, 1 drop of black and a teaspoon of metallic PearlEX powder) resin were poured. Really interested in improving the cutting aspect of the machine so any feedback in feed rates, step downs, router revs, etc will be really appreciated! THANKS!!!

remove the acrylic ring, that should never be used.

Really like the look of the resin. Nicely done.

Thanks a lot! Learned a lot from one go

It looks really really good in person. Planning on pouring a finishing clear coat and call it done

Creating dividers like that to separate the resin pours is a really cool idea. I haven’t seen that done before. Very cool!

I usually do a step down of more like .12 - .15 but everyone makes fun of me for being conservative so who knows

I think I’ll stick with the .2” stepdown, maybe lowering the feed rate now that I know the preferred setting (thanks @LakeWorthB) and eliminate the acrylic ring as @dlang suggested. Pumped for the second project!

So what exactly is the epoxy you’re using? Dyes? Cost? It looks worth messing with for sure.