Hi y’all - I’ve gotten my first design through the process from svg generation to cutting! 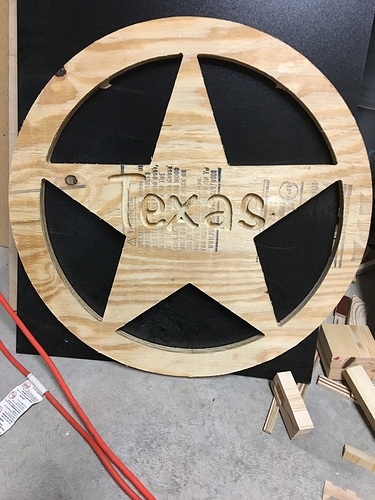 I drew this using an iPad app (Graphic). My file showed up in MakerCAM as vertical red line(s) at x=0. It looked like I was viewing a 2D file from the side in a 3D program. Has anyone else experienced this? It, however, displayed as I intended in Easel. My takeaways about this process (graphic on iPad to Easel to Maslow) are:

Thanks for any feedback, comments and advice - all welcomed by this newcomer.

My inner surface did not turn out as smooth as I had hoped. I used the “fill” option and a step down of 0.2. Maybe this was too aggressive? Or is this a function of feedrate?

.2 is pretty aggressive, but it looks like it cut alright. If you have the space (given the pocket size to the bit size) and the time, I would suggest having your CAM leave a small amount on the outside of the pocket and then doing a finishing operation to take that last bit off at a slower feed rate.

It must feel good taking a concept, drawing it, programming it, then cutting it. Nice work! Not to mention building the machine to do it all on.

Hi Keith - Thanks for your advice. Would I achieve this by drawing an extra shape (just inside my intended outer line for the letters) and then using this for the fill? Then my original outline could be used for the finishing operation? [Maybe I should have posted in the No Judgment category. ;)] Or if it can be achieved with using only the one shape, but generating two sets of gcode?

Would I achieve this by drawing an extra shape

Usually this is handled by the CAM program. I have not used Easel, but a quick look at the interface and this page says that it can be done. I created a square and then added an extra cutting bit that is the same size 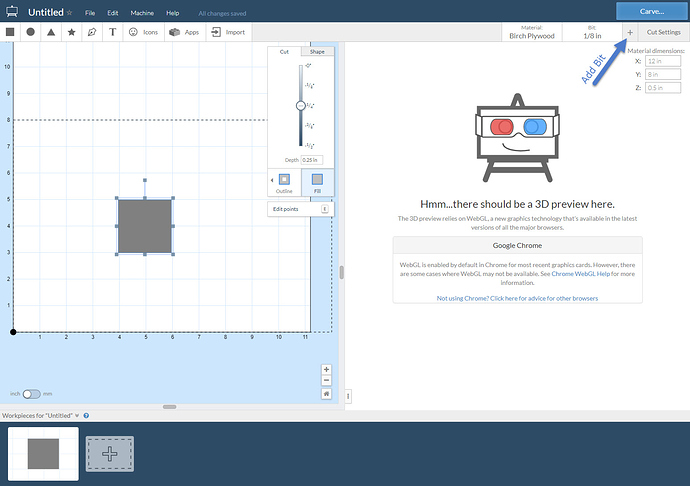 so that I could access the roughing and detail parameters: 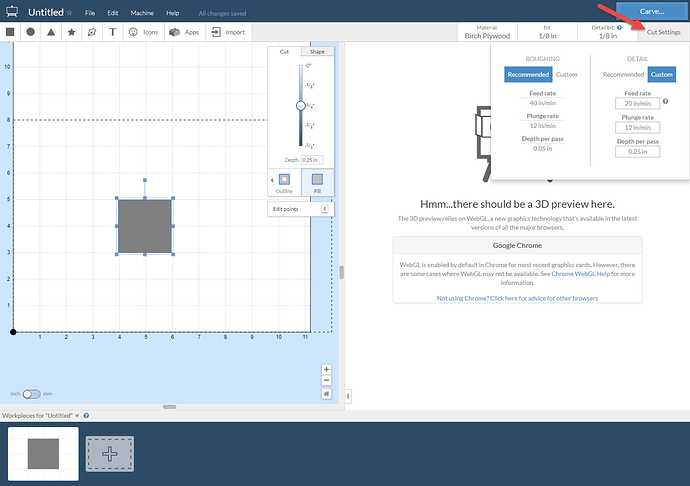 Then you can specify the feed speed that you want. I also made the depth per pass the maximum depth of the pocket since you only want one cleaning pass. Now, I don’t know if this will use that “finish” bit to do the whole pocket, or if it will clean up just around the outside (which is probably all you need). In other CAM programs I have used you can specify how the finishing pass is run, but without playing with Easel some more (and I can’t on my work computer) I can’t even tell what the cut path is.

However, doing a last finishing pass slowly through the whole pocket may not be a bad idea since there might be a little discrepancy in the z-axis. Another way to do a finishing pass would be as you thought:

Either way, I wouldn’t go the route of drawing extra shapes if you can help it.

Or if it can be achieved with using only the one shape, but generating two sets of gcode?

You’re describing a ‘finishing pass’.
One way to do it with two sets of gcode would be by overstating the bit size for the first pass. Say you are going to use a 1/4" bit to do the work, first make a gcode file but instead of using 0.25" for the bit size when calculating the gcode, use 0.29". The program will calculate paths that are 0.145" away from the line and your 1/4" bit will cut 0.02" away from the line. Then create a gcode file for the outline with the true bit size, and “Robert is your mother’s brother!”

Keith and blurfl - you’re both awesome! My only regret is that I can’t jump on it and try those methods out right away. I was really hoping that it didn’t involve drawing shadow shapes, because that would really slow the process down, so thank you for the new approaches. I’m having a lot of fun learning about CNC’ing & woodworking - like do I need a power sander? or a power tool to cut through the tabs? (my little hacksaw takes forever, which is why my new sled is still attached to the plywood and the Tx Star was cut with my temporary sled (I was too eager to wait) & with fewer tabs

P.S. can’t wait for my “Bob’s your uncle” moment

If you make the tabs thin enough to cut with a utility knife (try about a sixteenth or 2mm) you can skip the power tools, then clean up with some hand sanding. Of course if you want to add to the power tool collection then you absolutely need them

Glad to see a project about the great state of Texas, lived there several years.

that is really the way to go!

Of course, if the part is large, large tabs are needed. The latest tool that I bought that I now find awesome is an oscillating tool

I learned about it from some friends that were doing a bunch of house renovating, and loved it. I have to say, they were right. I have found all kinds of uses for it, and it will cut tabs quickly and easily.

Also, it is a multi tool. I originally bought it to cut shingles (which it did fabulously), and have since used it to cut OSB, MDF, and plywood for electrical work (outlet boxes and such). so, if you are going to buy a power tool for cutting tabs, it’s a good choice.

And keep on posting your awesome projects!

@Becca, your first cut looks so much more successful than my first. Congrats.

For the tabs and sander, I use a Ryobi oscillating cutter (JobPlus Base with Multi-tool Attachment https://www.homedepot.com/p/202868525 )
The sander I have a Ryobi orbital palm sander. You don’t really need either, I had them so I use them. I’d use the utility knife like @mooselake said.

My wife asked me what I was doing on a forum. I showed her the picture of @Becca’s first cut she said, “Wow! That’s so much better than anything you’ve done!”

@rerskins
What? I saw your cool Comicpalooza sign and was immediately envious - connecting parts!! Movement!!! Any more exclamation points and I’ll feel foolish. Thanks for the compliment, though, and the advice.

Tomorrow will be spent extracting my sled from the plywood sheet, moving the HW to it & recalibrating. Then, I will retry cutting the text with the various recommendations. Given how long I spent on the first rounds of calibration, it might be a while before I can report my findings.

I hear you on the recalibration, I must have done it five or six times before I made the first cut. It does get easier.

Yes, I agree with you - the calibration does get easier, as does the “oh no, I lost USB connection and now I need to relocate my sled” sequence of actions. I’m hoping I’m past that problem now (all power-saving settings disabled on my laptop, coiled up extra length on my USB cable with it routed away from power cords, RF chokes).

I had to disable power saving on my laptop years ago for my 3D printers. I have lost power to my router though. The power cable came out of the plug I mounted on the top frame. And once I was trying to work on another project while the machine was cutting. Bumped the chain and slipped a few links down the gear/motor. Wondered why my cuts were off so much.

I just remembered your close up picture of you letters. I started using straight cut router bits. I’ve noticed that even though I have to take shallow cuts, the finish of the cuts are very nice. I’ll post a picture tomorrow to compare spiral up-cut, spiral down-cut and straight flute cuts.

Bravo! I had my sled out in no time at all using my utility knife and with much less effort than trying to wedge my hacksaw in there. I’ve gotten the hardware moved over, but won’t get to try experiments until possibly Wednesday.

@Keith and @blurfl
I’ve tried two new variants based on your recommendations. First, with the roughing bit defined to be 0.29 and the detail bit to be 0.25 and then secondly, with both roughing and detailing bits set to 0.25.

Short answer - this method didn’t work for me in this case. My pocket wasn’t wide enough to take advantage of the roughing cut. But going through the exercise showed me how to use this for future cuts.

Here’s the roughing gcode cuts. Not really enough space for roughing out to take place. 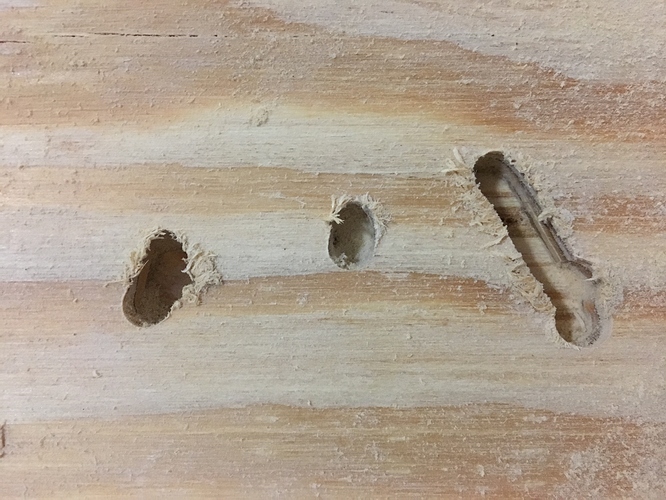 Consequently, my detailing gcode did all the work then. And when I had the detailing pass set to 0.25 depth step down, it was worse than my initial 0.2 depth cuts. So this method will work, if I leave the detailing pass to a shallow depth as well as a slower feedrate.

Here’s a shot of the two results: 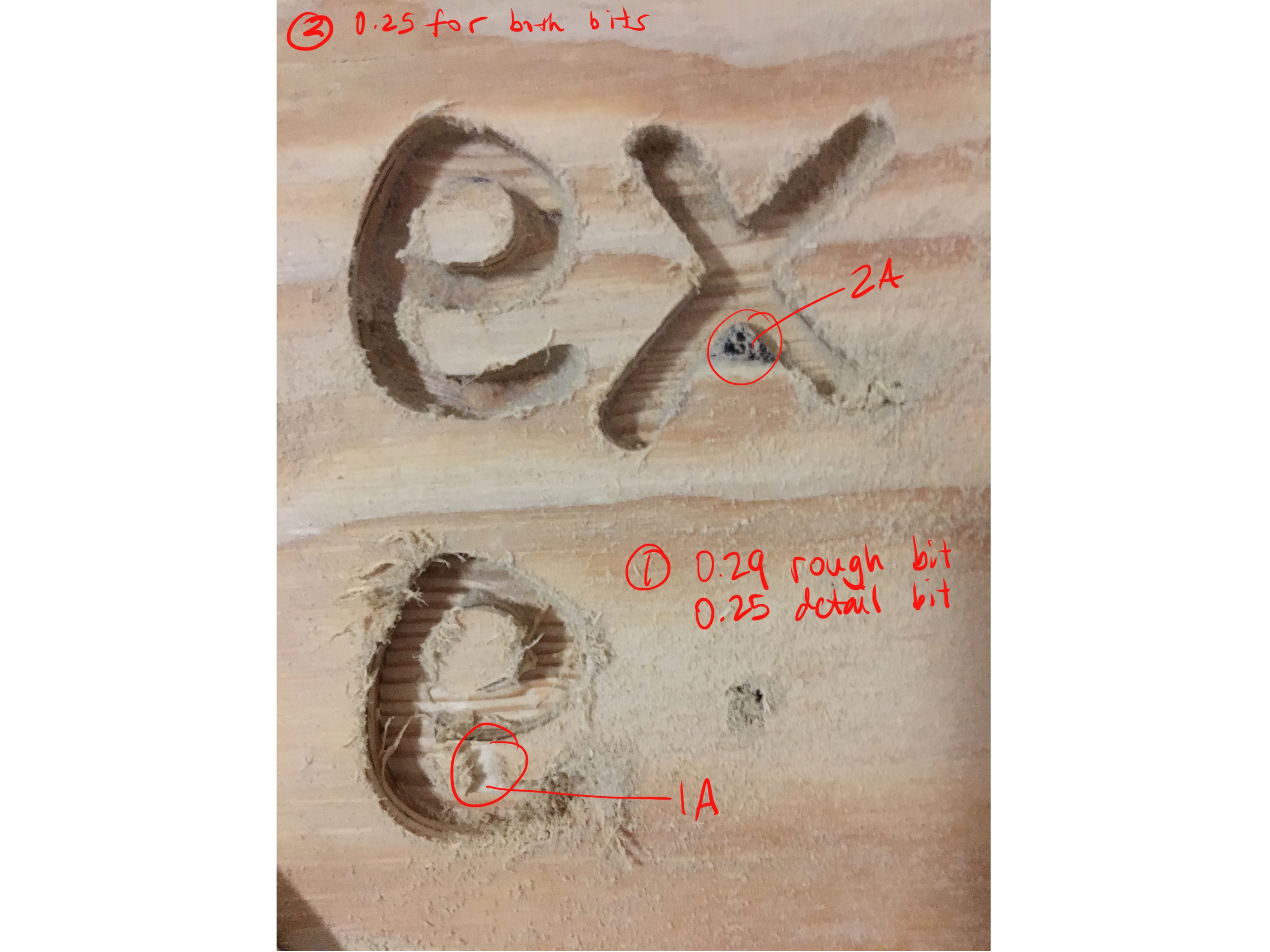 Option 1 left a smoother surface in the pocket. I think I was having a axis issues, since I have an accidental drag-cut (1A).

Option 2 caused a huge tearout problem (2A). I’m pretty sure this was due to the 0.25 step-down for the detailing pass.

I’m using the single flute upspiral bit from the Maslow store and I’m thinking that for this type of work, I should get a more appropriate bit. I keep eyeing the various engraving bits I have for my dremel and suspect that they’re better suited for this.

So, I am not sure that @blurfl meant to have the detail pass go the full depth as I suggested with the .25" bit.

And speaking of bits… it looks like the big problem you are contending with is the fuzz at the top of the cut. What type of bit are you using? A downcut bit might take care of that somewhat. Post cut work like sanding will also help.

On a more expensive note, Baltic Birch plywood might also help. Though I have no experience with it, I have high hopes for using it for various projects.

What type of bit are you using?

I’m using a single flute up spiral. I also bought the 2 flute up spiral and the 2 flute compression that were in the Maslow store at the time I purchased my kit, but haven’t cut with either of them (the router was brand new to me - never used one before cutting the temp sled center circle). I’ve been doing some research on bits - so many choices and such a range in cost, too.

I figured I would use the cheaper bit as well as the cruddy plywood to learn with, but I see your point. At some point, I’ll have to spring for something nicer and those pieces cut on the Birch plywood are definitely prettier.

I’m using a single flute up spiral. I also bought the 2 flute up spiral and the 2 flute compression that were in the Maslow store at the time I purchased my kit, but haven’t cut with either of them (the router was brand new to me - never used one before cutting the temp sled center circle). I’ve been doing some research on bits - so many choices and such a range in cost, too.

That single flute bit from the Maslow store has been my workhorse. With the current feed rates of the machine, I haven’t been able to run a two flute bit very successfully on my machine. Sure, it does cut, but it makes a ton of extra noise in the process and wears out pretty quickly. I’d like to find a good single flute downshear bit myself for pocket operations, but I haven’t found anything that is justifiable in cost.