I have a Metal Maslow and am using WebControl. When the GCode commands the Z axis to lift the tool out of the material to move between cuts, it doesn’t move above the material and instead cuts a slot between cuts.

The attached image shows that the last Z axis move was G1 Z0.2. However, the sled was reported at Z:-0.01 during the move between cuts. Based on the slot depth, it was closer to -0.1. 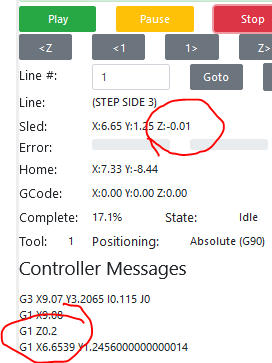