Hello all, so i’ve had some success with my maslow, feeling very lucky to have good accuracy for how little i know, however, my issue comes with the z axis.
it seems to randomly dip lower than what it should be, sometimes drastically sometimes not by much, it’s so random that it boggles my mind, for example i’m currently cutting a project with two pockets, i zero’d in before starting and the first pockets second dip, which was supposed to dip .10 of an inch, dipped about half the depth of the material, and then proceeded to dip properly the next pass, when moving to the next pocket, it’s safe travel had lowered enough to start leaving a trail when traveling, halfway through this next pocket after zeroing again, looks fine… then come the profiles which always work well…
i’ve read so much on it on these forums yet i don’t know where to start. i made sure all cables were clear of cross communicating with each other and were fasted properly. gee any help is appreciated

Can you send a picture of your setup?

definitely, in what way? like just a picture of my setup or of the router part? i’m thinking it’s struggling to move up and down after taking a picture and noticing the wear 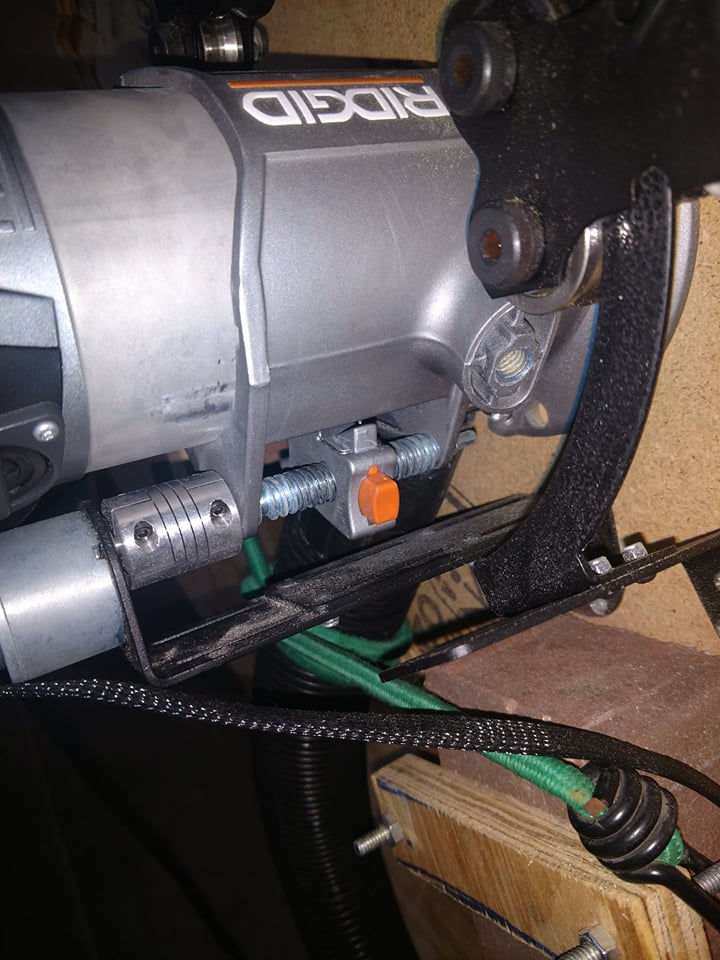 Highly recommend doing everything mentioned in the Cheap z-axis fix with bronze bushing, washer, and bungee. 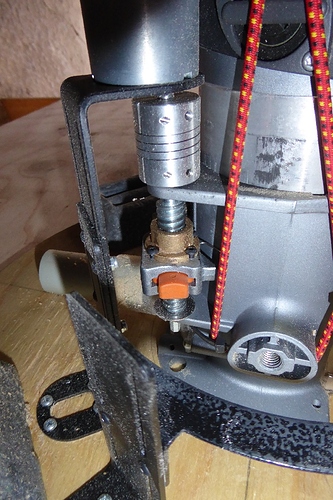 I have drilling and tapped screws that hold the bronze bushing because the glue joint broke away twice. I now realize this probably happened because the bushing reduced the max -ve Z to 0.5" and I was using Fusion360 default settings that raised it to 0.6" between sections/operations. This caused the bushing to hit top extent of movement and bind. I now have set ‘Retract height’ to 0.125" above stock, and ‘Clearance Height’ to 0.125" above ‘Retract height’ which makes max Z -0.25" above stock. This also saves a lot of time as the z-axis is very slow. I do not recommend drilling and tapping unless you have a lot of patience and attention to detail as it took a long time.

If you are going to do this then you should also consider sanding the black ‘Ring’ (see pic) on inside, top and bottom, as the dimpled paint causes jerking motion on the bearings that translate to wobbled cuts.

I was amazed by the HUGE improvement in pocket cuts that these cheap fixes accomplish. Pocket cuts are now completely level even when I do not use ‘final finishing’ passes. It also improved all cuts as ‘Multiple depth passes’ always cut at correct depth resulting in much more accurate cuts.

As Tinker said, do the fixes in the Cheap z-axis fix. I also recommend sanding the inside of the router housing and the channel the index pin rides in as in the post below. I also use dry graphite lube that sprays as a liquid and drys immediately. I don’t have these issues with my z axis now. I’m going to switch mine over to the Meticulous z axis because as previously mentioned the housing and origianl parts aren’t designed to be used this way but, they can work good enough on a budget! Also as stated make sure your travel height will not run the top of the bushing into the frame holding the height screw.

wow thanks you all! definetely going to troubleshoot with these resources here, i see the eventuality of needing to mod to the degree of the meticulous z axis, but glad these affordable fixes are here, they seemed a little daunting but with these explanations i feel confident.
i’ll be visiting the hardware store as soon as able, and i’ll post result once i give it another go. thanks again!

Yep, I will probably end up going this route too but the cheap fixes can be done in one evening using parts from local store and provide good enough results.

Update: I’ve done the fixes recommended, took my time with it since as many of you know sometimes theres not time to tinker, but, i’ve got it going and want thank all of you because it is working great!
Thanks!