I tried this Z-axis concept using the 100mm version of the Banggood leadscrew and slide assembly with a Porter-Cable 690 spindle. While the slide is rated for higher loads, mine became extremely loose as soon as I hung the sled. For me, it’s a POS. I switched to a Rockler router lift for the z-axis. It was pricey ($200), but it doesn’t require any modifications or fiddling.

I believe most of us are currently in a holding pattern given the ongoing discussion in this thread: http://forums.maslowcnc.com/t/z-axis-drilling-plunge-is-the-only-place-ive-seen-browning-heavy-friction.

As of right now, today, the Maslow does not support stepper motors, so all the premade kits need to be modified to take the Maslow motor. At ~12 RPM, that motor may not give the required plunging speeds on a lead screw.

@ChuckC I measured and confirmed my eBay kit has a 2mm pitch lead screw, so it would be even slower than the 1/8" pitch R22002 z-axis. If the stepper motor cannot be supported soon I will most likely return it and take the DIY option wih an 8mm pitch lead screw.

Don’t wait for me!

Yes, something should be done to increase the plunge rate.

So think on it and go run some experiments!

I am also looking for a way to make my Z-Axis plunge quicker, I was however able to easily attach my stock motor to my extruded aluminum with a slight massaging of the bracket with a rotary tool so that it fit the 20mm spacing.

From what I am understanding the slowness of the hardware is the limiting factor for the stock motor, is that correct?

the default setup (Ridgid router base used as z-axis) is heavy on the friction between the router and base (keeping the router in place) and therefore requires a fairly high torque (low rpm) motor to move it at all. Once moved it tends to stay in place because of the Base Collar.

The combination works well for keeping the router in one place and give more than enough travel for most realistic combinations of bits and workpiece thickness.

the Z-axis upgrade was partially to accommodate different router models, but as noted there are attempts to also increase z-axis speed.

The Back/Lead screw Z-axis approach has some problems too vs the default design: re-engineering dust collection, and the introduction of the possibility of backlash or other movement as a result of much lower inertia and friction in the screw.

It’s possible that setting up a gear reduction can solve the speed issue, but it hasn’t been tested yet, nor has the inertia/friction situation been properly addressed.

Ideally, (and what is achieved with the default kit) you want the router to be quite sturdy in all directions in the mount, and you don’t want any movement at all in the z-axis aside from when it is commanded to move.

so far, we haven’t seen (i could be wrong) a Z-axis upgrade that achieves this at the same level as the default, let alone with faster travel speeds.

Thanks for for the quick response. To be entirely honest I do not necessarily like the stock lead screw situation and requiribg a bungee or other device on there to hopefully keep it straight so as to not bind. That is why I have set out to make a better Z Axis, you are correct in that I will have to address the dust collection but I would like to think that my design when finished would be as rigid as the original router design while also allowing greater flexibility in bits, movement, accessories, routers etc.

Since I have not completed my permanent sled yet I would love feedback, I posted an update picture on my other thread today talking about the Z Axis here.

Thanks for sharing your experience. Can you elaborate on “mine because extremely loose” ?

$200 right now would be alot of saved lunch money

I assume you attached your original maslow motor to this unit http://www.rockler.com/router-lift-fx ?

I just measured 0.035" wiggle from a moment applied parallel to the slide’s motion axis. This is what it went to after I mounted the router and hung it from my chains. This unit started with the roller bearings positioned to fully engage the guide rods. It was solid with no perceptible wiggle and it went to this. Someone might be able to tighten it back… it just wasn’t worth my time and the virtual assurance that it would loosen up over time. 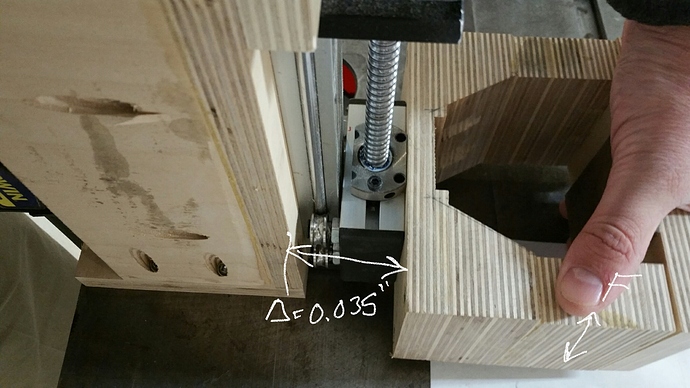 @ChuckC,
I am still using the Slide. I use my ridgid housing that I cut down to hold the base of the router still and centered. I saw another was printed, and I suppose you could use wood also. I chose to stay with the router base because it has the dust collection built in already. I cut it down to let my spindle clamp travel down far enough to cut through about an inch of wood on the bit side. I have had no problems with the action. I just ordered the faster motor that @brazz04 recommended in the Z-Axis Motor Wiring forum.

If that was for me, my picts are above in this feed.

just a note, the rigid router with the stock Z axis has a lead screw (a fairly
course one)

the bungee is not on there to keep it straight or prevent it from binding, it’s
to take up the backlash on the lead screw.

Remember, you should be running with the latch closed, with the nut under the
latch loosened enough that there is almost no play in the router, but it is able
to move.

If you have enough slop that you are thinking in terms of keeping it straight,
it sounds ike you are running with the latch open.

Thanks for the clarification, that is what I was originally under the impression the bungee was for, however, I guess I was having a hard time finding that sweet spot because it always seemed either looser than I would prefer or it wasn’t moving as freely as I would like. That is why on my other machine I am trying a completely different approach to see if I can get any different results. I figure it cant hurt anything but my pocket book haha.

What about the 90:1 motor they have available as well? At 12v not THAT much less torque, but would increase speed a lot more yet?

eppc did you ever find time to make your 500w spindle z axis sled? any thoughts on how it worked out? I am looking at doing the same.

Rockler router lift for the z-axis

which one did you buy? http://www.rockler.com/router-lift-fx
cheapest one looks to be $220?

The setup requires use of the wood parallelogram linkages (it’s too big for the ring kit), and the z-axis is 1/2 again slower than the Rigid R22002 (16 vs 8 pitch lead screw threads), but it’s super accurate, durable, and all things relative, easy to setup.

Here are some pictures of my sled. Note that the linkages are mounted to a standoff plate that sits above the router lift plate. It was easier and more accurate to mount the router lift to the non-work side of the sled than pocket it into the sled’s work face. I’ll create a new thread specific to the Rockler Router Lift with the build details. 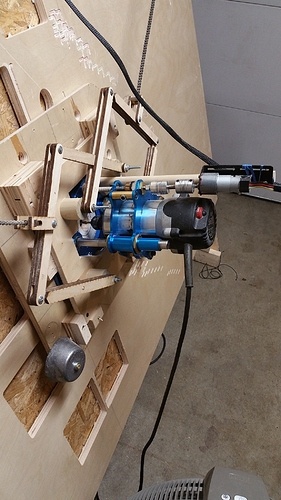 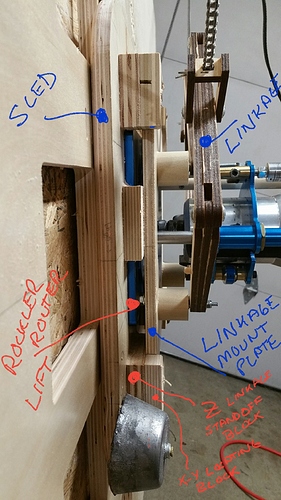 @aluminumwelder I’ve not seen that. Very interesting. Will you add a link to the thread that references this motor? Will these motors (~6.5 A max / 12V @ stall) work with the stock boards?

Jon, I am about to buy a motor to speed up my Z do you still suggest using the 90:1 motor from amazon that is linked above? Or did you get the one that is further up the page that is 131:1? Edit: Does anyone know if someone has tested with the 90:1 versus the 131:1? If so is it worth it or does the 131:1 speed it up enough? Thank you, lots of questions.

I have not personally tried it, ask some people in above topic please