yes angles like that can hold the workpiece and wasteboard,just keep in mind that since that angle is 2". you need to have that much material or you run the risk of hitting the angle with the edge of the sled.

but if you are wanting to bring in your plywood in pieces, you will want to have more support for it than just the two angles.

For your installation I’d suggest a bottom board. Mount a 2x4 with a bolt through it to the unistrut above the angles on each end. A minor primer on fasteners - most people see a fastener (bolt, or screw) as a “tightening force” pulling one surface towards another. While this is one of the functions of a fastener they most often are pinning a lateral force agains shear strength. In this case the angles will work, if you bold a “ledge” above them across as a working surface - you get 100% working surface from side to side. Without something like this, over time putting material on the angles you will bounce the material and eventually deform the angle and they will fail. The Ledge will straighten and absorb this force.

I hope this helps

any recommendations on what cad program he should use?
he’s done some autocad, tinkercad, sketchup before but not super
proficient.

he’s most comfortable with illustrator which he says can generate a svg file.

would that work?
i wouldn’t think so but i don’t know much about CAM.

If Illustrator can export .svg files, then he could use MakerCAM.com to program his parts. It will import svg files just fine and it’s pretty straighforward to use. Bar goes through the workflow to generate G-Code from SVG in this YouTube video. The beginning of the video covers exporting from Sketch-up, but if you want to just skip ahead to the MakerCAM part go to 1:58.

If he’s willing/has time to learn 3D CAD, I highly recommend either Fusion 360 or Onshape. Both are free programs for what he would be using them for. Fusion 360 is free for hobbyists and students, and somewhere around $300 a year if you’re actually making money using the program (which is nothing next to the $3,000-$7,000 other professional CAD subscriptions cost). It has built-in CAM, which is the reason that I primarily use it. Onshape is entirely open-source. It doesn’t have built-in CAM, but you can use the Kiri:Moto app and that will give you CAM.

thanks.
i’m hoping he’ll go with fusion360 as well since it
seems to make sense that it’s all integrated.

he’s worried the learning curve is too high.

Since he has some experience already with CAD, the learning curve shouldn’t be too high. It took me about a week of playing around to start to get comfortable with it. I do have a lot of prior 3D CAD experience, however. Before Fusion, I had been drawing in Solidworks, Creo, AutoCAD, and Rhino since about 2011.

For a crash course in the user interface, Lars Christensen does a good job in this video:

I found these YouTube tutorials very helpful when I was first learning Fusion. They help cover building assemblies from sketches, user variables, nesting parts, and setting up CAM toolpaths.

I made the flat pack stool from the second video here.

More obtuse but totally free and can do 2 & 3 is Blender. 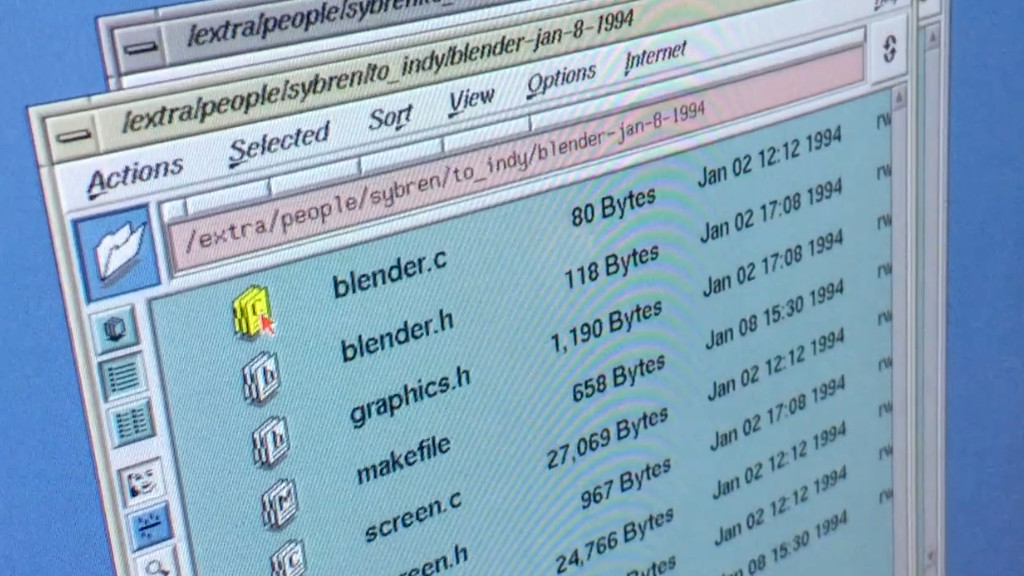 There are options to get .svg exports. I also see options to .dfx My son jumped in to blender at about 16 and is now 23, he can kick out a design pretty fast. Lots of youtube on how to get going.

I actually learned how to 3D model in Blender at about the same age as your son. At the time, I just made spaceship models and a couple of Warhammer 40k vehicles for a mod I was helping out with. It’s a great program for learning to model, and I’m sure it’s progressed since I last used it.

suggestions for hanging mount (safety chain) for router?
i’m thinking he needs something to keep the router from falling when hooking
up chains, etc. by himself.

A common solution to the problem is to hang the sled from the top beam when it’s not in use. It helps loading/unloading plywood onto the machine if the sled is out of the way. See my post in To rest or to hang for more details.

The safety chain would probably work if it hung from the top beam and was on a quick-release (like the stock chain mounting).That way, it could be disconnected while the machine is cutting. It would still be in the way for loading or unloading, but may be easier to access than if the sled was up at the top beam.

so far so good. starting to install motors when i left. 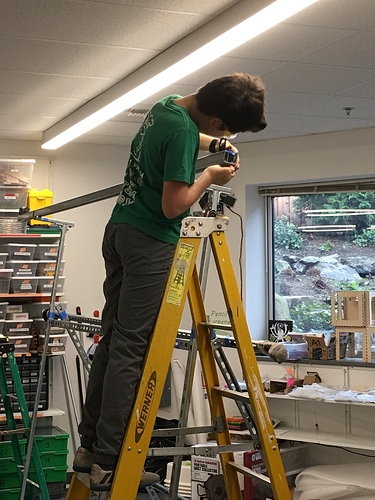 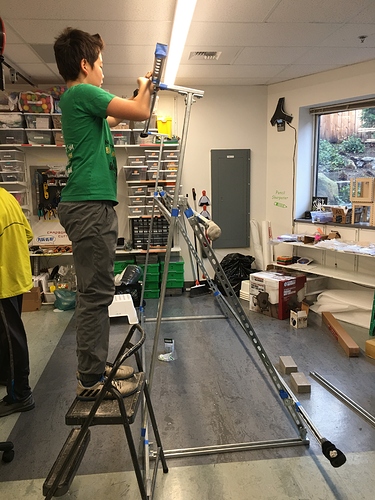 Keep up the great work!

We don’t yet have a Unistrut frame in -

Is this one designed from @dlang plans?

he used pictures and list from @bdillahu and then modified a bit
based on info from forum and his own ideas.

what’s the diameter of the holes in the brick holder?
he can’t seem to get the makercam to create a cut.
is it a drill instead of profile?

i think we’ve hit the part of the curve that is a bit steep…
thanks.

iirc 1/4"
not a critical dimension, you just have to have botls that hold

If the bit size is very near the size of the hole it’s cutting, some gcode generators choke. You can make the hole size a little bigger, or lie about the bit size (say it’s .24" instead of .25" for instance). My approach for the brick holes was to use a hand drill

he figured out that drill operation worked.

tried to cut sled.
this is what he got. 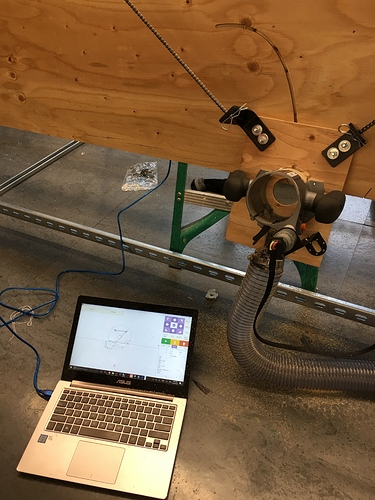 Let’s start with getting it to center…did the calibration process go OK?