A Christmas tale for Maslownians

Please excuse my poor English, and keep reading this true story, which may look like a Christmas tale for Maslownians

Once upon a time…
When I joined Kickstarter’s waiting list for Maslow two years ago, I had the strong intuition that it would be a good tool to cut and build hives for the beekeeping voluntary association I was a member of. But the association advised against buying – too risky, they said! So I thought about it carefully, then I bought Maslow for myself and later I started my own non-profit association, named « Tous aux abris! » (French word game which means « Everybody inside! » and/or « Let’s all make shelters! »). My first cut with Maslow was our sign, in front of the workshop. 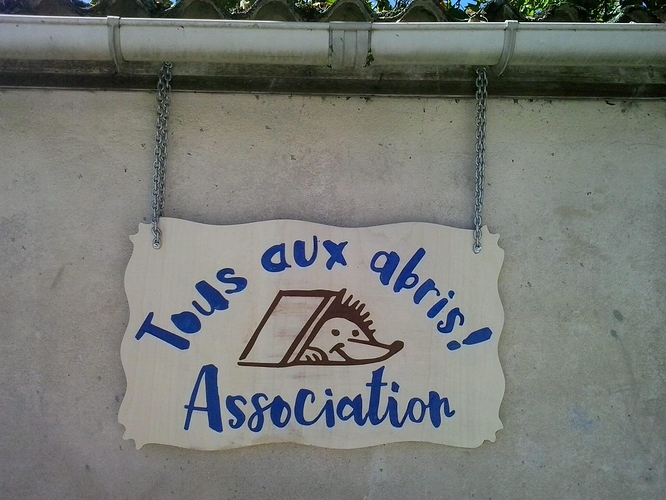 Our goal is to help citizens to share their inner space with biodiversity, building together houses for « liminary » animals. Liminary animals are wild, they come closer to the man to find their food, but do not want to create a bond with him. So: don’t touch them, don’t feed them, just share your space. My first focus is on houses for hedgehogs, for bees, of course, and for bats, because all of them are in collapse risk. However, in France, all cities have stopped using pesticides in public places, so insects come back, and with them can come back up the chain.

So, after a year in its box, my Maslow was installed last August in the workshop of the association. Two months went into tests and small achievements, when we got time to. Some people were interested in our project, and Maslow is the star of every visit

Here is Maslow in front of Bordeaux mayor, who was France prime minister. 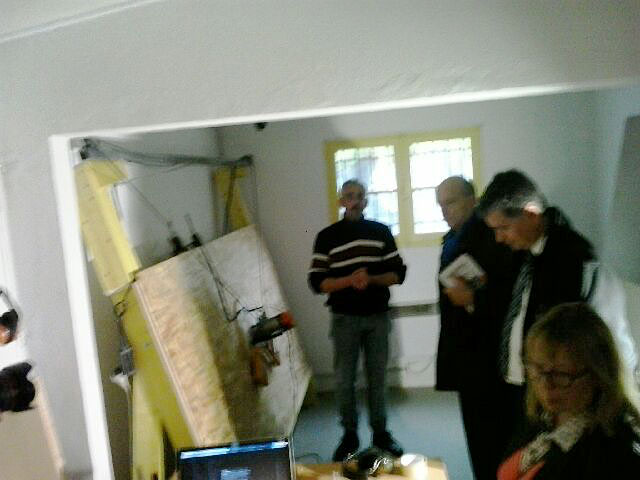 At the very end of october, Merignac, a city near Bordeaux, about fifty square kilometers, contacted us for 250 bat houses to be built for december 8th. It was impossible to decline that first opportunity! We needed to give an estimation and we had to win this market to make ourselves visible.

Research and development
So I spent hours comparing existing bat houses, measuring and calculating prices. We selected at least a very simple model, which boasts an above-average occupancy rate, and we wanted to offer it as a design kit ready to mount. Our wish is to involve the inhabitants in the manufacturing, in family, while optimizing their user experience. Pre-drilled, interchangeable parts minimize the risk of error, in the manner of a famous Swedish furniture manufacturer…
I made a prototype on Maslow, then submitted it to Merignac mayor council for approval. Thanks to this prototype, so thanks to Maslow, our project was chosen 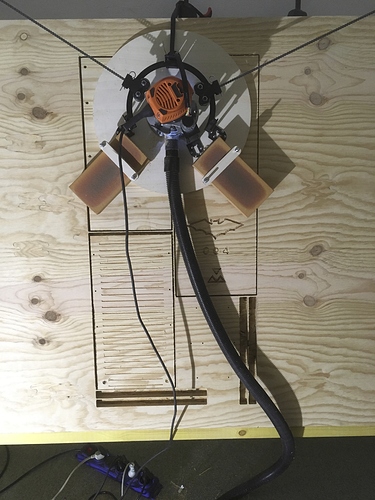 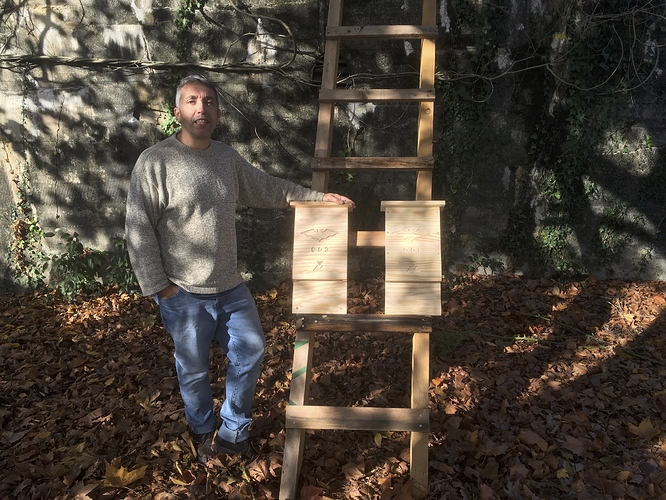 To be able to meet the deadlines, we used a local subcontractor, a company adapted for workers with disabilities, in short circuit, equipped with a very very bigger CNC. Thanks to them for their quick and neat work.
http://tousauxabris.org/wp-content/uploads/2018/12/IMG_1127.m4v

The raw wood comes from the region (maritime pine) and we have been certified free of formaldehyde or methyl bromide, because the treated wood may make the males sterile, which is the opposite of the goal! All project stakeholders are concentrated within a radius of 100 km maximum. 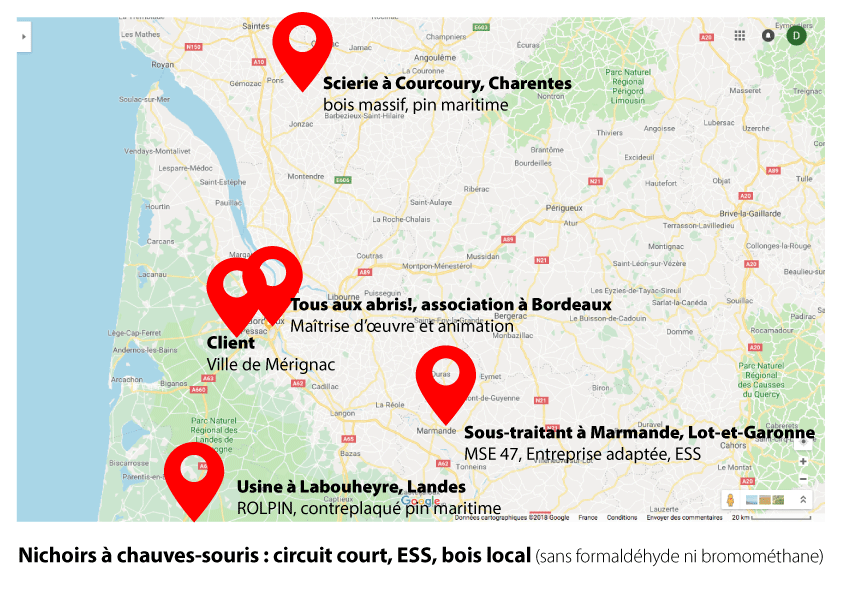 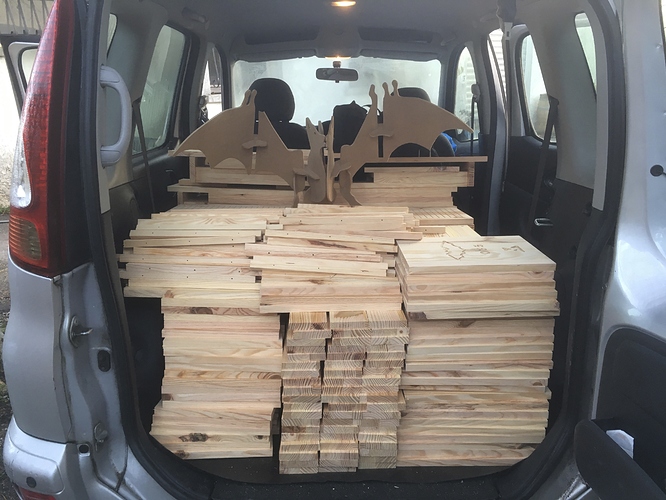 First public presentation
Each nest box, numbered, with Mérignac city logo and bat drawing, is geolocated. Currently, 100 nesting boxes have been distributed on December 08, 50 more will be on 19/12. We were very surprised by the commitment of the 100 Mérignac inhabitants who signed up, patiently, in an uninterrupted line, listened well to our advice of assembly and installation, then left each with his nest box, and all this in just 2H 30! 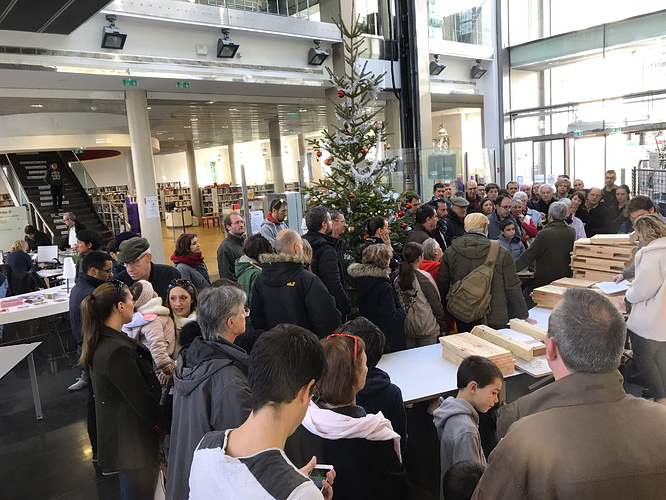 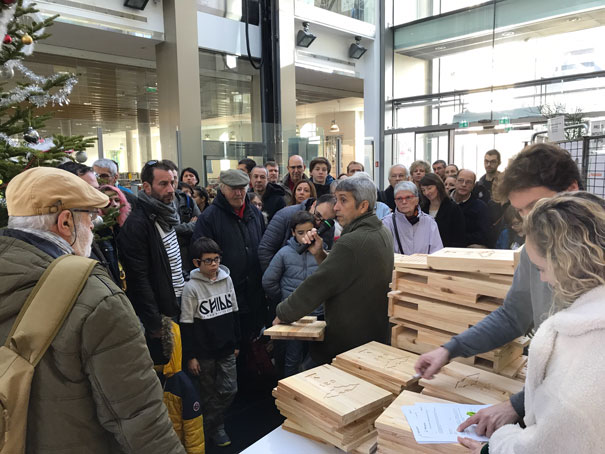 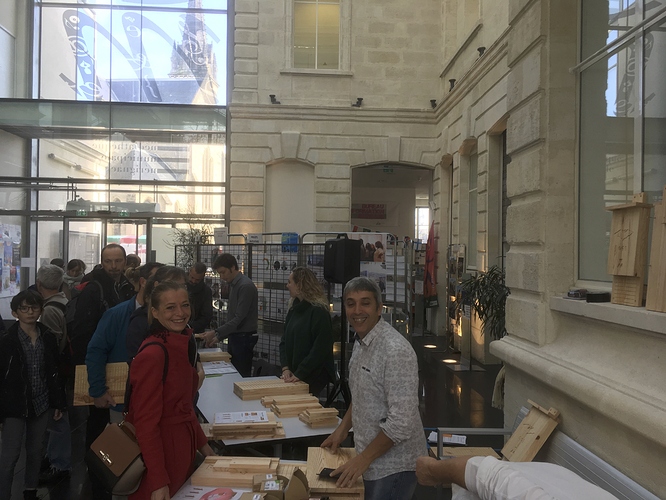 (O tempora, o mores … That same saturday, when 40 people waited patiently in the cold in front of the gates the opening of the doors of the media library to pick up their nest box, and thus act in favor of biodiversity, a few kilometers away, on the sidelines of a demonstration of "Yellow Jackets“, some hooligans smashed the window of an Apple Store to grab the iPhone and iPad, symbols of a more selfish happiness …)

To accompany the delivery of nest boxes, we installed an exhibition of 5 panels on bats, lent to us by SFEPM (French Society for the Study and Protection of Mammals), as well as documentation. And we contacted the GCA (Groupe Chiroptères Aquitaine) who helped us by holding a booth to inform the public about the lives of bats. The GCA could be the scientific interface of the project because it is an association with many bats specialists, able to establish participatory inventory protocols. 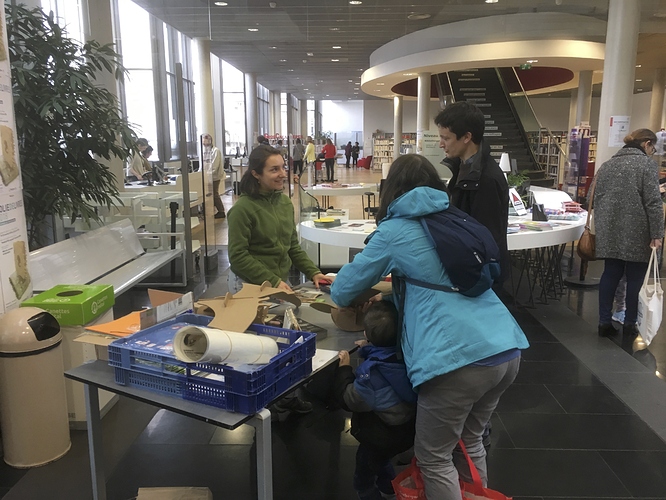 We had also cut out 2 giant 3D puzzles of bats, with pieces to put together by children, and also realized a quiz about bats (true or false?), to which answered those who wished it. William, active member of Tous aux abris!, had meanwhile manufactured a template to facilitate the mounting kits on site, and made available to people wishing to leave with an operational nest box. 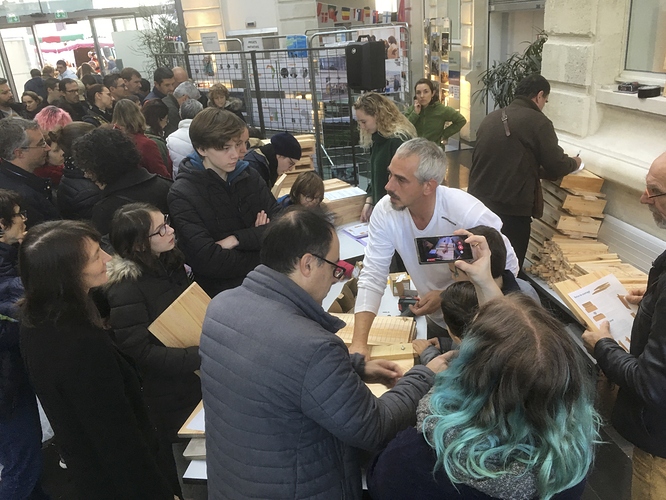 In summary
It was a beautiful day, which confirms the natural commitment of a large number of people to biodiversity, when they are offered the opportunity, as demonstrated by the City of Mérignac.
After the last 50 for 2018, on next wednesday, 100 bathouses will remain to be delivered, running in 2019, as well as the following of our support on this operation: networking, installation follow-up, various animations (ideas do not miss!). 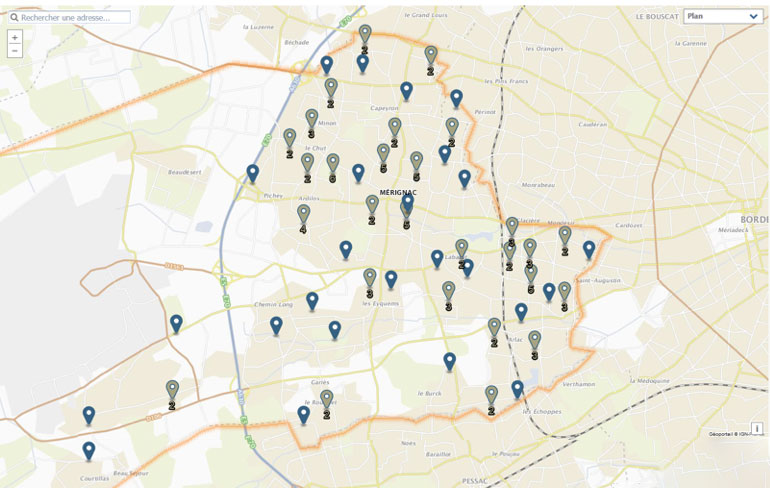 Yesterday, the local newspapers published an article about the event. 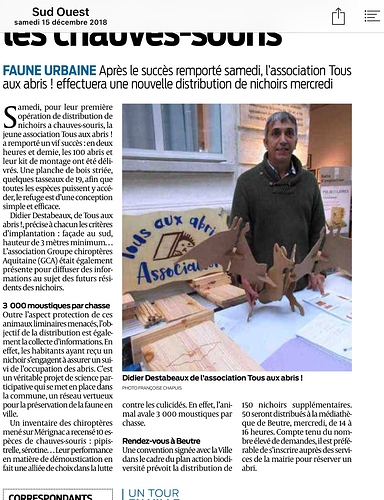 Thanks to everyone who made this action possible! So thank you too, Bar and Hannah, for bringing Maslow’s concept to life, and thank you to the community for feeding it, and for responding with enthusiasm to the questions of beginners like me!

I wish you a Happy Christmas,
Didier

This is an amazing story of a maker having a huge impact on their community. If you’re willing to share the plans for the bat houses, your impact and spread across the pond as well! I’m eagerly waiting to get my Maslow in January and I am lining up projects. My three young children love to build stuff and anything to get them in the outdoors sounds like a great project to me.

Thank you John, I’ll certainly share the plans in the right place, i.e. Community Garden, as soon as possible. However, they are optimized for most of European bats, the entrance of the room is 19 mm large. I don’t know if American ones are on the same scale.
Bat houses must be placed between 3 and 5 m high, from South east to South west. Nothing should interfere with the entrance up to 2 meters below.

What a great project! This looks like a good reference for bat houses: http://www.batcon.org/resources/getting-involved/bat-houses

I once heard an interview with an expert on bats, and was amazed at how cool these creatures (that I had never thought much about before) were, and how important to the environment they are. I have seen bats in my neighborhood here in Southern California, so I may make myself a bat house with my Maslow, and see if I can get some tenants.

That is a great story! Congrats on accomplishing such a large and greatly beneficial project.

This looks like a good reference for bat houses: http://www.batcon.org/resources/getting-involved/bat-houses

That site is a great reference and has lots of very useful info. I built two of the ‘Four chamber Nursery’ houses, out of cedar, not on Malsow, at least 5 years ago. 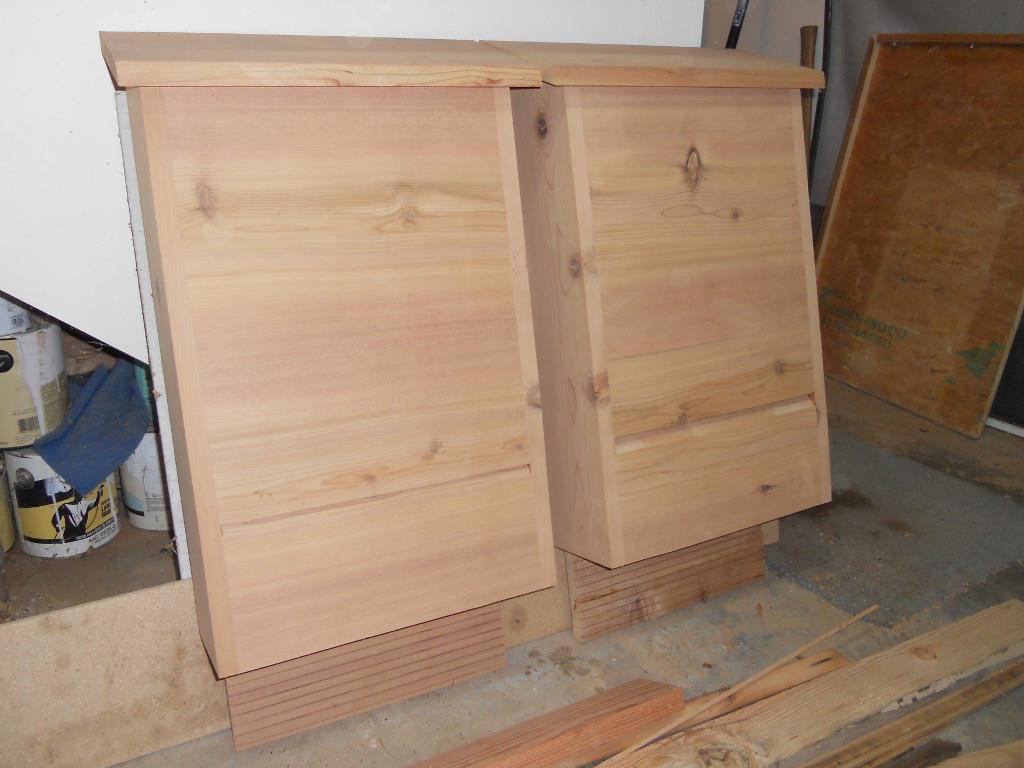 Have a thriving community which does wonders on keeping mosquito population down. Barely have any mosquitoes in comparison to neighbors and we have streams on the property. See them flying out at dusk most nights as the houses are just above 2nd story windows which is very cool. Built the houses because the bats got into the roof one year. Once I mounted the houses the bats moved in quickly with a couple of weeks.

From a brief look at bat literature, as far as I can tell, “American” bat houses use a 3/4" (~19mm) entrance or more specifically, 3/4" chamber spacing.

I hope you post your plans soon as this is a wonderful and beneficial project. Congratulations on your success!

edit: btw, your english is excellent

Thank you @theHipNerd! I didn’t know batcon.org, even I have seen some of their plans elsewhere. My conception was very simple (French letterbox), because I only got one month for the entire operation. I’ll dig into more complex batboxes later…

Thank you @tinker, what a nice boxes, with cedar!

@maddog7. So American bats seem to be as thin as European ones! Yes, 19mm for entrance and room size. Maybe 15mm for pipistrellus, our most common bat in cities. All of them are microchiroptères, which eat insects, vs megachiroptères, the bigger ones which are in Africa or Asia, but eat fruits. I am not a specialist, I had to learn in an accelerate self-learning, last month!

What a fantastic story - my Maslow is still in the box but we have worked out quite a lot more on cnc with a Stepcraft 840 and intend to get going on the Maslow in 2019 - I hope that we can find something similar to help the local communities in north west England - we are currently using re/upcycled old oak gateleg table tops bought off ebay as raw materials to make personalised signs/plaques - is there a Maslow group in the UK?

Thanks @Mark_Greenhalgh! Using recycled material is one option for us, too. I made a Top bar hive with recycled pallets, and a wandering swarm of bees came to settle in, before the Asian hornet forced him to leave, two months ago…

For all those who are interested, I just added the elements in the Community garden (Food&Shelters section). I translated everything I could to English… but please don’t ask me to convert millimeters to inches!