A little Maslow in this one too

Well, here’s another project that has a bit of Maslow in it. This is why I backed the kickstarter, hoping I could use it for this. Stoked. 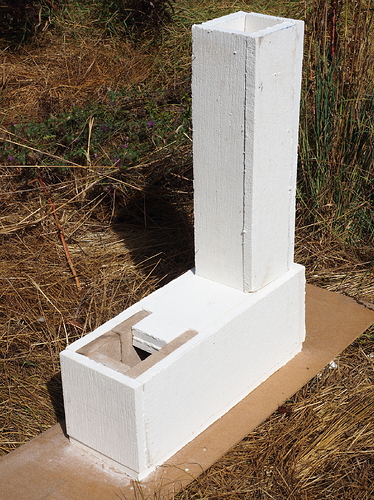 Are you using this on an off grid property?

Well, I’ve got 30a of AC here at the shack, but run mostly off of solar. Depends on your definition I guess. Last winter I just showered out there on the deck, so this is going to allow me to bathe a bit more often.

I was going to suggest routing some copper tubing in there to heat water.
Which could be used to heat and we’ll hot water.

I’ve got one inside here that has a down-draft chamber dedicated to a heat exchanger. I haven’t built the heat exchange yet, but that’ll come.

Does this ceramic fiber material degrade from use?

No, will last a lifetime in the flame path.

I love this! I bought into Maslow with the same sort of ideas. I’d like to build a rocket stove, and dream of building a large gasification wood stove for the shop where Maslow is at - I’d use Maslow to build the forms I’d need.

The other dream of mine is to design a solar water collector that can be built with Maslow.

Thanks Nathan, it is so exciting to be able to do this stuff small scale like this. A solar collector would be cool, for sure.

A tall chimney is necessary for a smokeless fire.

Not here. This one will burn with 0ppm CO with no chimney at all. We’ve been wrong about how to burn for centuries. I hope to correct that. Sorry Moose!

We’ve been wrong about how to burn for centuries. I hope to correct that. Sorry Moose!

You found out about my highly inefficient outdoor wood boiler?

I caught whiff of that OWB from here Moose. One of your first posts you said something about 30 cords and I knew what you were up to immediately. Hopefully you are not one of those guys who loads it with green logs 'cause it “burns longer.” You seem way too smart for that though. I’m hoping you are running a Garn or Professor Hill’s Jetstream or something that at least attempts to burn completely. Those are kinda rare in the OWB world though, and for good reason. They aren’t cheap. No offense, I know it’s way cold out there and we all make do with what we have. I’m sure you’d rather that 30 cords was 10 yourself.

Over 40 cords, which should last at least 3 winters. Only burn green when desperate, what with losing all that heat to making steam.

While the Earth Outdoor Mountain Man will take 6 foot fenceposts diagonally we cut to 20" (works well with the 100" logs) and split em. Otherwise Mrs. Moose won’t do the morning stove loading, and they season a lot faster. Need to mostly pass the one handed rule. The EOMM Is essentially a round pipe with a stack that goes to about 6" from the bottom

Have about 8 feet of stainless stack, and boiler is in a 14x16 shed. House is warmer than it’s been since propain quit being cheap. Only smokes at startup if careful with fire size, and plan to try a PID controller, using stack temp, on the forced draft fan this fall. Going to experiment with diverting some of the combustion air up through some square tubing, see if it burns the gasses at the top better.

It replaced the pellet stove that replaced the Jensen 40B boiler that replaced the Defiance Volcano 3 prototype. Kent Tilefire in the kitchen, bought new in 1979, great stove, that uses the shorts from the long wood cutting project. It also gets the woodworking mistakes

Nice rigs! That isn’t bad consumption at all. That design is a simple way to get pretty dang complete combustion. Have you ever stuck stove pipe down low in a burn barrel? That’ll chooch!

That Tilefire is a neat unit. It looks like it gives a good show with that secondary burn happening up front. Ahead of it’s time by the looks of it. Good stuff.

The Tilefire still looks almost new, no warping and only a little rust on the box. Run the tiles through the dishwasher every few years. Wonder if I can get a fan kit when we’re in NZ?

awesome! I was afraid that roll of aluminum was going to defeat you, but you showed it who was boss!

It seriously almost got the best of me. Will I never learn to not set them down on end?