I will make sure to get that done soon.

I have a 12’ topbeam on mine. I have been running fine so far, though haven’t tried the calibration test though so don’t have any specific numbers.

I thought I should show the finished gate insert that I was cutting since I sent photos of it in progress. I finished installing it at around 10 pm last night. My Wife and I wanted to have a buffer to keep our four dachshunds from running out the front door and off the porch when we opened it. 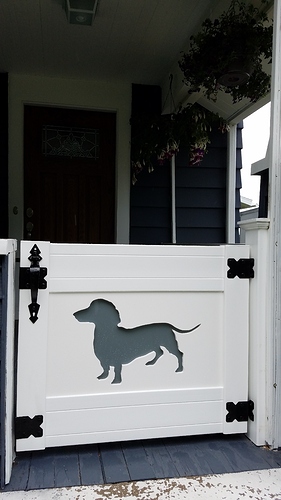 keep our four dachshunds from running out the front door

Life is always better on the other side of the door

Awesome! What is this cut out of? Is the entire gate cut on the Maslow?

The center panel is cut on the Maslow. The rest is a standard PVC gate kit for PVC fencing that I picked up at the local Home Depot. I got the idea from multiple sources.

The PVC sheet was suggested in the forums Outdoor Sign for Coffee/Bicycle Shop which led me to looking at ideas for a gate.
Once I saw the products here http://www.islandcreekdesigns.com/coastal-porch-railing-panels I knew I had to try making a custom design myself.

I purchased the outline from https://www.etsy.com/shop/RoyalPixels
I may be handy, but I don’t think of myself as artistic and at a price of $3.40cn which worked out to $3.44us for me it was absolutely worth the money.

I did the CAD/CAM in Fusion 360, free for users like me, which if you can get past the extreme learning curve, is totally worth using for more complicated projects. They now have a Maslow g-code post processor that I got from here https://forums.autodesk.com/t5/hsm-post-processor-ideas/a-fusion-360-post-processor-for-maslow-cnc/idi-p/7796167 It seems to work well, but this is the only time I have used it.

The PVC material at the local Home Depot is only available in 1/2 inch sheets. The original slats that the gate is designed for are 7/8 inch thick. this led me to a two layer design that allowed for easy painting of the outline. I made the cutout in a full 1/2 inch thick sheet and then I made the other sheet with a 1/8 in recess all the way around the edge to fill the back, you can see this in my earlier picture. I painted the face that would be in the middle grey to make the image easily visible. I sandwiched the 2 layers of material into the gate kit the same way the slats would have been inserted. The gate kit was designed with a full size fence panel in mind so the weight difference of the hollow PVC slats to the solid PVC insert was not a problem.

Notes on Fusion 360 free: Read the section under STARTUP: for home and hobby use which is most of us.
https://www.autodesk.com/company/legal-notices-trademarks/terms-of-service-autodesk360-web-services/autodesk-web-services-entitlements
and then the download link is here:

How to activate Start-up, Student or Educational licensing for Fusion 360 |...

When you start Fusion 360, a countdown clock is displayed for a trial. You want to know how to select the free Start-up/Enthusiast or free Educational licensing option.       Important License Information: To activate Start-Up or Educational...

Life is always better on the other side of the door

I love the build. Any chance you could put together a parts list? I just ordered my Maslow and have been looking for the best way to build it. Your build looks like it might do the trick.

What exactly is the purpose of the IoT relay? I’m not following.

Programmatic control of the router, i.e. turn it on and off with gcode.

Bar has some liability concerns about this, but it’s a pretty standard CNC controller feature. Otoh, people not being careful paid my bills for many years so pay attention to the interaction between sharp spinny cutting bits and your skin and underlying body structures to avoid being an anatomy lesson

I really like the handled connectors your using, can you tell me where you got them and what they are called?

In one your pics you show the relay, and unless im mistaken, you have a 110 AC fan connected to the always ON output of the relay by just poking the wires into the socket???

uh, yeah dude WTF is up with that?!

remember, if you need 1 fire extinguisher, GET 2!

You are correct it is a very bad idea. It was a short term test and has already been moved to a proper connection. I hoped no one would notice the shoddy wiring on the fan. Love the reference to the IT CROWD.

I hoped no one would notice the custom, variable resistance wiring on the fan.

Its how you adjust the speed of the fan right? just wiggle the wire a little

That show rocked! Heard Moss was even considered to be the new Dr. Who! before they went with who they did.

Hope you or someone else could answer a question for me. I want do a relay to turn my router on and off as well, but couldn’t find one of the ones you did. Looking at one of these, as I gather the Router pulls 11 Amps max, but i am never sure how to read the specs. 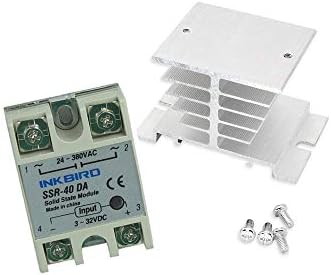 Thanks, the bit i don’t get though, the Voltage is a range, and the amps is a specific number. 40 Amps at 24 volts is ALOT less then 40 Amps at 380 Volts? Or am I misunderstanding the way Amps work? No electrician.

Excuse the ignorance, but a question un-asked is a question never answered.

Amps is current and what leads to heat…

If you for example have 120 volts on a cable and run 12 amps through it, it’s essentially the same amount of heat created as running 240 volts at the same 12 amps. (assuming the cable is rated to carry the voltage ranges)

Wattage is Volts x Amps so in the example above, you would be sending twice the wattage at 240 volts vs. 120 volts. Wattage is the real measure of “power” i.e. a 1000 watt heater is warmer than a 500 watt heater.

Wires are typically sized for the amps. So if you think about it, sending 380 volts at 40 amps = 15.2kW if you try to send the same 15.2kW at 24 volts you would need 600+ amps (this would require very thick cable and generate a good amount of heat). Increasing the volts is how they are able to send a large amount of watts over a relatively small cable (low amps).