After updating firmware and gc to 1.27 my squares are now parallelograms. see pic 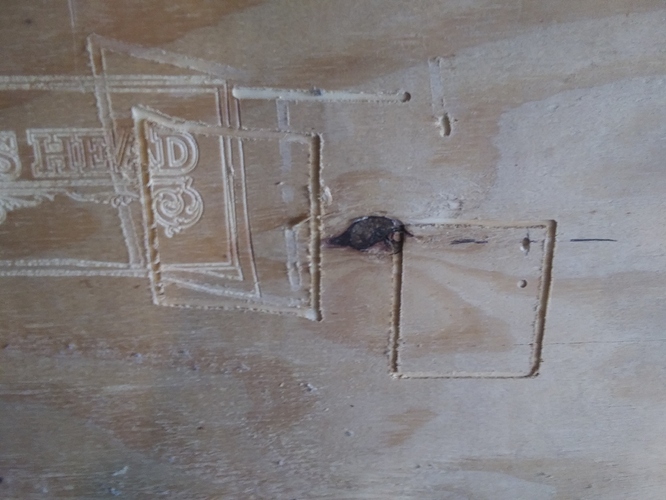 Then it skewered on the Y axis as well almost an whole inch off x and y!

After this it erased my ini file (which I did not think to make copy of), So I manually entered my config data and it gives unexpected sled movement error.

If I have to manually reconfigure this it will have been the 6th time. I am beginning to get frustrated as I have been trying to get this to work since 7/15.

This started out as me just trying to erase a unwanted line on a sign that kept appearing. Now it is unusable at all.

I just noticed that v1.27 incorporated a new kinematics method. I think it requires a recalibration to make it work.

Ok. Doesnt please me that I need to recalibrate. But I appreciate they continue to try and make this better.

I think if something is changed that force people to recalibrate, then it should be noted. Also, I’m a big proponent of giving people a means to not use the change until they are ready to recalibrate. We had a discussion regarding this in the holey triangular calibration thread but I was under the impression that the kinematics equations hadn’t been incorporated into a release. But I looked just today and saw a release was made last week and those changes were included. So, I can’t guarantee this is what cause the problem, but I suspect it is.

I just looked at the change log. My pull request is not included. Not sure how that got in there.

I think the sled weight and chain elasticity pr was backed out.

I just looked. The kinematics updates are from @c0depr1sm, merged on Jan 29.

I am pretty sure the kinematics updates should not cause this much change. At most, there would be about 6 mm change in the corners and at the top center. However, there are differences between this and the Holey Calibration implementation. I have not validated this.

Oh boy. I just remembered. There is a pretty big issue that I had to fix a while back, not in the main fork (the issue is in the main fork, but the fix is not). The chain stretch parameter is communicated from GC in scientific notation, but the firmware is not setup to read scientific notation. Because of this, everything gets messed up. This issue came with the pull request from @c0depr1sm.

Can you point me to the specific PR?

changed 3 files with 11 additions and 10 deletions.

changed 1 files with 10 additions and 2 deletions.

changed 2 files with 25 additions and 2 deletions.

changed 1 files with 3 additions and 6 deletions.

Here are the Firmware changes.

The chain stretch parameter is communicated from GC in scientific notation, but the firmware is not setup to read scientific notation. Because of this, everything gets messed up. This issue came with the pull request from @c0depr1sm.

So with the PR removed, this isn’t an issue>?

You would have to remove the PR on the GC side, as well.

Sorry for being slow… which specific PR in ground control needs to be removed? I’m just not following.

I couldn’t find it either. I thought there would be a corresponding GC commit, but I guess not. 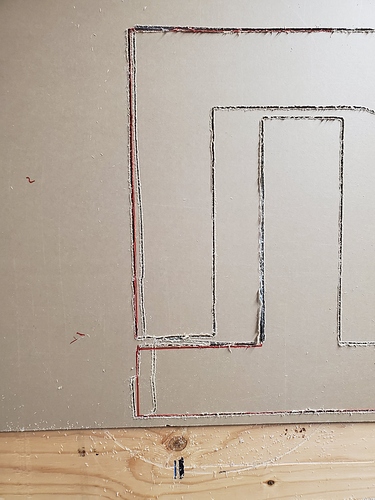 I’m having major issues with my machine as well! I’m cutting 3mm acrylic in 2 passes each with a depth of 2mm with a tab depth of 2mm. It seams that the first and second tool paths don’t line up at all. Im cutting from a 4’x8’ sheet of acrylic and seam to only have these issues while the machine is cutting on the left most 12" of the cutting surface. Ive pend in red roughly where the cut should have been.

I have discovered that in reality that my machine can only deal with 6x4 area accurately. Going with 12" of either end and I get errors.

This is using the standard table design with 10" top beam. 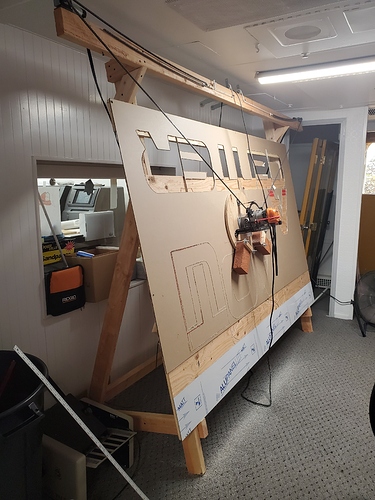 Im also working on the standard frame design (at least I think this one is the standard design). I do have room to extend the top beam to 12’ if necessary however I’ve been looking into replacing the 2x4 with the C channel used in the construction industry for securing electrical conduit. I hope that will combat the warping issue I’m running into with that wooden 2x4. I’ve also raised the top beam approx 18 inches after cutting 6 inches off the feet of the frame after I kept getting warning messages that the motors were too close to the top of the work surface. Lastly I have replaced the bungee cords with a counterweight system so that the tension is constant throughout movement. I don’t believe any of that would cause the issues Im running into but please correct me if I’m wrong about that. Thank you!