All 3 motors fail after rebuilding from destruction

I started this thread, when the thing went a little nutty and kept going up and up and up and the ring bent. My Maslow is destroyed, please help me figure out what happened

Eastbay sent me a new ring I installed and now I am trying to calibrate and the motors do not move. Here is the info that may be helpful

Seeing a failure on all three motors almost always indicates an issue with the controller not getting power, although since this is following a such a big event, lets take that conventional wisdom with a grain of salt. Can you confirm that the green light on the motor controller shield is illuminated, and that it goes on and off when you unplug and replug the power supply?

Don’t worry about sled position errors or sled not keeping up until you can get the motors/encoder test to pass. The controller is the same controller that you were using when things went bad?

Yes, everything is exactly the same , except the ring

Just spitballing here, but I wonder if something got damaged on the motor controller when the damage occurred to the ring. The picture you posted suggests that everything is hooked up correctly. I doubt all three motors could have failed since the z-axis probably wasn’t running… so I tend to look at the motor controller since the arduino board seems to be communicating with ground control.

Also, I had a problem one time when the power supply wasn’t fully inserted into the motor controller board.

So the green light on the motor control shield was NOT on. Other green lights were on. For shits I tried a new power supply that I bough when I screwed up previously. I plugged it in and everything works. Can’t imagine how that would go bad when I wasn’t even using it, but whatever. Thanks.

I’m very sorry for that, I can understand your frustration.

Please see if the main power cable (110v) is fully inserted in to the power supply, if it still does not work I’ll mail you a replacement immediately.

the most common failure is that the power supply got plugged into the arduino
rather than the motor shield, now that you’ve redone everything it’s hard to
know for sure, but put some tape or something over the arduino plug so you don’t
accidently plug it in the wrong place.

Can’t imagine how that would go bad

Wasn’t the original issue that the left and right motors ran until the ring was deformed? Each of the motor drivers will draw 6 amps at full throttle, and more for short periods. If the situation continues, they run in a reduced ‘chopper’ mode, continuing to run the motors at a reduced power.

With the L298-based motor control boards, the driver chips would have fried and the board would be unusable. With the TLE5206 board, the power supply as the next weakest link would be stressed.

I am using a version of the arduino board which has the power port blanked out, so that error is not possible. The The 110 v end of the power cable is fully engaged. @2cents if you want to send another that is fine, Right now I am using one that I bought on Amazon. It would not hurt to have a spare.

Interesting. IDK, but the thing is working like a champ at the moment.

It would not hurt to have a spare

Thanks for the help. Next one actually requires the CNC 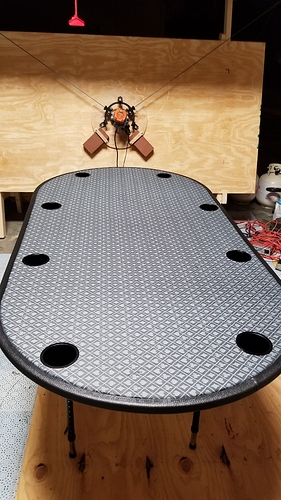