Hi there
Got the kit in 2018 but just started assemly.

The 18 wood screws that should be used to hold the L-Brackets to the sled don’t seem to make sense.
1 - they are too thick to even start going through the holes in the backet
2 - They seems really short at 9.5mm to hold on anything with the backets being 3mm thick.

So my questions:
1 - Did some of you enlarge the holes in the brackets ?
2 - Used different screws?

I’m thinking about 3D-printing a 1 or 2 holes filler-bushing to fill the large center hole and use a larger flat head bolt and nut going through it with a large washer to hold the bracket foot down.

Anyone has a similar issue and found a way around ?

The screws are pretty snug in the holes, but they should thread their way in. Are you not able to get them in at all?

The reason for keeping them short is that the sled itself can be quite thin so there isn’t much there to grab into. Because there are so many of them they end up being pretty strong, I haven’t heard of anyone having that connection break.

Thanks for the quick response!

I ended up, at least for now, using flat-head 6-32 machine bolts and nuts. This is the temporary sled made of 10mm Foam-PVC anyway.
I did just test going through a bracket hole with the included screw as suggested. I was under the impression it was too tight and didn’t dare at first but it worked.

I have ticket 2779 open to figure out the proper Z-Axis coupler to go with a Mastercraft Maximum 7mm (9/32) double-flat shaft. Should I ask here instead ?

Again thanks for the quick answer, the CNC idea and design aer great, the price incredible, the support and community fantastic! Can’t wait to see my own do its first cut.

got a response on my ticket. all good, thanks to the team.

Out of curiosity where was the ticket? We’re an open source project so we did the design and posted it for free. Several people sell kits based on our design, but we’re not really affiliated with them directly. I actually didn’t know there was a support ticket system

I may have gotten confused, I asked my question on Makermade’s website.

They were very nice and answered that unfortunately they didn’t have the proper coupler available and suggested an option on Amazon. They all seem to come from China so I ordered direct from AliExpress for a better price and the same ETA.

So in case you have another opinion or options, go ahead.

I have that router and ended up just disassembling the shaft with the worm gear and flipping it the other way around. The head of that shift is the perfect size for the coupler that comes in the MakerMade kit. 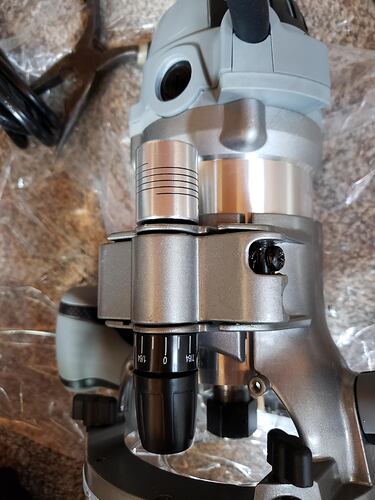 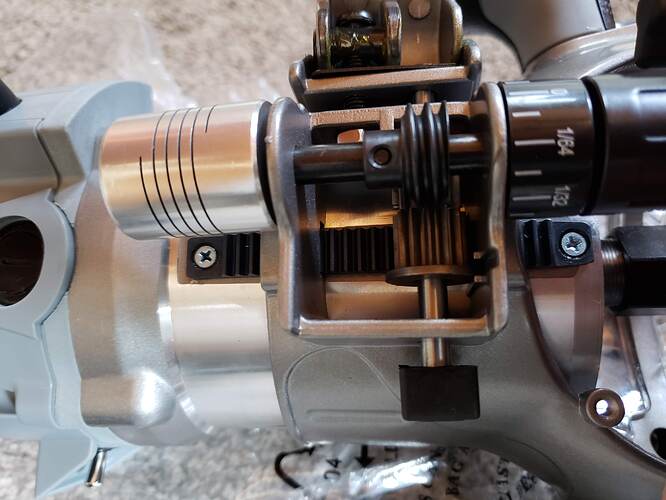 That’s brilliant! Funny thing I got the router used and took the gear assembly appart to clean it and broke the top c-ring so I did try a few things including putting the shaft upside down, didn’t occur to me later when I was looking at the coupler issue.

On your picture I don’t see the set screw for the worm gear. The hole in the shaft doesn’t allign, it puts the gear a little too high to engage with the other gear properly.

Does the shaft on yours have a flat side ? Mine is obvioulsy of a previous generation, all the knobs are yellow and the shaft is round and requires a screw to hold the worm gear.

Honestly its been a few years…

I flipped the shaft, but I also flipped the worm on the now upside-down shaft. I think I remember a flat.

Hope you’re able to make something fit, but I’ll say this: I didn’t use the stock adjustment knob for long. It was prone to binding in both directions when the router clamp was tightened to remove a reasonable amount of slop. I ended up switching to a c-beam z-axis a year later.

Thanks for your input Hentsch,

At least on my router, the set screw hole ends up higher when I flip the shaft and putting the worm gear upside down makes it worse. The worm gear skips big time by being not engaged deep enough.
But it was a interesting solution to look at. I got the coupler I ordered and now everything is connected as it should be.

I haven’t tested the whole thing yet and I feel I will be loooking at a c-beam upgrade pretty soon too. There’s a lot of dead movement in the original mechanism when reversing, no idea how this will affect the end result and if Groundcontrol compensates for it, I will probably look at the MakerMade M2 upgrade.

Information for anyone ending reading this: The Mastercraft Maximum router fine-adjustment shaft is not exactly 7mm but a little more, something a bit over 7.3mm. The 6mm x 7mm coupler was too tight but I fixed this by running an “L” (.29") drill bit through half of it. Z-Axis motor shaft fits right with the 6mm end.